Aller au contenu principal
Statement to the United Nations Security Council on the Situation in Libya, pursuant to UNSCR 1970 (2011) 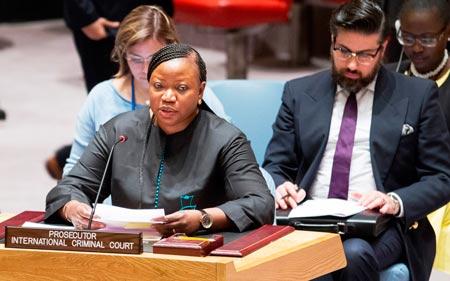 1. Thank you for the opportunity to once again engage with the Council as I present my Office's ninth report on Libya.

2. My Office welcomes the ongoing dialogue with Council members, and in particular, Rome Statute States Parties who continue, in ways large and small, to bring justice as a paramount issue to this Council's table. It is these efforts that can tangibly demonstrate that justice and peace are indeed complementary and can go hand-in-hand. My Office supports these efforts as an essential tool for facilitating the work of the International Criminal Court ("ICC" or "Court") in the halls of the United Nations and beyond.

3. Toward this end, I extend my sincere gratitude to the United Nations Support Mission in Libya, and in particular, its Rule of Law and Human Rights unit. The Mission's support for my Office in its ongoing assessment of admissibility of the Abdullah Al-Senussi case has been essential. In particular, I would like to acknowledge with thanks the notable commitment of UN Special Representative and mission head, Bernardino León. My Office looks forward to continuing to closely work with the Mission in the coming weeks and months.

4. Finally, I would like to express my gratitude to the Libyan Prosecutor-General's office for its ongoing professional engagement in implementing the November 2013 Memorandum of Understanding between the Government of Libya and my Office. Together, we remain committed to bringing fair and impartial justice to Libya's victims. Madame President, Your Excellencies:

5. The deteriorating security situation in Libya continues to be a matter of great concern not only for my Office, but for this Council and the broader international community. Innocent civilians continue to bear the brunt of the deteriorating security situation. The frequency and brutality of assassinations, terrorist attacks, threats to media workers, human rights defenders and women in particular are especially troubling. Libya continues to be split, with two governments vying for legitimacy.

6. The international community must be more proactive in exploring solutions in order to tangibly help Libya restore stability and strengthen accountability for Rome Statute crimes. Toward this end, my Office has encouraged the formation of an international contact group on justice issues through which material, legal and other support could be provided to Libya.

7. My Office is modestly contributing to these efforts by fostering cooperative efforts between investigative authorities in Libya and other countries. One proposal I submit before the Council is for a willing State, with substantial experience in transitional justice, to consider partnering with Libya to explore more concretely how such a contact group might be brought to life in the near future.

8. It is crucial for such efforts to include local actors, so that their voices and views on achieving justice are amplified and heard. My Office appreciates the efforts that the UN Support Mission in Libya as well as the Permanent Mission of Libya to the UN have made towards this end, and looks forward to continuing these efforts with these and other partners as we forge ahead in finding solutions for the crisis in Libya.

9. As I have suggested in my previous statements, the Libyan authorities should facilitate a visit by representatives from the local councils of Misrata and Tawergha to New York to meet and engage with Council members. My Office agrees with those who believe that facilitating a solution for the Tawergha issue will have symbolic importance and resonance in Libya. While it has not yet been possible to organize this visit, I believe that with the help of the UN Support Mission in Libya, the Libyan Mission to the UN, the Libyan focal point to the ICC, and other initiatives engaging with Libyan local leaders and civil society to promote justice, we can achieve results before our next briefing in November 2015. Madame President, Your Excellencies:

10. I have taken note of this Council's resolutions 2174 of 27 August 2014, as well as 2213 of 27 March of this year. Both reference the referral of the Libya situation to the ICC in UN Security Council resolution 1970, and stress the importance of the Libyan government's full cooperation with the ICC and with my Office. Like the Council, we deplore the increasing violence in Libya, and we are deeply concerned at the impact of this violence on Libya's civilian population and institutions. Accountability for those responsible for violations or abuses of human rights or violations of international humanitarian law is essential.

11. I have also taken note of this Council's call for accountability for the use of violence against civilians and civilian institutions by groups purportedly claiming allegiance to the Islamic State of Iraq and the Levant ("ISIL") or Da'esh. My Office considers that ICC jurisdiction over Libya prima facie extends to such alleged crimes. I recall however the principle that States, in the first instance, bear the primary responsibility to investigate and prosecute their nationals who have joined forces with ISIL/Da'esh and are alleged to be committing Rome Statute crimes.

12. Similarly, my Office continues to be concerned about alleged indiscriminate attacks in heavily populated areas by both Libya Dawn and Operation Dignity forces, resulting in civilian casualties, in particular in Benghazi, Tripoli, Warshefana, and in the Nafusa Mountains.

13. I reiterate my call to all parties involved in the conflict to refrain from targeting civilians or civilian objects, or committing any other crime that may fall within the ICC's jurisdiction, and to be vigilant and actively take all necessary measures to prevent the commission of such crimes.

14. My Office is actively considering the investigation and prosecution of further cases, and will not hesitate to take such action as may be needed to contribute to ending impunity in Libya or to contribute to such action by other relevant prosecutorial authorities. Madame President, Your Excellencies:

15. Although the Libyan Prosecutor-General's office in particular has engaged in fruitful cooperation with my Office, I must reiterate that there are specific areas in which the government of Libya is in non-compliance with the Court's orders. In particular, I recall that on 10 December 2014, the Pre-Trial Chamber found that Libya has failed to comply with the Chamber's requests to surrender Saif Al-Islam Gaddafi to the Court, to return to his Defence the originals of the documents seized in Zintan by the Libyan authorities from the former Defence counsel of Saif Al-Islam Gaddafi, and to destroy any copies thereof.

16. The Pre-Trial Chamber decided to refer the matter of Libya's non-compliance to the Council in accordance with regulation 109(4) of the Regulations of the Court. The Office notes that the Council referred to this decision in United Nations Security Council 2213 of 2015. The Office continues to press Libyan authorities to comply and to consult with the Court in order to resolve any problems that may impede or prevent execution of the requests. This Council is also encouraged to do the same.

17. The Rome Statute provides for such consultation, and in light of the continuing cooperation my Office receives from the Prosecutor-General's office, the importance of constructive consultations to address problems which may impede or prevent the execution of these requests is even greater. My Office will do whatever it can to encourage and facilitate these consultations, with the goal of ensuring Libya's full cooperation with the Court.

18. In relation to the case of Abdullah Al-Senussi, the Office stated in its last report to the Council that no decision had been taken at the time to submit a request for review under article 19(10) of the Rome Statute. As indicated, the Office had requested information on the national proceedings against Mr Al-Senussi from Libya and had taken steps to access data and analysis from independent trial monitoring sources.

19. The Office has since received information from the United Nations Support Mission in Libya on the domestic proceedings, as well as from the Libyan Prosecutor-General's office and from independent civil society members. Based on this information and on an internal analysis of available video recordings of selected trial sessions received from United Nations Support Mission in Libya, the Office has concluded that it is not in possession of new facts that would fully satisfy it that the basis on which the case against Mr Al- Senussi had previously been found inadmissible before the ICC has been negated.

20. This position is taken on the basis of information that is currently available to the Office and is subject to change should we receive further reliable information that would warrant a reassessment of this finding. The Office will continue to monitor the situation in Libya and the domestic proceedings against Mr Al-Senussi. Madame President, Your Excellencies:

21. In conclusion, I will simply restate that there is more that we can and must all do to ensure peace and justice in Libya. I will do my part in the effort to end impunity, and I look forward to working with our partners in Libya and amongst Libyan civil society and grassroots leadership, at the UN, amongst the Rome Statute States Parties, and with the Libyan Mission to the UN, to bring these plans to fruition.

22. I thank you, Madame President, Your Excellencies, for your attention.