Skip to main content
Trust Fund for Victims decides to provide $1 million for the reparations awarded to victims in the Katanga case, welcomes earmarked donations of €200,000 from the Netherlands

Trust Fund for Victims decides to provide $1 million for the reparations awarded to victims in the Katanga case, welcomes earmarked donations of €200,000 from the Netherlands 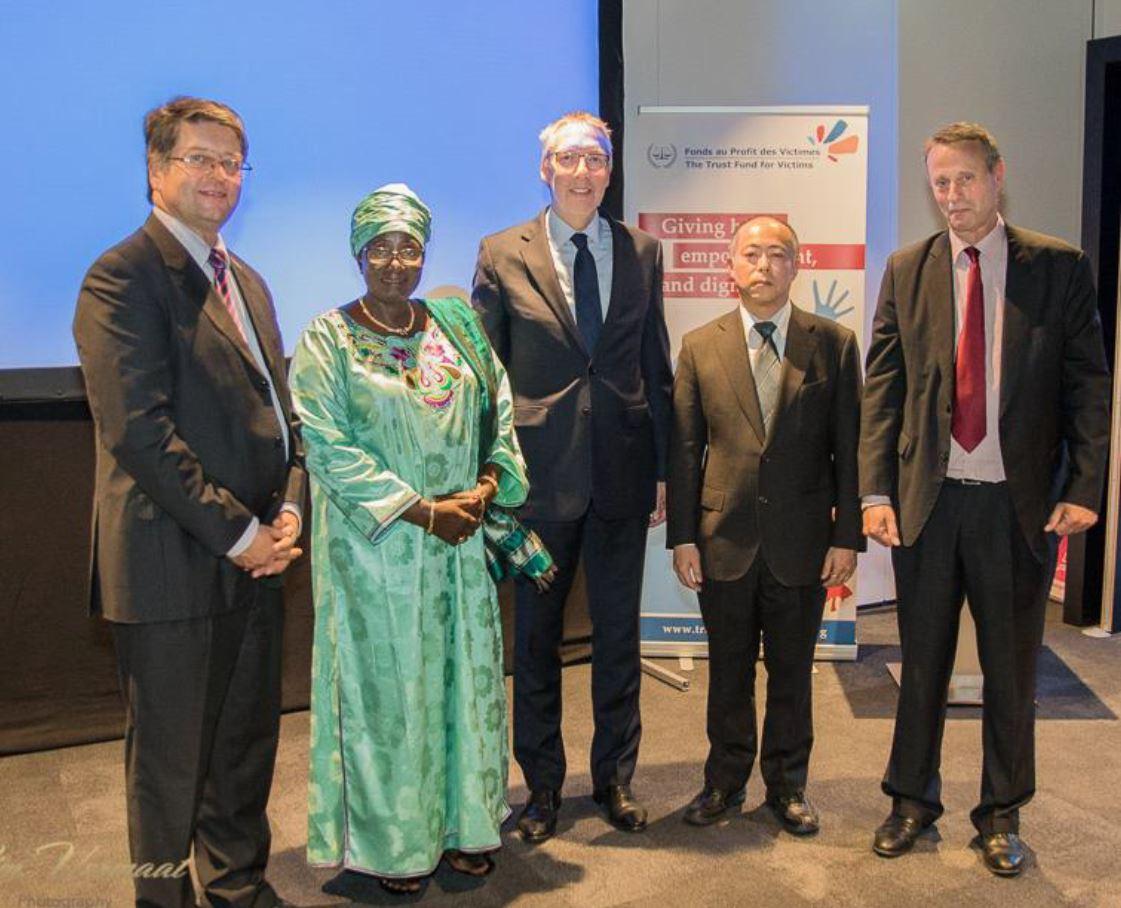 On the second day of its 16th Meeting, occurring from 16 to 18 May 2017, the Board of Directors of the Trust Fund for Victims ("the Trust Fund" or "TFV") at the International Criminal Court ("ICC") decided to provide $1,000,000 USD to pay for the individual and collective awards for reparations ordered by Trial Chamber II in the case of The Prosecutor v. Germain Katanga. This means that the full amount of the costs of the reparations awards ordered by the Trial Chamber on 24 March 2017 will be initially provided by the Trust Fund.

"The Rome Statute's innovative inclusion of the potential to award reparations to victims following a criminal conviction underscores the victim-centred approach of the entire Rome Statute system. As established by the Court, 'reparations oblige those responsible for serious crimes to repair the harm they caused to the victims'. Reparations therefore are a critical part of the reparative justice afforded to victims under the Rome Statute.

In light of Mr Katanga's indigence and while recalling that he nonetheless remains liable for the reparations ordered against him, it is our sincerest hope that the Trust Fund's complement of $1,000,000 USD to the payment of the awards for reparations will ensure that the victims in the Katanga case receive the real tangible benefits of these awards and that they are received in a timely manner."

The Trust Fund will now present to the ICC judges – by 27 June 2017 – a plan for implementing the individual and collective reparations in this case, describing the projects it intends to then develop.

The Trust Fund's resources come mainly from voluntary contributions from States Parties, foundations, and individuals. In order to ensure that it has adequate resources for its assistance mandate activities and to complement the payment of awards for reparations that may be ordered in currently ongoing or future cases, the Trust Fund also solicits and encourages donations specific to ordered awards for reparations, which permit it to avoid depleting its reparations funds reserve.

Yesterday, 17 May 2017, the government of The Netherlands, a State Party to the ICC and long-time supporter of the Trust Fund, announced that it will make a voluntary contribution of €200,000. This donation is earmarked for the full payment of the individual awards for reparations ($74,250) and to go towards the collective reparations awards (the remaining $925,750) in the Katanga case.

"The compensation may provide relief to the victims in the Democratic Republic of the Congo. They have suffered so much already and we cannot have them wait any longer"

"The Netherlands earmarked donation to the Katanga case victims help ensure that the reparations awarded to these victim survivors do not remain simply words on a legal document, but instead result in the victim survivors of Mr Katanga's crimes receiving tangible and meaningful reparations to remedy the harms they have suffered and begin their journey on a path of recovery, healing, and creating a better future for them, their families and their communities. We are grateful to The Netherlands for this important donation and encourage other State Parties to join in making the Rome Statute's promise of reparations to victims a reality by making a voluntary contribution to the Trust Fund."

1. The Katanga case Order for Reparations

On 24 March 2017, in the case of The Prosecutor v. Germain Katanga, Trial Chamber II issued an order for reparations against Mr Katanga in the amount of $1,000,000 for the benefit of 297 victims. The Trial Chamber awarded individual reparations in the form of symbolic compensation in the amount of $250 per victim (totalling $74,250) and four collective awards (combined totalling $925,750) in the form of housing assistance, education assistance, income-generating activities, and psychological rehabilitation.

In view of Mr Katanga's indigence for purposes of reparations, the Trial Chamber requested that the Board consider using its discretionary authority under regulation 56 of the TFV Regulations to complement the payments of the individual and collective awards for reparations.

2. The Trust Fund's complement of the payment of reparations awards

3. The two mandates of the Trust Fund

The Trust Fund was created under article 79 of the Rome Statute. The Trust Fund's mission is to respond to the harm resulting from the crimes under the ICC's jurisdiction by ensuring the rights of victims and their families through the provision of reparations and assistance. To achieve its mission, the Trust Fund fulfils two unique mandates: 1) providing assistance to victims and their families in ICC situations through programmes of psychological rehabilitation, physical rehabilitation, and material support; and 2) implementing reparations awards ordered against a convicted person by the Court.

Under its assistance mandate, the Trust Fund provides assistance for the benefit of victims and their families in ICC situation countries through programmes of psychological rehabilitation, physical rehabilitation, and material support. Because it is not linked to any particular case before the ICC, the assistance mandate permits the Trust Fund to provide an immediate response, at the individual, family and community level, to the urgent needs of victims who have suffered harm from crimes within the ICC's jurisdiction. It also permits the Trust Fund to assist a wider victim population than only those who have suffered harms connected to specific cases before the Court.

Since 2009, the Trust Fund has supported locally-based implementing partners that work directly with victims under the Trust Fund's supervision in the Democratic Republic of the Congo ("DRC") and northern Uganda.

In total, more than 350,000 victims have benefitted from Trust Fund supported assistance activities in these two countries. Many of these victims were subjected to physical and psychological violence and continue to live with trauma associated with unaddressed mental health conditions. In both the DRC and Uganda, victims include inter alia survivors of sexual and gender-based violence, child mothers, former (male and female) child soldiers, girls formerly associated with armed groups, returnee communities, disabled persons and amputees, disfigured and tortured persons, and other vulnerable children and young people, including orphans.

On 16 May 2017, the Trust Fund Board decided to launch a new assistance programme in a third ICC situation country, Côte d'Ivoire, to provide physical, psychological rehabilitation and material support for the benefit of victims of crimes under the ICC's jurisdiction. The Trust Fund hopes to have ongoing assistance projects in Côte d'Ivoire by 2018 and has obligated 800,000 EUR for this purpose.

After a near decade of focussing on assistance projects, the Trust Fund's reparations mandate is now beginning to play a larger role in the Trust Fund's work as the first criminal proceedings of the ICC conclude. With four cases reaching the reparations stage in 2016, this represents an exciting and important opportunity for the Trust Fund to develop and strengthen its institutional partnership with the ICC in order to ensure that the reparations regime laid out in the Rome Statute is successful.

Each of the four cases now at the reparations stage involve different crimes which have resulted in diverse and distinct harms to the victims and their families. In partnership with the Court, the Trust Fund's task is now to ensure that the design and implementation of awards for reparations are responsive to the specific harms suffered by victims in each case as found by the respective Trial Chambers, and that, through their efficient and timely implementation, the promise of reparations can become a concrete and meaningful reality for victims, setting them on a path to healing and positive reintegration within their families and communities.

The Board of Directors of the Trust Fund for Victims at the ICC are elected every three years by the Assembly of States Parties. The five members come from different regions in the world. They are elected for a mandate of three years and may be re-elected for one second term. Board members function in their personal capacity and on a pro bono basis.

Pieter de Baan is the Executive Director of the Trust Fund for Victims, heading the TFV Secretariat.