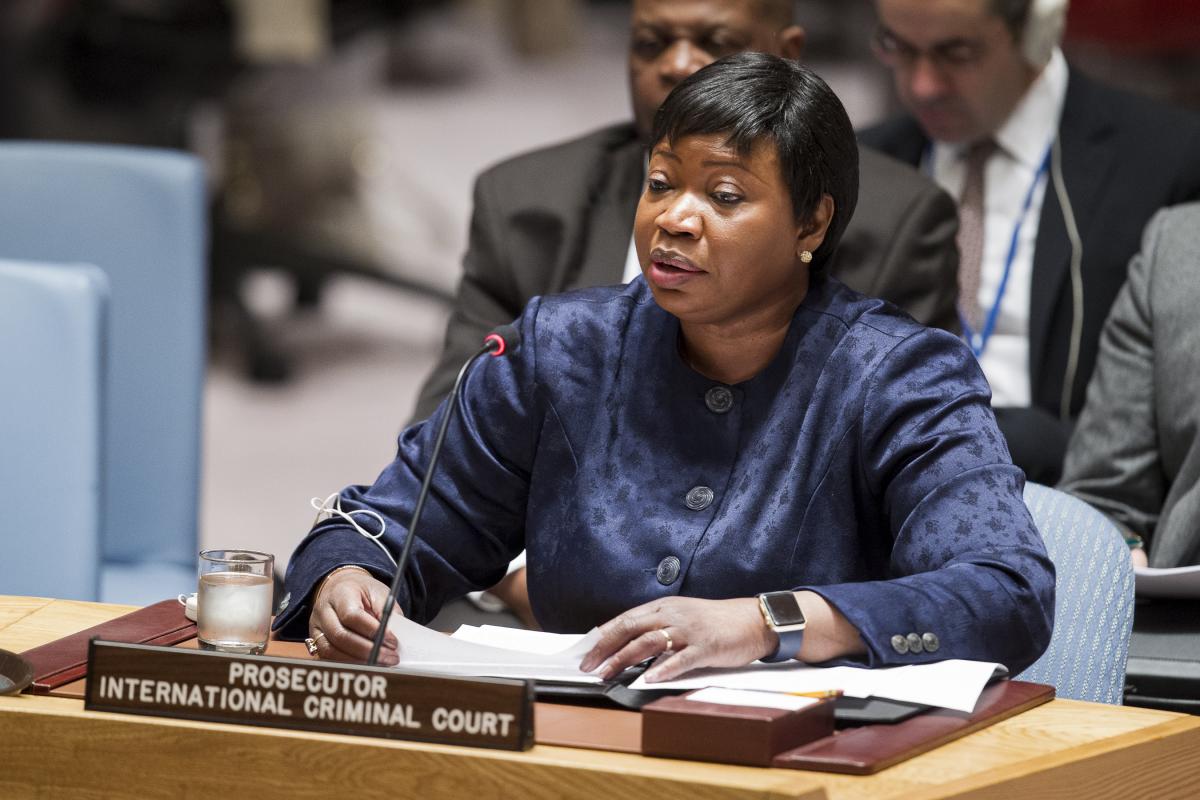 1. It is a distinct honour to once again be at the Council's table to present my Office's eleventh report on the Situation in Libya pursuant to Resolution 1970, unanimously adopted in 2011.

2. This honour is all the more pronounced given that I address the Council under your Excellency's Presidency, having just returned from a most productive official visit to Cairo where I engaged with relevant Government Ministries on issues of mutual concern, including the Situation in Libya, its spill-over effects and the threat of Daesh on Egypt and more generally, on the Middle East and North Africa.

3. I would be remiss if I did not benefit from this occasion to reiterate my sincere appreciation for the warm hospitality extended to me and my delegation in Cairo.

4. I assure you, Mr President, of my Office's readiness to continue our constructive dialogue with the Egyptian authorities and to follow-up on the matters so helpfully explored in Cairo. I am confident that my Office's engagement with Egypt will lead to positive results.

5. The last six months have witnessed significant developments in Libya's slow and difficult process towards the establishment of a unity government. On 17 December 2015, participants in the political dialogue representing broad segments of Libyan society signed a United Nations brokered agreement on forming a government of national unity. United Nations Secretary General, Mr Ban Ki-moon expressed hope that "the signing of the agreement will put Libya back on the path of building a democratic State based on the principles of inclusion, human rights and the rule of law."

6. It is equally my Office's hope that the signing of the Agreement marks the beginning of the end of the long period of turmoil and conflict in Libya.  Justice, accountability and the deterrent effects of the law remain critical components for achieving lasting peace in Libya, and my Office stands ready to work collaboratively with the Government of National Accord in its efforts to build a secure, peaceful and prosperous Libya for all Libyan people.

7. To this end, I encourage the Government of National Accord to give priority to devising effective plans and strategies to address atrocity crimes, and to invest in the relevant national institutions responsible for such critical work.  This will demonstrate, in concrete terms, that justice and accountability constitute key Government priorities underpinning efforts to ensure peace and stability in Libya, and that the victims will have the opportunity to seek redress through the Libyan courts.

8. Similarly, over the same period, my Office's investigations into the Libya situation have progressed, albeit at a slower pace than we would have liked due to lack of sufficient resources and the prevailing precarious security situation in the country. Despite these   challenges, our investigations are continuing to yield positive results, in large part due to the cooperation of the Libyan Prosecutor-General's office from whom the Office has received numerous documents pursuant to the Memorandum of Understanding entered into by my Office and the Libyan government in 2013.

9. Notwithstanding limited resources and the inability at the present time to conduct in situ investigations in Libya, my modest Libya team has been able to pursue leads and other avenues of collecting evidence through our investigations.  My Office is continuing to carefully analyse and assess the evidence in our possession to determine whether the requisite legal standards are met to request additional arrest warrants.

10. In short, Mr President, notwithstanding the numerous challenges that we face, my Office remains firmly committed to its mandate vis-à-vis Libya, and will continue to be focused and industrious in the fulfilment of that mandate.

11. As highlighted in my latest Report, the Situation in Libya requires collaboration and coordination between all relevant actors at the national, regional and international levels.  The support of this Council remains equally crucial. Success in Libya therefore depends on the collective determination and the will of all relevant actors to meaningfully contribute to the course of bringing perpetrators to justice and by so doing, help deter the commission of future crimes.

12. The threat of Daesh or other groups proclaiming allegiance to Al- Qaida remains real and the consequences are too costly to be ignored. They include instability and the dire humanitarian situation in Libya and instability, which in turn result in mass migration, and the spread of terrorism in the country and the region.

14. I remain convinced that increased cooperation between and amongst relevant actors as well as coordinated investigative activities are key for tackling national, transnational and international crimes that continue to plague Libya and for ensuring that those responsible for committing these crimes have no safe haven anywhere.

15. In this regard, I am particularly pleased with the interest and efforts thus far by national law enforcement agencies to coordinate with my Office, with each other and with Libyan authorities. The international community has invested significant capital into restoring security in the country. While nascent, this growing network is beginning to take shape as it explores efforts to share essential information and strategies for tackling criminality in Libya. Those who finance or encourage the commission of grave crimes in Libya must understand clearly that they will be held accountable.

16. As the Government of National Accord assumes its duties, we recall that Libya remains under a positive legal obligation to immediately arrest and surrender Mr Saif Al-Islam Gaddafi to the International Criminal Court ("Court"); a fact noted by this Council in Resolution 2238.

18. The unique factual circumstances of this case and the lack of progress also justify the adoption of complementary, exceptional and innovative measures. It bears emphasising that Libya has submitted to the Court that "Mr Gaddafi continues to be in custody in Zintan and is presently 'unavailable' to the Libyan State." As such, as part of its on-going efforts to enhance prospects for Mr Gaddafi's surrender, my Office recently filed a request with Pre-Trial Chamber I for an order directing the Registry to transmit the request for arrest and surrender of Mr Gaddafi directly to Mr al-'Ajami al-'Atiri. Mr al-'Atiri is  the Commander of the battalion that is detaining Mr Gaddafi in Zintan. The Pre-Trial Chamber is yet to issue its decision on this request. In the event that the request is granted, the Office hopes that Mr al-'Atiri and the battalion he commands will cooperate and surrender Mr Gaddafi to the custody of the Court to be tried. Should he fail to comply, this Council should consider adopting appropriate measures to ensure compliance with the Chamber's order.

19. In relation to Mr Abdullah Al-Senussi, the Office has received a copy of the written judgment of the Libyan court in relation to his case and has conducted a preliminary review of the judgment. At this time, the Office is not in possession of facts which would satisfy it that new facts have arisen which negate the basis on which Pre-Trial Chamber I found Mr Al-Senussi's case inadmissible. The Office will continue to review its assessment if and when new relevant facts become available.

20. While the Appeals Chamber has recognized that, in the context of admissibility proceedings, the ICC is not primarily called upon to decide whether domestic proceedings violate certain requirements of human rights or domestic law, it is incumbent upon the Government of National Accord to ensure that the highest standards for investigations and prosecutions are met. In this context, I am encouraged that arrest warrants have been issued for those individuals suspected of committing crimes, including torture, in Al Hadba prison. Follow-up actions for their arrest and prosecution must be undertaken. I will continue to encourage and follow the Libyan authorities' efforts to investigate the allegations of torture at Al Hadba prison and to bring those found responsible to justice.

21. My Office remains concerned about ongoing civilian deaths, with reported executions by Daesh accounting for the majority of these, although civilian deaths continue to also result from the Libya Dawn-Libya National Army conflict. Moreover, abductions, detentions, and ill treatment in detention centres continue to be reported on all sides of the conflict.

22. The Mediterranean-Libya migratory route to Europe remains a popular option among refugees and migrants who are particularly vulnerable to violence, sexual violence and ill-treatment in Libya. Detention of thousands of migrants continues to be a source of financing for many militant groups in Libya.

23. We as, the international community, must take a closer look at who profits from criminal activity in Libya, and take coordinated steps to prevent further violations. This must be a priority for all who are affected by the criminal trafficking of human beings.

24. For its part, the Office continues to carefully evaluate how to best utilise its limited resources to maximise its impact on the present situation in Libya. While the Office is continuing its investigations into officials linked to the former reign of Mr Muammar Mohammad Gaddafi, it is also focused on on-going crimes in Libya. Despite resource constraints, the Office is assessing the potential to expand its investigations into these new crimes, such as those alleged to have been committed by Daesh and Ansar Al-Sharia. However, the Office recalls and stresses that States have the primary responsibility to investigate and prosecute their nationals who have joined the ranks of Daesh, Ansar Al-Sharia and other militias operating in Libya.

25. I must reiterate that until my team is able to carry out investigations in Libya, and until the issue of resources is resolved, the Office will simply be unable to advance the investigations as rapidly as desired.

26. We are optimistic, however, that in the coming months, we will be able to resume our functions in Libya, and accelerate our efforts to bring to justice those responsible for Rome Statute crimes, in coordination with key partners in and outside of Libya.

27. Here, I would like to acknowledge and commend the critically important work being carried out by the United Nations Support Mission in Libya ("UNSMIL").  I had the pleasure of receiving the Head of UNSMIL and Special Representative of the Secretary General, Mr Martin Kobler in The Hague earlier this week, and canvassed the many areas where our respective offices can enhance cooperation in accordance with our independent mandates.  Mr Kobler and I both agree that accountability for the grave crimes under the Rome Statute is indispensable to stability and sustainable peace in Libya.  This meeting of the minds and recognition must translate into concrete positive changes on the ground.  We are determined to do just that in close collaboration with the Government of National Accord.

28. I greatly appreciate the efforts of all States that have engaged and cooperated with the Office in support of our investigations in Libya, including neighbouring Tunisia and the Hashemite Kingdom of Jordan. I also encourage all States to intensify their efforts to support investigations and prosecutions of Rome Statute crimes alleged in Libya. Finally, I call upon all States that have not responded to Requests for Assistance to do so without further delay. State cooperation with the Office is indispensable for the success of its work in Libya and all other situations under investigation.

29. Libya and the Libyan people deserve peace and stability on which to secure and build their future; they deserve the rule of law and by the law rather than lawlessness and the current climate of perpetual insecurity and flux.

30. To conclude, Mr President, we must continue our work, albeit under difficult circumstances. Where we work together in an intelligent, reflective and coordinated manner, we can help make a difference in restoring stability in Libya.  This Council and the international community must stay committed to Libya and help it emerge triumphant in the face of adversity.

31. Nations are not built overnight, but to last and to withstand the challenges of the 21st century they must be built on strong foundations.  Justice will always serve as a central pillar.

32. I thank you for your attention.