Skip to main content
Statement of ICC Prosecutor, Karim A.A. Khan QC, to the United Nations Security Council on the Situation in Darfur, pursuant to Resolution 1593 (2005)

Statement of ICC Prosecutor, Karim A.A. Khan QC, to the United Nations Security Council on the Situation in Darfur, pursuant to Resolution 1593 (2005) 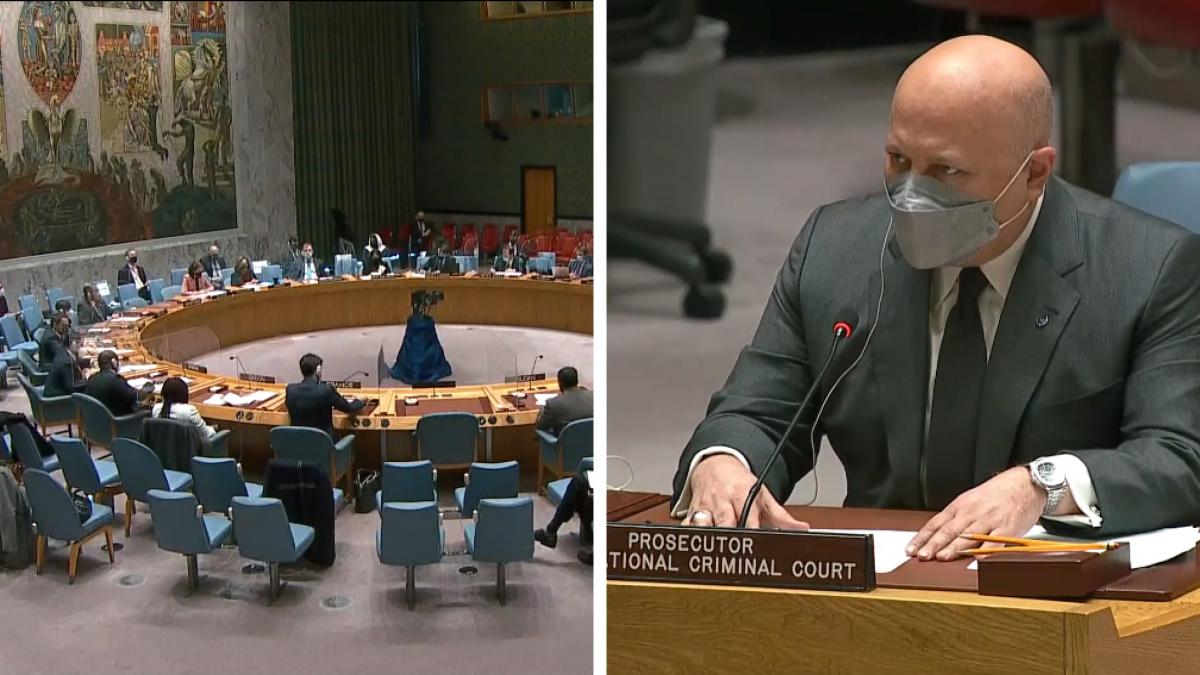 Madam President, your Excellency,
Distinguished members of the Council,

1. Firstly may I congratulate Norway for its presidency of the Council this month. It is a real honour to have the opportunity in this new year to present the 34th report of the Prosecutor of the ICC in relation to the Darfur situation in Sudan, pursuant to Resolution 1593 that the Council passed of course in 2005. Despite the strictures of COVID and the wearing of masks, it is wonderful even with these constraints to be here in person.

2. I would like to begin Madam President, if I may, by recalling what I said when I was meeting with Darfur survivors and victims, when I was in Khartoum on the 17th of August last year. I convened a meeting with Darfur civil society. Many individuals have been struggling for almost two decades for something that should be simple but seems extremely complex, namely justice, a modicum of accountability that underlines the fact that every life matters. They have struggled and they have shown perseverance, in relation to crimes that have unfortunately characterised a generation at least of men, women and children. It was that suffering that led this Council to use its Chapter VII powers in 2005 and refer the situation to the ICC. I share the frustrations, the impatience and the hopes of those survivors that that singular moment, the first referral by the Council to the ICC, will reap dividends. Expectations are not unreasonable, it is simply that there should be some justice.

3. The victims, the survivors, the people of Darfur have shown that persistence, but it is important, as I said in my interactions with Sudanese government members, that this referral cannot be a never-ending story. It cannot be. We are approaching middle age: 34 reports. We need collectively to do better – my Office of course, but also this Council – to make sure the promise and the purpose of the referral is wedded with concrete action. There is sign for hope, and there has been progress notwithstanding difficulties that remain. In July of last year, all 31 charges relating to a notorious Janjaweed leader, Ali Kushayb, were confirmed and the trial has been set down to start on the 5th of April of this year. The charges include war crimes, crimes against humanity, murder, rape, torture, attacks against the civilian population in Wadi Salih and Mukjar. That's an important moment. This year in just three months' time, the promise of the Council will start being demonstrated in action by the allegations that the Office have proffered, being placed before independent and impartial judges.

4. At the same time, outreach is important. And also I am hoping to work with the Registry of the Court to make sure there is an organised and effective outreach program so that Sudanese people in Sudan, in Darfur or outside can follow the proceedings because they have a right to know what happened, and they have a right to see the truth. But the Ali Kushayb case is one case; there are of course four warrants outstanding: The case against former President Omar al-Bashir; the case against the former Minister of Interior, Abdul Raheem Mohammad Hussein; the former Governor of South Kordofan, Ahmad Harun; and the case against the former JEM rebel Commander Abdullah Banda. In relation to Abdullah Banda, I recused myself from that case and that case is being supervised directly by the Deputy Prosecutor.

5. It is important, as I said in relation to my Libya briefing in December, that during my term I wish to prioritise cases that have been referred by the Council. And I started that in the Sudan situation by conducting a review of the evidence to look at the strength of those cases. And I also ensured additional resources are brought into that situation so that we can hopefully be more effective. But the reality is this: that for a variety of reasons over the last 17 years, including the non-cooperation of the government of Sudan by the previous administrations, there were no field investigations in the country. And my predecessor hibernated for a long period this situation so that investigations did not mature. As a result, I realised that the evidence particularly against Mr al-Bashir and Mr Hussein needs strengthening. I am satisfied with the strength of the evidence regarding Ali Kushayb but in relation to those two cases I have mentioned, we need to make sure we do better. And that requires cooperation from Sudan. It requires assistance from Sudan and it also requires cooperation, collaboration from members of this Council and member states of the United Nations.

6. In that evidential landscape I have given more resources to the team, put more investigators on the case, also people with Arabic language skills as well. And immediately in August, two months after my term commenced, I went to Sudan to speak to the government, realising the importance of cooperation. That brought tangible results, because for the first time, we concluded a memorandum of understanding, not only in relation to Ali Kushayb, but in relation to all four of the cases for whom judges of the ICC have issued warrants. I also appointed a pro bono special adviser to focus exclusively on the Darfur situation so we can move together, get cooperation to a greater extent and that is Ms Amal Clooney. And again, this is evidence of my intent not just to say I am prioritising Security Council referrals but to make sure that the resources that are needed are put into that case.

7. During my trip to Khartoum in August, we had some constructive meetings. I met with General al-Burhan of the Sovereignty Council, then Prime Minister Hamdok and Foreign Minister and Minister of Justice. We also met UNITAMS' SRFS Volker Perthes and members of the international community. And in this, I also underlined a new approach: it is not – and this is the beautiful thing about the law, there are many different solutions to one fundamental problem – it is not the location of trial or even the forum of adjudication that is critical. What is critical are independent and impartial investigations, independent and impartial adjudications, and then the rule of law that should triumph so victims can move forward, realising that everything has been done to try to ensure justice. And I emphasised to the government members that I would be willing to use the full panoply of options that are entwined in the Rome Statute to try to make sure that we can work together and forge better bonds so that this chapter could be closed. But the simple issue is this: if we don't accelerate cooperation between the government of Sudan and my Office, investigations will keep continuing.

8. If we are to carve out a road map for the completion of this situation in the way that I believe the Council wants, that the victims want, the way to do it is to accelerate, to inject more cooperation and assistance within the Office. And if that is done, I think we can move forward in an effective way.

9. On the 25th of October, of course the landscape changed and that has not been particularly helpful. In my meetings in August, not only was the Memorandum of Understanding (MoU) signed, there had been commitments by the government to sign the Rome Statute, there had been commitments to work more closely with my Office, and there had been the agreement to help ensure a permanent field presence of the Office of the Prosecutor in Khartoum. But the hiatus from the 25th of October has meant that we have lost focal points. We are trying to catch up. We had to for a couple of months – in fact, until now – we had to suspend active investigations. And so this was a very troublesome or concerning turn of events. The upside is that just before Christmas, my team went to Khartoum again. They spoke to General al-Burhan and General al-Burhan reassured members of my Office that the MoU was still valid, that he was looking at cooperating and he said, on more than one occasion to me directly and to the team in December, that it was essential to have justice for the victims in Darfur. The challenge now collectively, for all of us, is to make sure those assurances are translated into concrete tangible partnerships and accountability.

10. This is a delicate stage of course in the transition in Sudan, but I would underline again the only option for us to move forward and close this situation or find a pathway towards closure is accelerating cooperation. I mentioned this on Friday with the distinguished representative of Sudan, Ambassador Elbahi. And I also emphasised that these cases are not against Sudan. Sudan is a partner, not an adversary. They are against individuals for whom the evidence discloses their responsibility in relation to crimes within the jurisdiction of the Court. We do need safe and secure access to Sudan. We need safe and secure access to the archives. We need to be able to look at where the mass graves are and we need to be able to go to all parts of Sudan and work independently. This is required not just by the MoU that was signed in August of last year, it is not only required by Resolution 1593, it is also required by the Juba Peace Agreement. So there is this tripartite tiers of responsibilities, of commitments, that I hope very much the Sudan will honour and work with us more closely.

11. Cooperation from outside of Sudan is also critically important, and we have had fantastic support from the European Union, from African States, from other countries, including Norway, the United Kingdom, the United States of America and the People's Republic of China. Really, this is an area, if we are to close this chapter and allow Sudan to move forward, there can be no passive spectators, we have to help the Sudanese people get what they deserve, which is justice and closure. I hope to go again to Sudan in the next period, in the next few months, I hope around April time. Hopefully I have been promised that will be facilitated, including going to Darfur, speaking to some of the survivors and victims and displaced people there. I am ready to try to build an acceleration in the work across the cases that are before the Court.

12. I do want, Madam President, with your leave, to speak directly to those victims, to underline during my term that we have an unwavering commitment to ensure that the intention of this Council in the landmark decision of 2005 is honoured and respected. That we can have proper rigorous investigations to put before judges what the truth of the matter is. And in my view, and I'll be quite candid about the state of the evidence but I'll also be quite candid about one simple truth: Sudan runs the risk of always being defined by the past conduct, by the events that compelled this Security Council to act in 2005 until and unless we get justice. If we work together, if we work in partnerships, the Office of the Prosecutor, the government of Sudan, this Council, member states, we can close this chapter. And if we close that chapter, I believe unencumbered and relieved by some of the burdens of the past, by ensuring justice, Sudan will have every possibility to do something which every Council member wants, which is to write a new chapter so it can march forward to a better and more prosperous and safer future. So thank you so much for your time and this is my report.