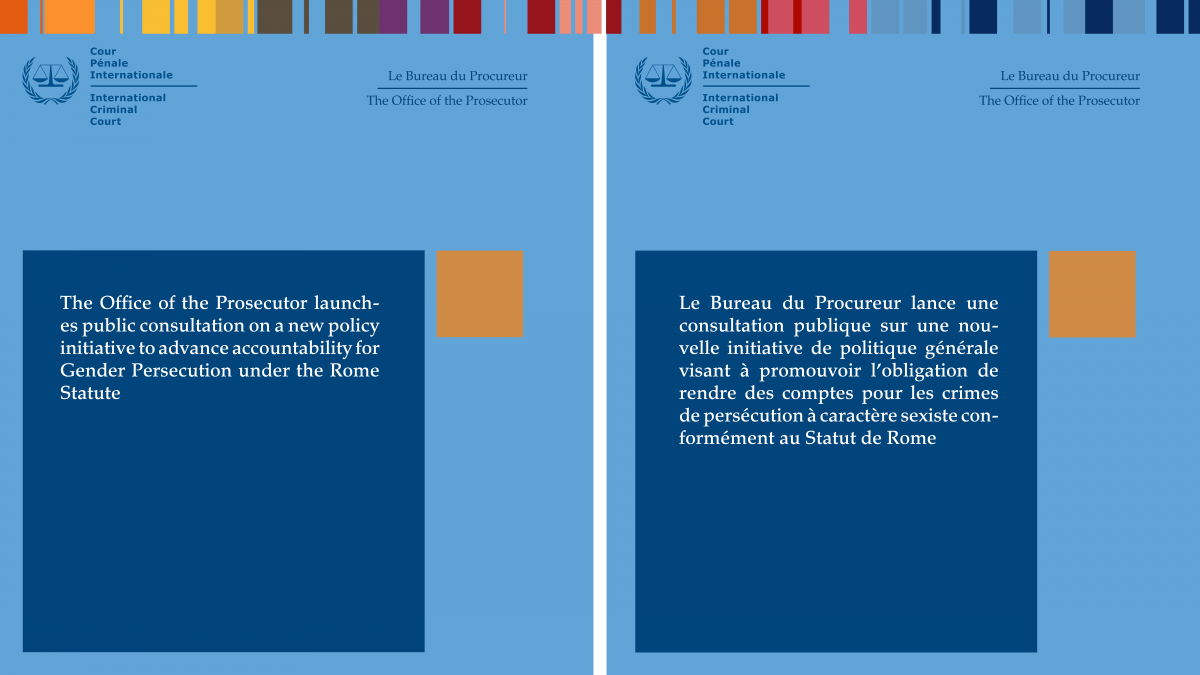 The Prosecutor of the International Criminal Court, Mr Karim A.A. Khan QC is pleased to announce a new policy initiative to advance accountability for the crime against humanity of persecution on the grounds of gender under the Rome Statute. This policy initiative, which will culminate in a comprehensive policy paper, will aim to describe and guide his Office in ensuring a systematic approach to dealing with such serious crimes from the outset of the preliminary examination process to investigations and prosecutions.

Complementing and building on the 2014 Policy Paper on Sexual and Gender-Based Crimes, this new policy initiative will help to further promote accountability, transparency and predictability in the work of the Office in this crucial area. The policy will be developed on the basis of the Rome Statute and other regulatory instruments of the Court, as well as applicable treaties, and the principles and rules of international law. It will also draw on the jurisprudence of the Court and other relevant jurisdictions.

Through this announcement, the Prosecutor invites comments early in the development of this policy initiative, calling for input on, inter alia, the nature, scope and the different elements and grounds the policy ought to include, cover and address.

In highlighting the importance of the policy and stakeholder consultation, Prosecutor Khan stated: "gender persecution as a crime against humanity takes many forms, and is indeed linked to other crimes under the Rome Statute. I am firmly committed to ensuring that my Office systematically addresses sexual and gender-based crimes, and takes a deeper and focused approach to investigating and prosecuting gender persecution. This latest policy paper initiative is another commitment to this necessary objective."

Professor Lisa Davis, Special Adviser to the Prosecutor on Gender Persecution will be assisting the Prosecutor and the Office in developing this policy. "Sexual and gender-based crimes are among the gravest under the Rome Statute. As mentioned by the Prosecutor, holding such crimes that meet the threshold for persecution accountable is a key priority for the Office. This policy will contribute to furthering effective investigation of gender persecution, and enhancing access to justice for victims of these crimes", stated Professor Davis.

In this first round of external consultations, the Office welcomes and encourages comments on the substance of the policy initiative/paper early in the drafting process and prior to the first draft being produced and circulated for further input. The Prosecutor is of the view that external consultations on its policies and working methods are important for maintaining and furthering transparency and predictability, and generating the most comprehensive policies. Comments will therefore be sought during the drafting process: first before the draft has been formulated, and a second round to solicit more specific and focused feedback.

Comments can be sent to [email protected] by Friday, 18 March 2022, midnight, CET. All input received by the deadline will be carefully considered in the internal review and revision process.

The Office is grateful for the interest and support of the Rome Statute community for its activities and initiatives.