Skip to main content
Journalists in Bangui, Kinshasa and The Hague put questions to parties and participants in the trial of Jean-Pierre Bemba Gombo

Journalists in Bangui, Kinshasa and The Hague put questions to parties and participants in the trial of Jean-Pierre Bemba Gombo 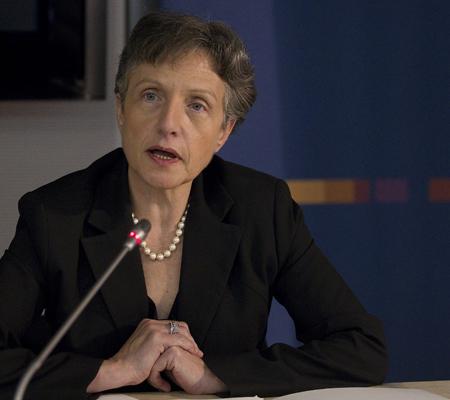 Today, at the beginning of the press conference at the seat of the International Criminal Court (ICC) on the commencement of the trial in the case of The Prosecutor v. Jean-Pierre Bemba Gombo, the speakers stressed the paramount importance of respecting the rights of the parties and participants in the proceedings before the Court. The Registrar of the Court, Ms Silvana Arbia, stated that “only through a fair trial can the law play its proper role in establishing lasting peace and fighting effectively against impunity for crimes which are […] of concern to the international community as a whole and which deeply shock the conscience of humanity”.

From the Court’s offices in Bangui, the Central African Republic and Kinshasa, the Democratic Republic of the Congo, local journalists were able to put their questions to the parties and participants in the trial of Mr Bemba via video conference. The press conference was further enlivened by journalists in the Court’s press briefing room at The Hague.

“Jean-Pierre Bemba used an entire army as a weapon to rape, pillage and kill civilians the Central African Republic. Today he is brought to account for deliberately failing to prevent, repress or punish mass atrocities committed by his men in CAR”, stated the Prosecutor of the ICC, Luis Moreno-Ocampo, adding that “in the ICC era, this is the fate of military commanders who allow their troops to carry out such command tactics out of strategic considerations.“

“The victims deserve to receive justice and, especially, to participate in the judicial process”, affirmed Ms Arbia. The legal representatives of the victims highlighted the Court’s role in ending impunity and preventing the recurrence of atrocities. “Never again”, stated Ms Marie-Edith Douzima-Lawson, legal representative of the victims, while Mr Assingambi Zarambaud said that “no matter how long the night, the day is sure to come”. Ms Paolina Massidda, Principal Counsel of the Office of Public Counsel for Victims, which supports the teams representing the victims, stressed that what the victims want is to “break their silence and break the silence of the world on the terrible events they experienced”, which is a “first step towards establishing the truth and gaining access to justice”.

Last to take the floor was Mr Bemba’s Defence team, comprised of Mr Nkewbe Liriss, Mr Aimé Kilolo Musamba and Mr Nick Kaufman. It stated that “under Patassé’s presidency, the Central African State freely disposed of the Congolese troops of the MLC administration, who fought under its flag, and was accountable for their acts”.

Jean-Pierre Bemba Gombo is alleged to be criminally responsible for having effectively acted as a military commander within the meaning of article 28(a) of the Rome Statute for crimes against humanity (murder and rape) and war crimes (murder, rape and pillaging) allegedly committed in the territory of the Central African Republic during the period approximately between 26 October, 2002 and 15 March, 2003.