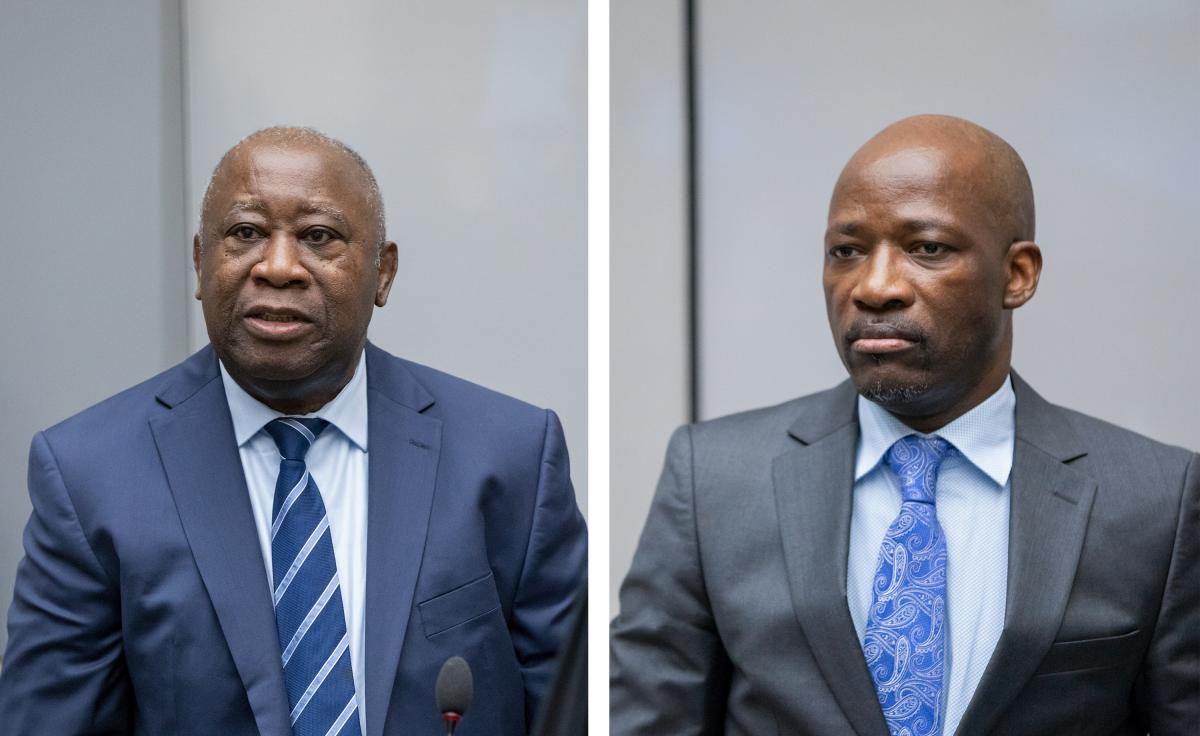 Mr Laurent Gbagbo and Mr Charles Blé Goudé in Courtroom I at the seat of the International Criminal Court in The Hague, Netherlands on 15 January 2019 ©ICC-CPI

Today, 15 January 2019, Trial Chamber I of the International Criminal Court ("ICC" or "Court"), by majority, Judge Herrera Carbuccia dissenting, acquitted Mr Laurent Gbagbo and Mr Charles Blé Goudé from all charges of crimes against humanity allegedly committed in Côte d'Ivoire in 2010 and 2011. A fully reasoned decision will be issued in writing in due course. The Prosecutor may appeal the decision after the full decision is filed.

As a consequence, the Chamber ordered the release of Mr Gbagbo and Mr Blé Goudé. The Prosecutor may request that Mr Gbagbo and/or Mr Blé Goudé remain in detention for exceptional reasons. Trial Chamber I will hear the parties and participants on this matter tomorrow 16 January 2019 at 10 hours.

Judges Cuno Tarfusser (presiding) and Geoffrey Henderson, forming the Majority of the Chamber, noted the violent political conflict in the context of the 2010 presidential elections, in Abidjan and in other parts of the country. The Majority, however, considered that the Prosecutor has failed to submit sufficient evidence to demonstrate the responsibility of Mr Gbagbo and Mr Blé Goudé for the incidents under the Chamber's scrutiny.

In particular, having thoroughly analysed the evidence, the Chamber concluded by majority that the Prosecutor has failed to demonstrate several core constitutive elements of the crimes as charged, including the existence of a "common plan" to keep Mr Gbagbo in power, which included the commission of crimes against civilians "pursuant to or in furtherance of a State or organisational policy"; and the existence of patterns of violence from which it could be inferred that there was a "policy to attack a civilian population".

Furthermore, the Chamber concluded, by majority, that the Prosecutor failed to demonstrate that public speeches by Mr Gbagbo or Mr Blé Goudé constituted ordering, soliciting or inducing the alleged crimes. The Chamber decided that, accordingly, there is no need for the defence to submit further evidence.

Audio-visual materials of the hearing:

Dissenting Opinion to the Chamber's Oral Decision of 15 January 2019

Background: The Prosecutor brought against Laurent Gbagbo and Charles Blé Goudé charges of crimes against humanity (murder, rape, other inhumane acts or – in the alternative – attempted murder, and persecution) allegedly committed in the context of post-electoral violence in Côte d'Ivoire between 16 December 2010 and 12 April 2011.

Since the beginning of the trial on 28 January 2016, 231 hearing days were dedicated to the presentation of the Prosecutor's evidence and 82 witnesses testified in court and through video link; thousands of documents were submitted into evidence, hundreds of motions, requests and decisions were filed. On 4 June 2018, the Chamber declared that that the presentation of the evidence of the Prosecutor was closed.