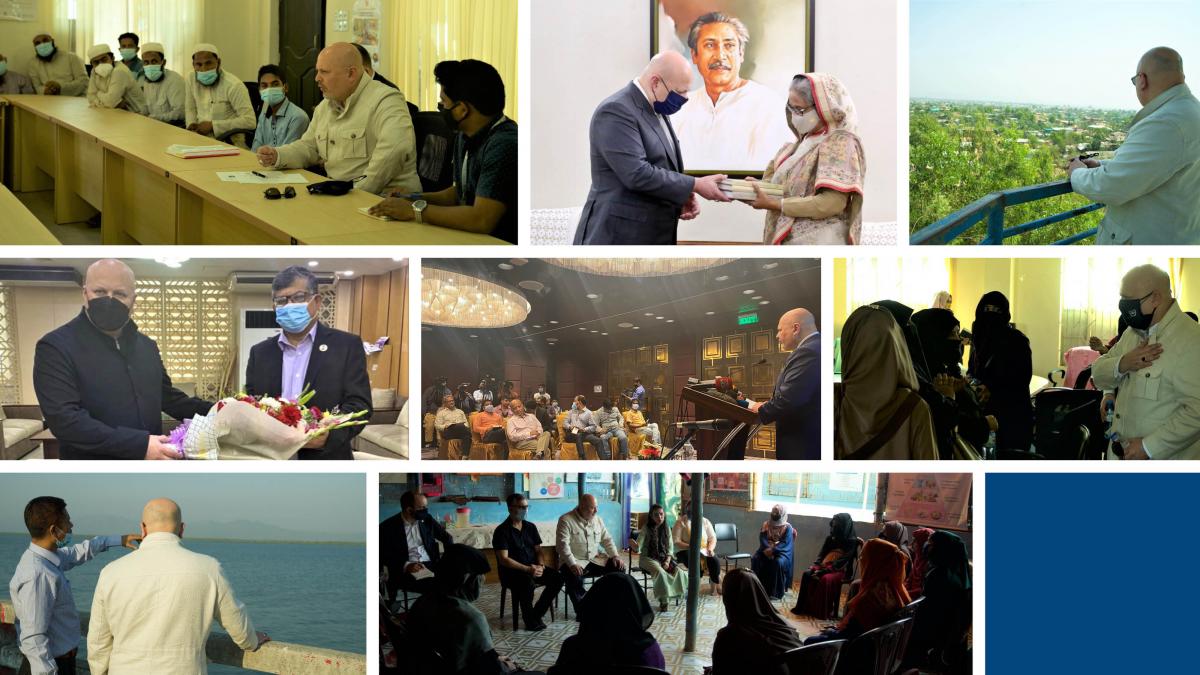 During the visit, Prosecutor Khan emphasised that the investigation being conducted by his Office into crimes within the Court's jurisdiction allegedly committed against the Rohingya from Myanmar would be a priority during his tenure. He confirmed to all stakeholders that he had allocated additional resources to the investigative team and was seeking to accelerate the collection and analysis of evidence, which had previously been impacted by the COVID-19 global pandemic.

Prosecutor Khan delivered this message directly to survivors and affected communities during his visit to Kutupalong refugee camp in Cox's Bazar, home to hundreds of thousands of members of the Rohingya community who have fled violence in Myanmar. In meetings with Rohingya women and youth activists, Prosecutor Khan discussed how his Office can further empower them to contribute to the investigation. During a meeting with local Imams and other religious leaders, the Prosecutor also addressed ways that Rohingya leaders can support victims of sexual and gender-based violence to come forward with their accounts in the context of the Office's ongoing investigations.

"We are here to work with you to build the foundations of justice. The road to accountability will not be simple, but it is a goal we can only achieve by working together, as a partnership between us", stated the Prosecutor.

In his meeting with the Prime Minister, the Prosecutor recognised the crucial role that Bangladesh had played in providing refuge to the Rohingya as they fled Myanmar in 2017. "That decision represented a moment of true empathy and courage. It also demonstrated the understanding among the Bangladeshi people of the impact of atrocity crimes, based on their own lived experience. This approach of courageous solidarity continues to be reflected in the assistance provided by Bangladesh to our work in pursuit of justice for the Rohingya community", stated the Prosecutor.

The Prosecutor expressed his sincere appreciation to the authorities of Bangladesh for facilitating his visit. He also expressed his gratitude to the non-governmental organisations and United Nations partners that had supported his direct engagement with survivors and affected communities in Cox's Bazar.

The Prosecutor held a press conference in Dhaka at the conclusion of his mission to Bangladesh, fielding questions from local and international media present. During the press conference, the Prosecutor announced his intention to undertake additional visits to Bangladesh in order to further support and advance the work of his Office in relation to this investigation.

The Prosecutor had the following message at the conclusion of his visit:

"I am profoundly grateful for the generosity and support shown to me by the Bangladeshi people and the Rohingya community during this visit. As I stated to survivors in Cox's Bazar: We are here to serve you and help deliver justice. I am leaving here confident that with the renewed focus of my Office on this investigation, combined with the strengthened partnerships we have developed with survivors and national actors, we can now enter a phase of accelerated action. It is my hope and expectation that this will ultimately lead to those that may be responsible for atrocity crimes committed against the Rohingya community being held accountable in accordance with the law."

In November 2019, ICC Judges granted the former Prosecutor Bensouda's request to open a full investigation into alleged crimes within the ICC's jurisdiction in the Situation in Bangladesh/Myanmar (read her statement following the Judges' authorisation to proceed with an investigationby clicking here).