Skip to main content
ICC Prosecutor, Fatou Bensouda, participates in the 72nd session of the UN General Assembly: “Backing the ICC is to support humanity’s progress towards a more just world”

ICC Prosecutor, Fatou Bensouda, participates in the 72nd session of the UN General Assembly: “Backing the ICC is to support humanity’s progress towards a more just world” 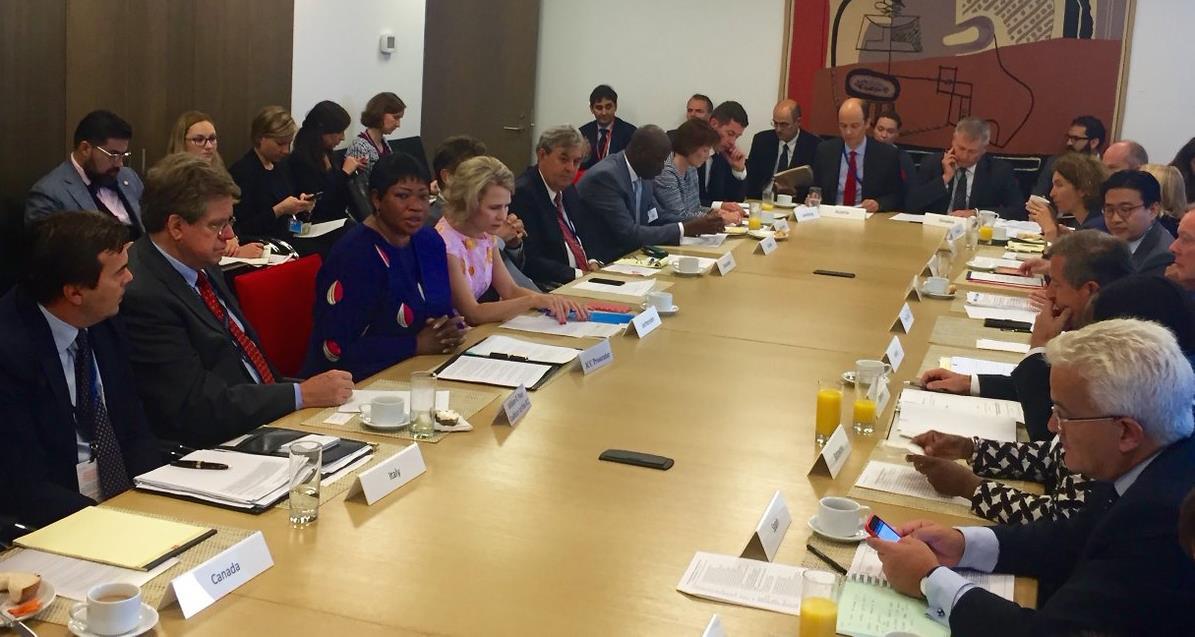 Last week, the Prosecutor of the International Criminal Court ("ICC" or "Court"), Mrs Fatou Bensouda, participated in the 72nd session of the United Nations General Assembly ("UNGA") held at the UN Headquarters in New York, United States.  With  over 190 Heads of State and Ministerial led delegations present, the Prosecutor's participation presented a unique, efficient and cost-effective opportunity to engage and advance the work of her Office, strengthen support and further mainstream the mandate of the ICC at this annual UN platform.

When close to two decades ago, 120 countries voted to adopt the Rome Statute – the Court's founding treaty – they did so recognising that atrocity crimes "threaten the peace, security and well-being in the world" and that these serious crimes of concern to the international community must not go unpunished.  "To this end, since its inception, the ICC has been undertaking its crucial independent and impartial mandate with the support and cooperation of its States Parties and full respect for the primacy of national jurisdictions.  My team and I participated at the 72nd session of the UNGA in that spirit – to highlight the work of my Office in investigating and prosecuting the most serious crimes and to build on the existing political and diplomatic support", Prosecutor Bensouda stated.

On Thursday, the 21st of September, the Prosecutor addressed the annual meeting of the Informal Ministerial Network for the ICC, comprising a network of over 30 Ministers of Foreign Affairs and Justice from around the world, an initiative of the Minister of Foreign Affairs of Liechtenstein, H.E. Ms Aurelia Frick.  At the event, hosted by the Permanent Missions of Liechtenstein and Switzerland to the UN, Prosecutor Bensouda expressed her appreciation for the chorus of statements in support of her Office and the Court, reaffirming her Office's "resolve to fight impunity for atrocity crimes."  She underscored that: "backing the ICC is to support humanity's progress towards a more just world."

On the same day, the Prosecutor participated in high level discussions on the "Responsibility to protect cultural heritage from terrorism and mass atrocities", convened by the Permanent Mission of Italy to the UN, the European Union, UNESCO, UNODC, and the Global Centre for the Responsibility to Protect.  The Prosecutor joined H.E. Ms Irina Bokova, Director-General of UNESCO; H.E. Ms Federica Mogherini, High Representative of the European Union for Foreign Affairs and Security Policy; H.E. Mr Angelino Alfano, Minister for Foreign Affairs and International Cooperation of Italy, among others, in condemning the deliberate destruction of cultural heritage and, call for action. The Prosecutor advocated for a multifaceted approach to confront this challenge, emphasising the importance of a judicial response to hold perpetrators accountable. In this context, she referenced the ICC case concerning Mr Al Mahdi. She also elaborated on her Office's ongoing policy work on the protection of cultural heritage within the framework of the Rome Statute.

The Office of the Prosecutor of the ICC conducts independent and impartial preliminary examinations, investigations and prosecution of the crimes of genocide, crimes against humanity and war crimes. The Office has been conducting investigations in: Uganda; the Democratic Republic of the Congo; Darfur, Sudan; the Central African Republic (two separate investigations); Kenya; Libya; Côte d'Ivoire, Mali and Georgia. The Office is also conducting preliminary examinations relating to the situations in Afghanistan; Burundi; the registered vessels of Comoros, Greece and Cambodia; Colombia; Gabon; Guinea; Iraq/UK; Palestine, Nigeria and Ukraine.