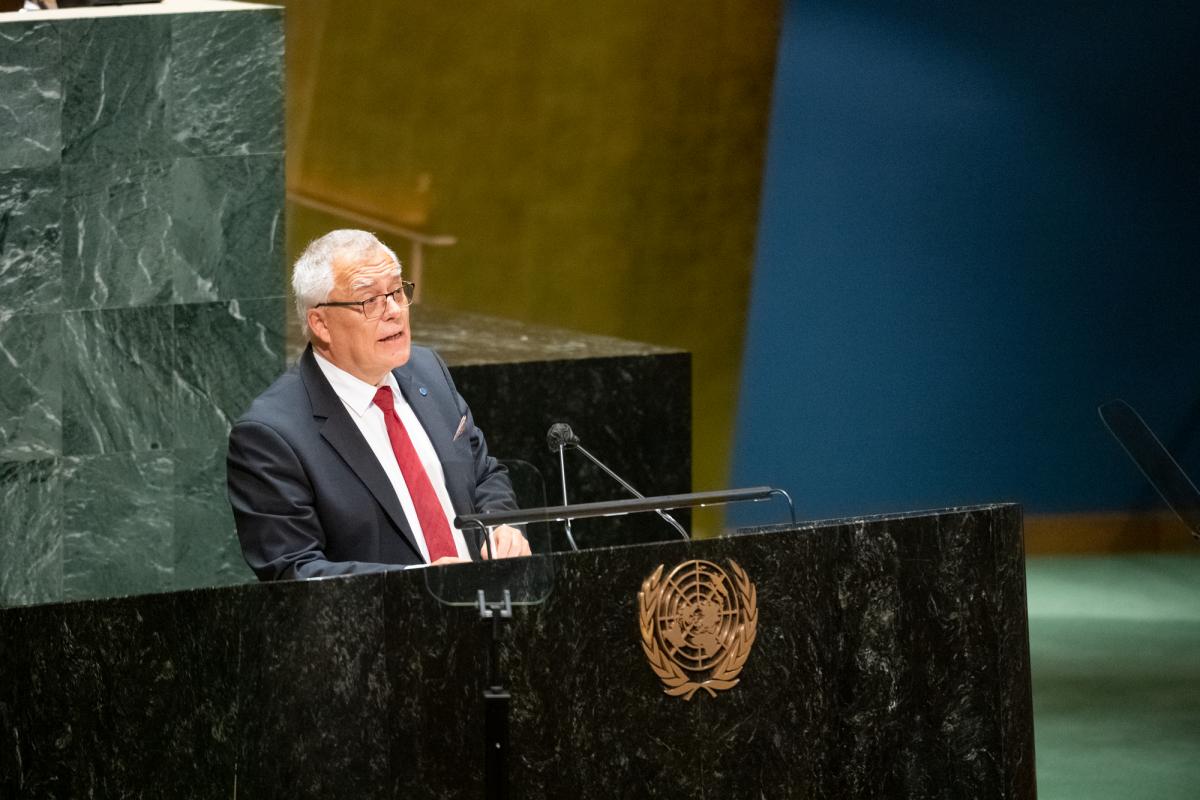 President Hofmański began his remarks by expressing the Court's gratitude to the UN for its "unwavering commitment" to the ICC as well as the wide-ranging assistance and cooperation provided on a reimbursable basis. Both organisations have a "close, unique relationship" and share the common values of "peace, security, rule of law and respect for human rights", the President recalled.

The President also underlined the Court's important role, as an "integral part of the international structure for upholding the rule of law", in achieving UN Sustainable Development Goal 16. "The ICC is a forward-looking institution, a structure of the rule of law built for the well-being of current and future generations", he added.

The ICC President urged all States that have not yet done so to join the Rome Statute: "With 123 States Parties, the ICC enjoys broad international support. But for the sake of future generations, for the sake of victims, and for the sake of our shared humanity, I hope to see that number rise further". "Empirical research shows that joining the Rome Statute adds to the deterrence of the gravest crimes under international law. This is not just about preventing atrocities at home; each new State Party also strengthens the system as a whole and gives more hope to victims everywhere in the world", he added. Concluding his address, the President said: "To any country that may have doubts about joining, I would like to say: 'let's talk'. I truly believe that many obstacles can be solved through dialogue".

While expressing the Court's appreciation for the cooperation received from numerous States and organisations in the last year, the President stressed that more than ten arrest warrants issued by the Court remain outstanding. He called on States Parties to the Rome Statute to consider ratifying the amendments adopted by the Assembly of States Parties, to join the Agreement on the Privileges and Immunities of the ICC, and to implement the Statute in their national legislation. The President also appealed to States to make donations to the ICC's Trust Fund for Victims (TFV) in order to support its reparative activities reaching hundreds of thousands of victims and their families.

The report presented by President Hofmański describes the progress made by the Court in 2020-2021 despite practical challenges caused by the COVID-19 pandemic, as it was seized of 16 open situations. Among notable developments: two Appeals judgment on the merits, a verdict and a sentence, and an order on reparations for victims, were issued; two trials commenced; charges were confirmed against two accused; the TFV dealt with the implementation of reparations stemming from several past cases; three new investigations were opened by the Prosecutor in the last year.

"The ICC is working at full speed, successfully discharging its mandate in the fight against impunity. The Court is active on multiple continents, addressing the most serious crimes under international law. Trials are taking place in our courtrooms day to day, week to week, month to month", said the President.