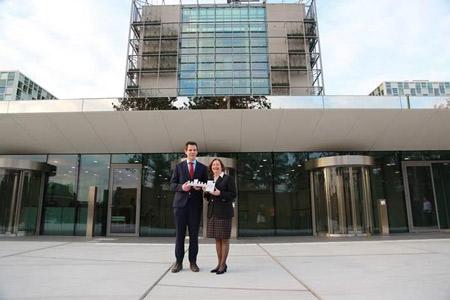 On 12 November 2015, the International Criminal Court (ICC) was formally handed-over its permanent premises during ceremony at the Court's new Premises in The Hague, Netherlands. ICC President Silvia Fernández de Gurmendi received a symbolic key from Mr Bart van Eijk, Project manager of Courtys, the consortium in charge of construction works, in the presence of the ICC Judges, the ICC Prosecutor and the ICC Registrar. The Court will move into its new home in December 2015.

"Completion of the new, purpose-built building of the Court is a major milestone for the ICC as a permanent international institution," said ICC President Silvia Fernández de Gurmendi at the ceremony. "I pledge our full commitment to making the most effective use of the new premises in order to achieve justice for victims and to contribute to the prevention of core international crimes."

As a permanent judicial institution, the ICC required functional permanent premises to enable the Court to fulfil its duties effectively and to reflect the increasing significance of the Court in the fight against impunity. In December 2007 the Assembly of States Parties decided that the ICC should be provided with newly built permanent premises. In 2010 the Danish firm schmidt hammer lassen was selected to design the new premises and in October 2012 Courtys, a consortium of the VolkerWessels subsidiaries Visser & Smit Bouw and Boele & van Eesteren, was chosen for their realization. Construction work started on 16 April 2013 and has now been completed.

"After 3 years of working together in a very productive, open and pleasant way, I am honoured to hand over the key of the Permanent Premises to the International Criminal Court" declared Mr Bart van Eijk, Project manager of Courtys. "We are proud to have helped build a home for the ICC, contributing to the Court's mission to ending impunity for the perpetrators of the most serious crimes. Courtys wishes all the best to the Court in this endeavour."

Located close to the North Sea, the Court's new premises are placed between nature and the city and set in the rolling dune landscape at the edge of The Hague. The building complex consists of six towers that are connected on the ground and first floors and offer over 1,200 workplaces. The tallest building is the 42-meters-high Court Tower accommodating three courtrooms and the Media Centre. The public area on the ground floor will welcome visitors to an exhibition centre, public galleries of the Courtrooms and a cafeteria. The Court will be located closer to the detention centre and will form part of the Hague International Zone, comprising a number of international organisations.

For more information about the new ICC premises, visit: http://www.icc-permanentpremises.org

For more information on realization of the project, visit: http://www.icc-permanentpremises.org/parties-involved