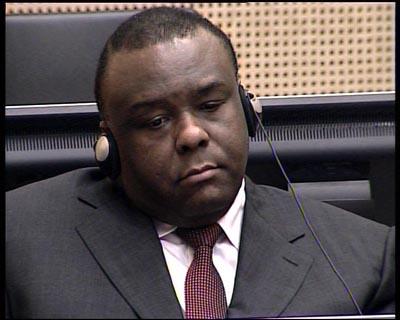 Today, Jean-Pierre Bemba, President and Commander in Chief of the Mouvement de libération du Congo (MLC), appeared for the first time before the judges of Pre-Trial Chamber III, in the presence of the Prosecution.

During this hearing, Pre-Trial Chamber III verified the identity of Jean-Pierre Bemba and ensured that he was clearly informed of the charges brought against him and of his rights under the Rome Statute, including the right to apply for interim release pending trial.

Jean-Pierre Bemba was represented by Aime Kilolo Musamba Lubemba, member of the Brussels and Lumumbashi Bars, and Tjarda Van Der Spoel, member of the Rotterdam (Dutch) Bar Association, appointed by the Registry of the Court, according to the wish expressed by the suspect to have these two counsels representing him during the initial appearance hearing.

The Chamber reminded the detainee of his right to appoint a Principal Counsel to represent him for the next stages of the proceedings.

The Duty Counsels raised issues related to the procedure of the arrest and transfer of Jean-Pierre Bemba to the Court. The Presiding Judge, Fatoumata Dembele Diarra, reminded those present of the aim of the initial appearance hearing, and invited the Defence to submit their written observations on the matter.