Skip to main content
Commemoration of the Rome Statute’s 20th anniversary in Kinshasa, Democratic Republic of the Congo

Commemoration of the Rome Statute’s 20th anniversary in Kinshasa, Democratic Republic of the Congo 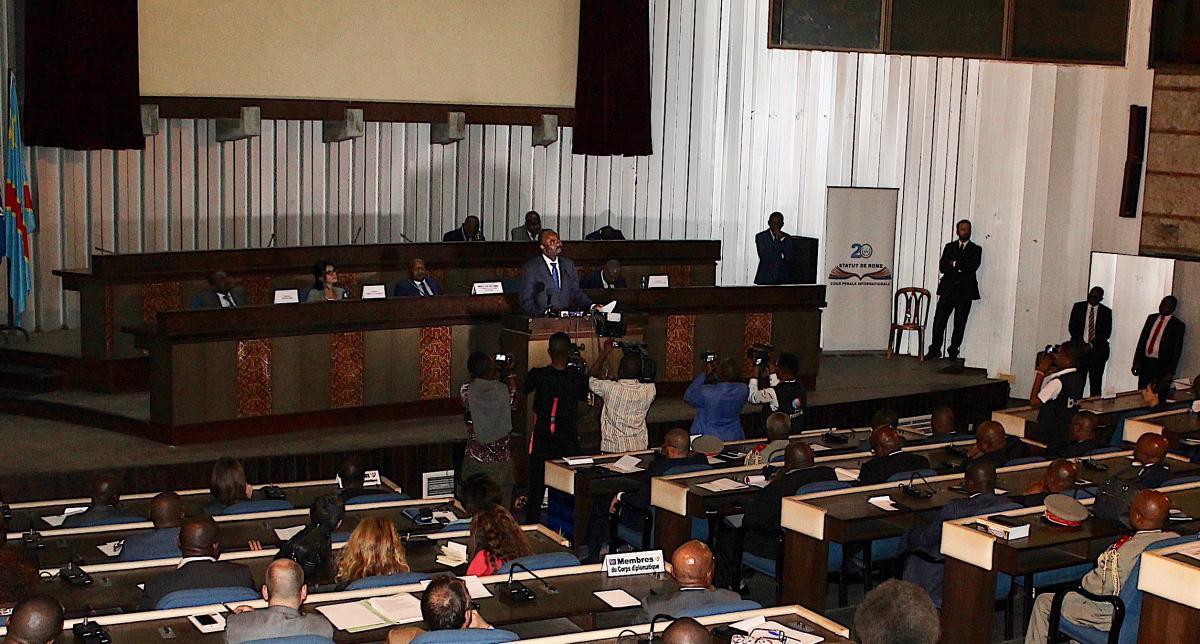 20th anniversary of the Rome Statute, in the international conference room of the DRC’s

In his opening speech, Deputy Minister of Foreign Affairs Agée Matembo Toto, representing the Deputy Prime Minister and Minister of Foreign Affairs and Regional Integration, reiterated the DRC's support for the ICC: "Beyond the strong judicial cooperation, my country actively and continuously participated in the various activities of the different organs of the International Criminal Court and is willing to do even more in the future as the Congolese people and its leaders firmly believe in achieving peacebuilding in all regions of the world and the ideal of humanity's well-being, in particular through this judicial mechanism which works towards protecting humanity from tyranny and all forms of cynicism causing serious and unspeakable crimes".

In his presentation on the "Cooperation between the ICC and the Democratic Republic of the Congo: situation and perspectives", Professor Luzolo Bambi Lessa, recounted the efforts made to implement the ICC's first activities in the DRC thanks to the expertise of Congolese lawyers, and concluded with a note of encouragement to the ICC: "The International Criminal Court is a capacity building tool for our justice. With its 20 years of existence, it still needs time to grow. Let us not forget that the impunity gap in the Democratic Republic of the Congo remains important, meaning that many victims are still waiting for Justice to reconcile the Congolese people. It is through justice that our country will experience real development".

Speaking about the "Application of the Rome Statute in Congolese law: situation and perspectives", Professor Baruani Saleh, Dean of the Law Faculty at the Protestant University in Congo, declared: "The principle which must now be highlighted with the advent of the ICC is that the community of nations has answered the cries of victims with the aim of bringing them justice. This can only be achieved thanks to the commitment of States to end impunity".

In his speech "20 years of the Rome Statute: situation and perspectives", ICC Judge Antoine Mindua Kesia-Mbe, guest of honour at the conference, expressed his hope for the future of the ICC. He urged non-States Parties to ratify the Rome Statute while emphasising that the ICC is a complementary jurisdiction. He also asked States Parties not to withdraw from the Statute and recommended them to voice their concerns within the Assembly of States Parties. Judge Mindua also reaffirmed that ICC Judges have the only obligation to interpret the law according to the Rome Statute and in order to do so they perform their duties with independence, impartiality and integrity.

Background: Adopted on 17 July 1998, the Rome Statute is the founding treaty of the ICC, supported by over 120 countries. The International Criminal Court is the first permanent international criminal court established to help end impunity for the perpetrators of the most serious crimes of concern to the international community, namely war crimes, crimes against humanity, genocide and the crime of aggression.

Webpage on the 20th anniversary