Skip to main content
Central African Republic: The CCCPI and ICC celebrate the Day of International Criminal Justice on 17 July 2010

Central African Republic: The CCCPI and ICC celebrate the Day of International Criminal Justice on 17 July 2010 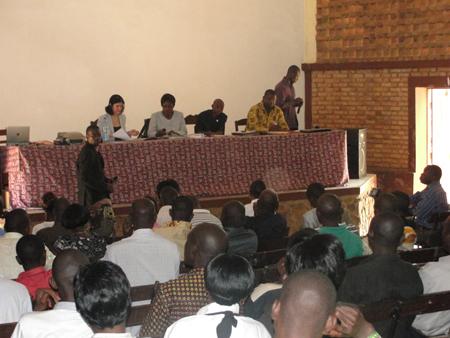 Twelve years (1998-2010) on from the adoption of the Rome Statute, the international treaty which established the International Criminal Court, the CCCPI and ICC decided to join together to celebrate this anniversary.

The Outreach Unit of the International Criminal Court then spoke about the Court, with particular emphasis on the provisions of the Rome Statute as adopted 12 years ago. The Unit also reflected on how far the Court had come since 1998 and on current situations and cases before this permanent, forward-looking judicial institution. The conference was also an opportunity for the outreach teams to discuss developments in the case of The Prosecutor v. Jean-Pierre Bemba Gombo, and to explain the reasons for the recent further postponement of the opening of the trial. The explanations were welcomed by participants.

Marie-Edith Douzima-Lawson (CCCPI Coordinator), Jean-Sébastien Mboutou (CCCPI General Secretary), Mathias Morouba (Vice-president of the Central African Human Rights Observatory) and Fabienne Chassagneux (Outreach Coordinator, the International Criminal Court) responded to the audience’s questions and concerns. On 19 July 2010, Bangui newspaper Le Quotidien reported that: “[TRANSLATION] The clarity and level of detail of the presentations were of the high standard expected of legal practitioners. Public opinion has been exasperated by the repeated postponement of the Jean-Pierre Bemba trial … Happily, the clarification provided (…) dispelled any fears that the ICC is subject to political manipulation. It is for journalists (…) to convey the legal reasons for these postponements to the public”.

Before the CCCPI brought the event to a close, participants strongly encouraged the speakers to repeat this initiative on the occasion of the next Day of International Criminal Justice, 17 July 2011.