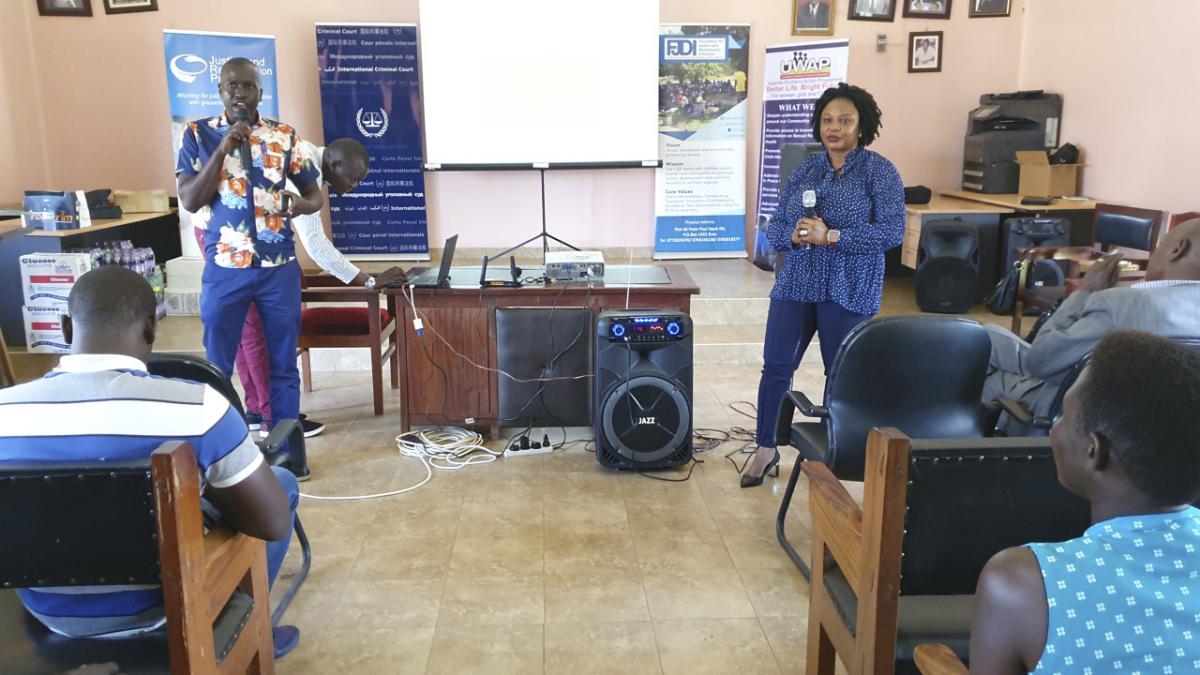 Ever since the confirmation of charges hearing in January 2016, live video screenings, especially in Gulu town, Northern Uganda, were the way to give the victims and affected communities a real-time experience, a front seat in the judicial proceedings in the Dominic Ongwen trial. The intention was no different on 10 March 2020, during the presentation of closing arguments in this case.  The trial started in 2016, on the charges of alleged crimes committed since 2002, during an armed conflict between the Lord’s Resistance Army and the national authorities.

The venue where the screening would take place was all set, waiting for the first visitors to arrive. As early as 8:30, hours before the actual screening, the first community members had already arrived at the venue. Mainly senior people, travelling long distances to witness the closing statements. The hall was getting fuller by the minute, with about 400 people seated: women, senior citizens, leaders, victims’ groups, disabled persons. 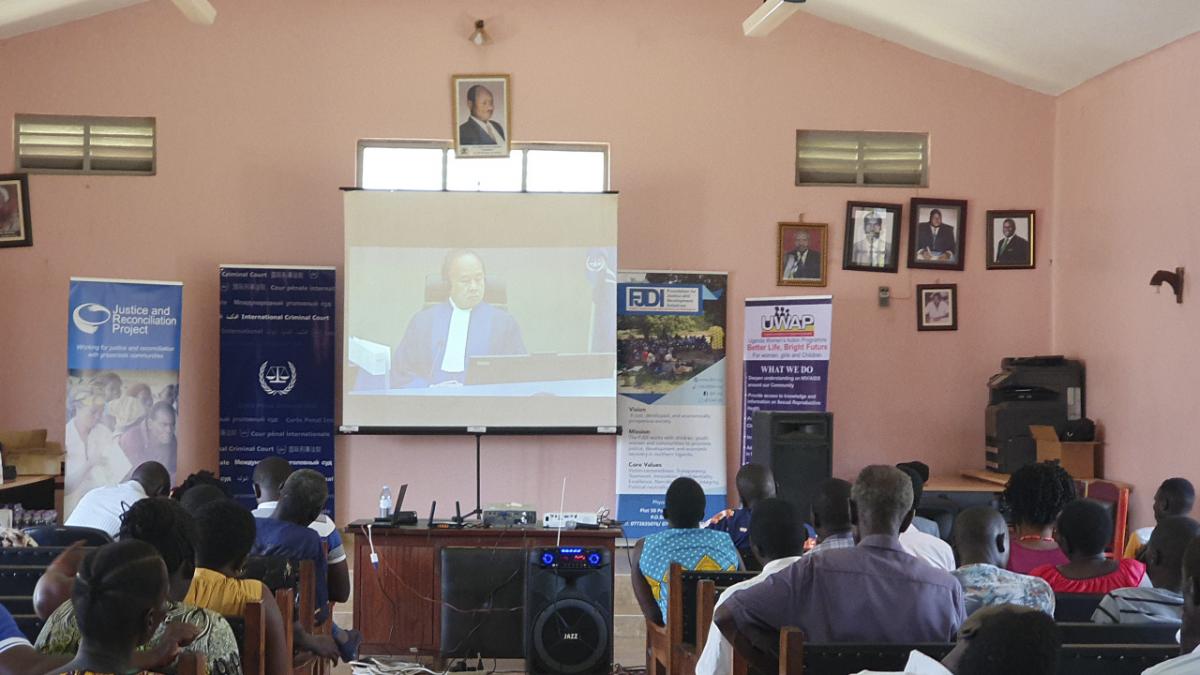 Our program kicked off at around 11:00, one hour before the screening, with the recap of the past stages of the trial, short questions and answers session and the explanation of what was to happen during the presentation of the closing arguments. It is always a delight to witness people’s deep understanding of the complex judicial process such as the one in the case of Dominic Ongwen. They know the charges, the case locations, even major arguments of the parties and participants. The knowledge shown is a testimony in a way, that “participation is empowerment”.

Exactly at noon, the wide projector screen, mounted in front of the “Court” in Gulu, beamed with live pictures. “Dano weng gu-aa malo” (the Acholi translation of “All rise!”), we hear.  As has become the practice during Outreach activities, all live broadcast of the proceedings have been done in Acholi, the language predominantly spoken by the victims and communities in northern Uganda.

A chilling silence from the “audience” followed, as the case was introduced and the presiding Judge handed the floor over to the prosecution, taking the rest of the day to close their case. The second to present their arguments were the victims’ legal counsels, while the third day was reserved for the defence. Amidst a quiet yet fully engaged community watching the proceedings, the 90 minutes long sessions, followed by half-hour breaks, quickly turned into Q&A sessions.

“Dano weng gu-aa malo!” busted from the speakers, again. To our shock and amazement, everybody in the screening hall in Gulu stood up in conformity. Absorbed in the proceedings, people watching the trial were experiencing the very atmosphere of the proceedings in the courtroom in The Hague. If what we desired was to bring to life the experience of the trial right from the courtroom to the victims and affected communities in Gulu, then this was a clear indication that we had outdone ourselves! 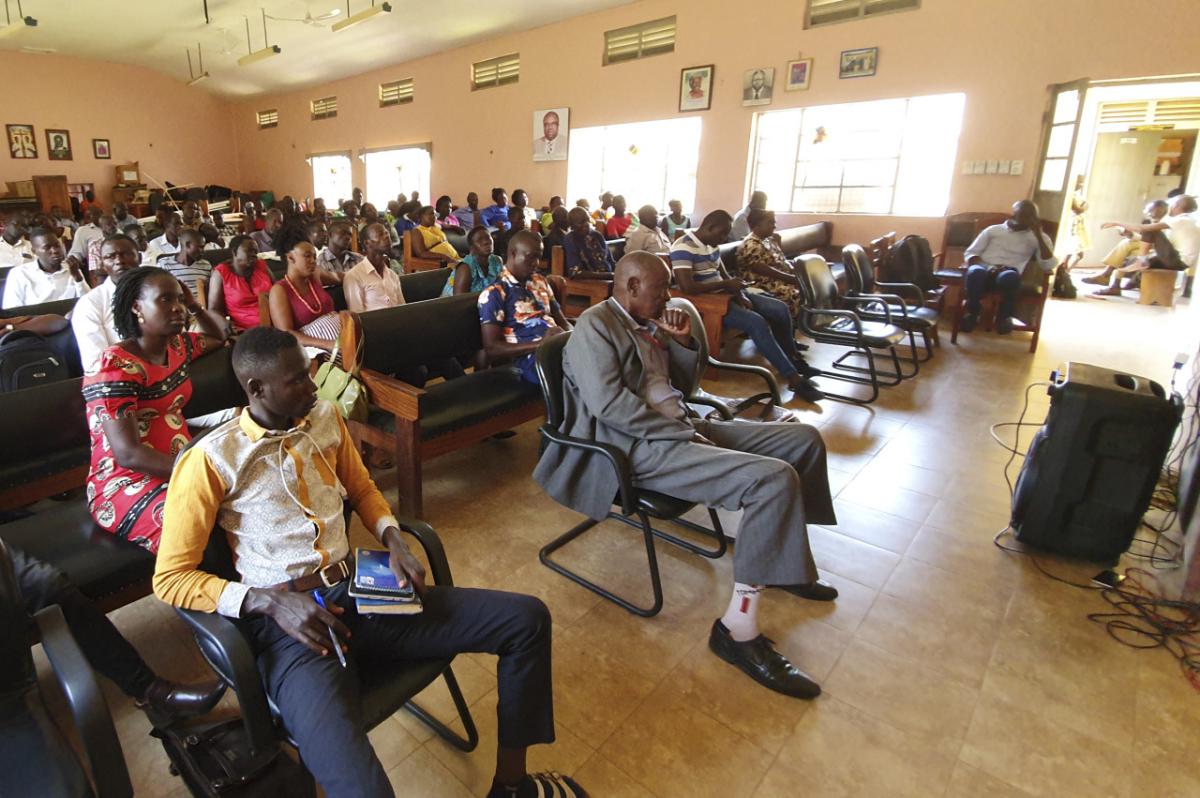 If you sense a pinch of satisfaction, or even a little pride in my tone, you are not mistaken. As an Outreach officer, I travelled a major part of the journey with the victims during this trial. I have heard their fears, frustrations and doubts. I have also seen their patience during the long process. To see the communities from Gulu rise as the court official announced “All rise”, is a seemingly simple, yet very strong demonstration of why we do what we do - to enable victims and affected communities to participate in the trial process. For three days, the courtroom moved from the seat of the Court in The Hague, to the District Council Hall in Gulu, with the victims and affected communities taking a front seat in the proceedings.

As we wait for the Judges to reach the verdict in the Dominic Ongwen case, I feel confident that the victims and communities across northern Uganda have been empowered, taking a meaningful part in the judicial process. I am honoured to be part of their journey.