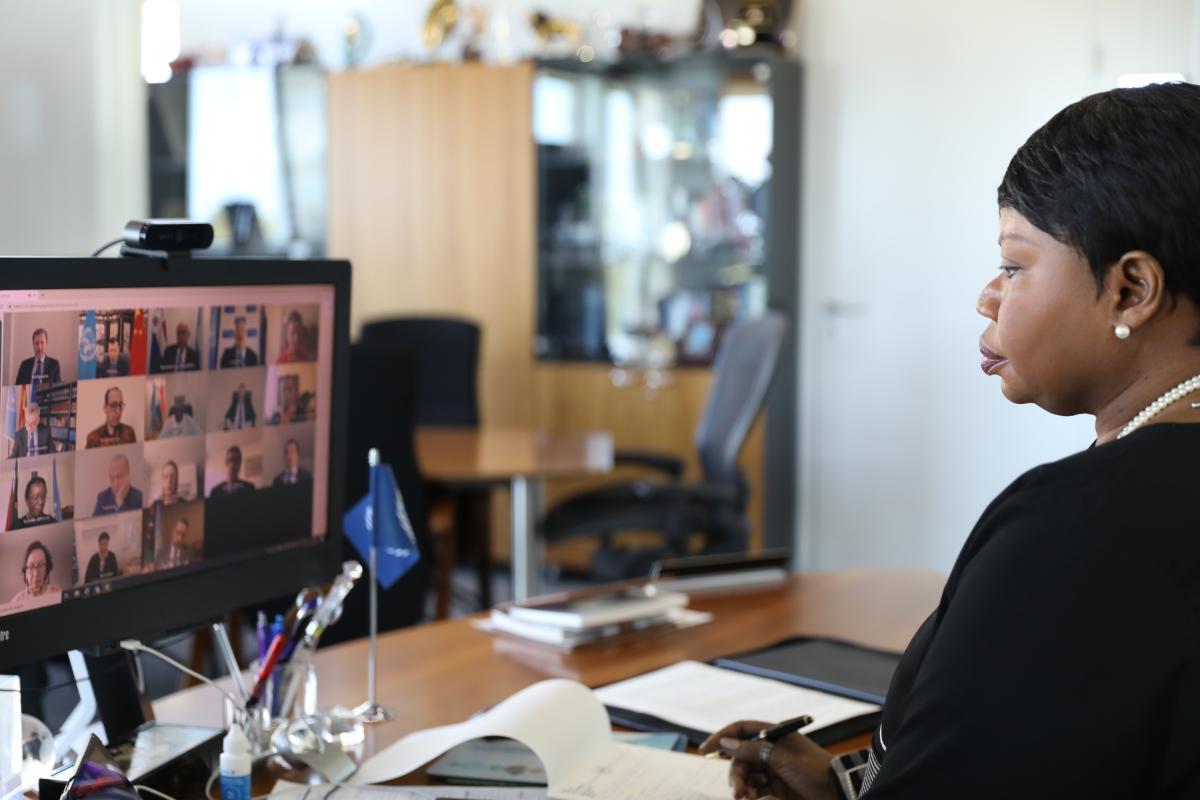 Due to COVID-19 lockdown at the UN headquarters, ICC Prosecutor, Fatou Bensouda, presents her Office’s 19th report on
the Situation in Libya remotely through VTC&#160;©ICC-CPI<br>

Given the exceptional circumstances in which we currently find ourselves due to the COVID-19 pandemic, I am pleased to appear before this Council via video conference to deliver my Office's nineteenth report on the situation in Libya, pursuant to Resolution 1970.

Allow me at the outset to also express my condolences to Council members and indeed all members of the United Nations family for the untimely deaths of their respective citizens caused by this global pandemic, and express our solidarity in the fight to contain the spread of the virus.

Relatedly, let me also emphasise that, despite some inevitable limitations caused by the COVID-19 pandemic, my Office's Libya team is forging ahead with its judicial work and investigations, managing to remain active and productive in these exceptional times. The Libya situation remains a priority for my Office, and I seize the opportunity in this forum to announce that my team is working on applications for new warrants of arrest.

This Council is well aware that, since my last report, serious violence related to the armed conflict in Libya, particularly in and around Tripoli, has regrettably not abated. It is now over a year since the offensive on Tripoli by the eastern-based militia known as the Libyan National Army, headed by General Khalifa Haftar, started. My Office continues to carefully monitor the unfolding events. Of particular concern to my Office are the high numbers of civilian casualties, largely reported to be resulting from airstrikes and shelling operations.

My team continues to gather and analyse information about incidents that have occurred during the recent period of armed conflict that may constitute crimes under the Rome Statute.

I reiterate that intentionally directing attacks against the civilian population, or against individual civilians not taking direct part in hostilities, is a war crime under the Rome Statute. Likewise, the Rome Statute prohibits the intentional directing of attacks against hospitals and other buildings protected under international law, such as those dedicated to religion or education, when they are not military objectives. Even where military targets are involved, the principle of proportionality applies.

I have previously also highlighted to your attention the issue of arbitrary detention and serious mistreatment of migrants and refugees attempting to transit through Libya.

This is a grave and persistent problem, and my Office continues to dedicate resources to investigating this matter. In particular, important progress has been achieved through the adoption of a cooperation strategy by my Office, which focusses on the exchange of evidence and information with relevant States and organisations. This activity is conducted with a view to seize synergies and support investigations and prosecutions in domestic jurisdictions. These efforts, I am pleased to report, are producing helpful results.

It is worth stressing that the issue of arbitrary detention and serious mistreatment of detainees affects not only migrants and refugees, but also thousands of other people detained in prisons and detention centres across Libya.

Latest figures indicate that the detention of persons without due process is widespread. Many people are being detained without lawful basis or denied their fundamental procedural rights.

Persons detained without the proper protection of the law are at greater risk of serious forms of mistreatment, including murder, torture, rape and other forms of sexual violence.

Information obtained by my Office indicates that such crimes are all too common. Former detainees report brutal methods of torture. Detention-related victims of rape and other forms of sexual violence include men, women and children. Detainees have died from injuries sustained through torture, and from the failure to provide proper and timely medical care.

My Office is aware of allegations of serious violations in many prisons and detention facilities throughout Libya. Of particular note are Al-Kuweifiya and Gernada Prisons located in eastern Libya. These allegations also extend to Mitiga Prison in Tripoli, which is controlled by an armed group known as the Special Deterrence Force. This group officially falls under the authority of the Ministry of Interior of the Government of National Accord.

Serious and urgent reforms in many Libyan prisons and detention facilities appear necessary to prevent future crimes. Accountability for alleged past violations is equally important. Primary responsibility for investigating and prosecuting these alleged crimes rests on Libya. My Office continues to closely follow-up on these allegations. 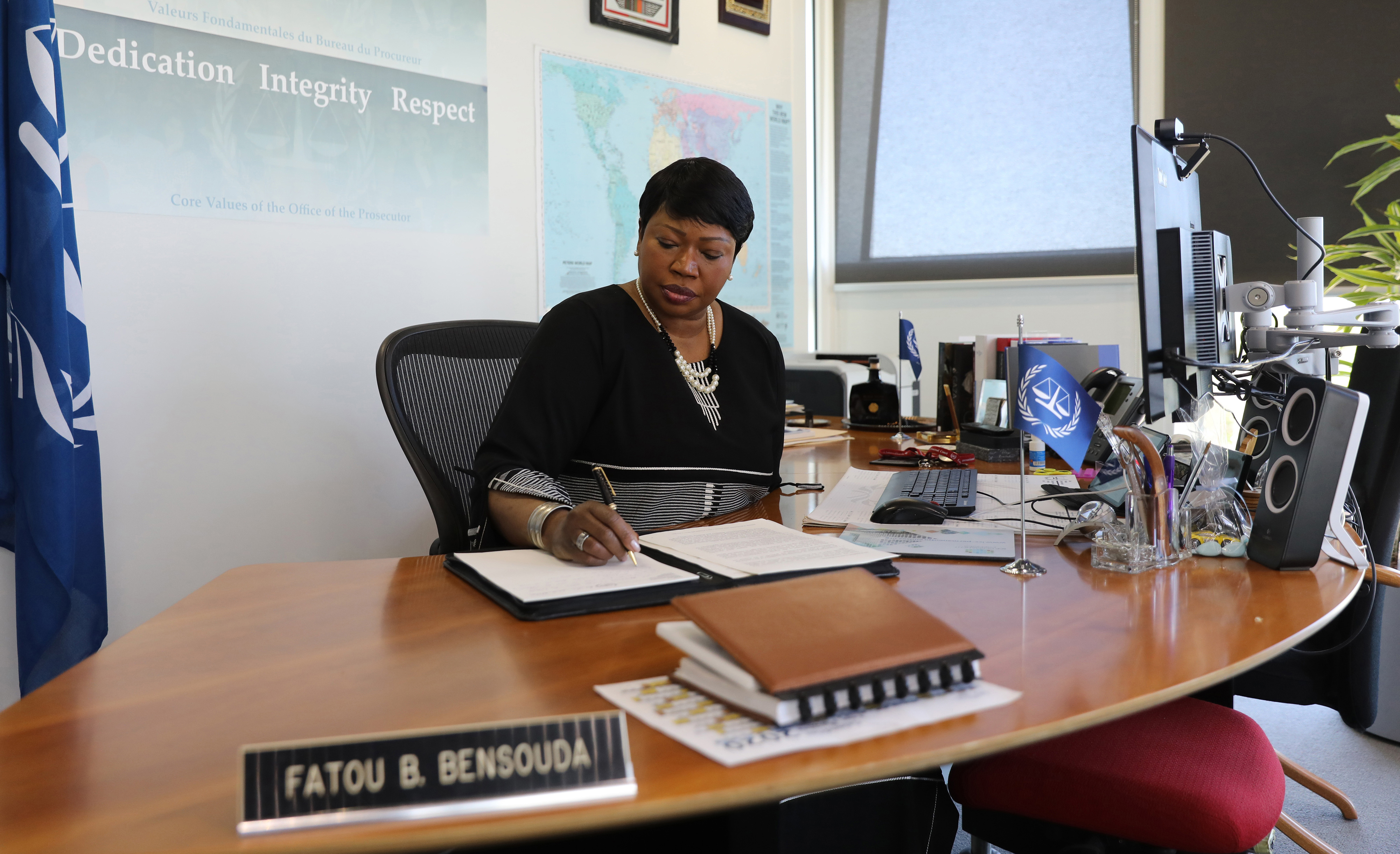 Reports received by my Office also indicate increasing numbers of cases of enforced disappearance, committed with close to total impunity.

The crime against humanity of enforced disappearance entails the refusal to provide information on the fate or whereabouts of persons who have been arrested and detained by a State or political organisation, or with its authorisation, support or acquiescence.

The crime of enforced disappearance inflicts severe suffering on the family of the missing person. It can also spread terror within a society. When targeted against prominent members of the community, such as political activists, human rights defenders and journalists, it sends a strong message that voices of dissent will not be tolerated.

For these reasons, and others, the crime of enforced disappearance has grave consequences for both individuals and communities.

Emblematic of this disturbing trend is the case of Ms Siham Sergewa, a member of the Libyan House of Representatives. Ms Sergewa has been missing since 17 July 2019 when armed men allegedly kidnapped her from her home in Benghazi. Her fate and whereabouts remain unknown.

Recent information obtained by my Office may point to those responsible for Ms Sergewa's disappearance. Investigations to verify this information are continuing.

Hate speech in Libya also appears to be on the rise. Derogatory and dehumanising language targeted at certain individuals or groups of people is now pervasive in both traditional and social media.

This is cause for concern. This type of language generates both hatred and fear in the community, and deepens divisions within society. It sows the seeds for crimes against targeted groups and individuals, and foments conditions in which mass atrocity crimes can occur.

Under the Rome Statute, a person who instigates the commission of crimes by others is also responsible for those crimes. Such instigation can include the making of public statements inciting attacks on specific ethnic or social groups.

Leaders and prominent members of the community have a special responsibility to lead by example and to refrain from hate speech. Anyone who incites fear, hatred and division in the community causes harm not only to those targeted, but also to the society as a whole.

I turn now to the case of Mr Saif Al-Islam Gaddafi. The second round of litigation in relation to the admissibility of Mr Gaddafi's case has now concluded. On 9 March 2020, the Appeals Chamber unanimously ruled that Mr Gaddafi's case is admissible before the International Criminal Court.

Accordingly, the arrest warrant for Mr Gaddafi remains enforceable. Libya continues to be under an obligation to arrest and surrender Mr Gaddafi to the Court.

In its judgment, the Appeals Chamber found that the International Criminal Court is barred from trying someone who has already been tried in a national jurisdiction with respect to the same conduct only if the proceedings in the other court are final.

The Libyan domestic proceedings against Mr Gaddafi are not final. Given that he was convicted in absentia, if Mr Gaddafi surrenders himself or is arrested, Libyan law provides that he must be retried. If sentenced to death for a second time, review by the Libyan Court of Cassation would be mandatory. Furthermore, the Libyan amnesty law, Law No. 6 of 2015, does not apply to his case.

In the course of the admissibility proceedings, Mr Gaddafi stated that he was released from detention on or about 12 April 2016. He has made no effort to surrender himself. Mr Gaddafi is a wilful fugitive, actively evading justice both in Libya and before the International Criminal Court.

Neither case can progress, nor can the victims of Mr Gaddafi's alleged crimes receive justice, whilst he remains at large.

The Appeals Chamber's judgment provides valuable guidance on some important points of international criminal law. Notably, Judge Ibáñez Carranza, in her Separate and Concurring Opinion, found that amnesties or similar measures that prevent the investigation, prosecution, and punishment of international core crimes that amount to grave human rights violations and grave breaches of international humanitarian law are incompatible with international law.

Accordingly, Judge Ibáñez Carranza found that such measures appear to be contrary to the object and purpose of the Rome Statute, although this issue must ultimately be determined on a case-by-case basis.

This is a significant legal development with respect to the obligation of States to investigate, prosecute and, if appropriate, punish perpetrators of mass atrocities.

Allow me to also recall that the arrest warrants for Mr Al-Tuhamy Khaled and Mr Mahmoud Al-Werfalli are yet to be executed. The Arab Republic of Egypt, where Mr Al-Tuhamy is believed to reside, has not arrested and surrendered him to the Court.

General Khalifa Haftar's Libyan National Army has neither facilitated the arrest and surrender of Mr Al-Werfalli to the ICC nor ensured his genuine investigation and prosecution in Libya. Mr Al-Werfalli is reported to be under the command of General Haftar.

While my Office continues to meet its obligations under the Rome Statute by advancing its investigations despite resource constraints and a challenging operational environment, the course of justice cannot make further progress without the arrest and surrender of ICC suspects. This is a responsibility that neither rests on my Office nor the Court, but other actors in the Rome Statute system, namely States.

As I have repeatedly stated before this august body, the Council and its members also have a special responsibility to support and urge cooperation with the Court pursuant to the resolution that referred this situation to my Office back in 2011.

I would be remiss if at the same time I do not acknowledge the excellent cooperation my Office continues to receive in support of our investigations from numerous States and stakeholders, and in particular from the Government of National Accord and the Libyan Prosecutor-General's office.

Nonetheless, on the most crucial cooperation matter – the arrest and surrender of ICC fugitives – the Libyan people's calls for justice remain unheeded. It is my sincere hope that this state of impunity will not remain the status quo and that the victims of Rome Statute crimes committed in Libya will have justice.

Justice for such crimes, including those I have elaborated upon today, is crucial to the rule of law and stability in Libya. Where appropriate, accountability for such crimes must extend to those in positions of authority.

I take this opportunity to once again stress that military commanders may be held responsible for crimes committed by forces under their effective command and control. Military commanders have a responsibility both to prevent or repress the commission of crimes by their forces, and to submit any such crimes for investigation and prosecution.

In conclusion, international criminal justice is a necessary force of accountability and deterrence – these are pillars upon which stability, progress and prosperity can be built and thrive. I call on this Council, the Court's States Parties and the international community more broadly, to stand firmly by the ICC and its crucial mandate to end impunity for the world's gravest crimes.

I thank you, Mr President, Your Excellencies, for your attention.| OTP

Nineteenth report of the Prosecutor of the International Criminal Court to the United Nations Security Council pursuant to UNSCR 1970 (2011):
English ; French ; Arabic