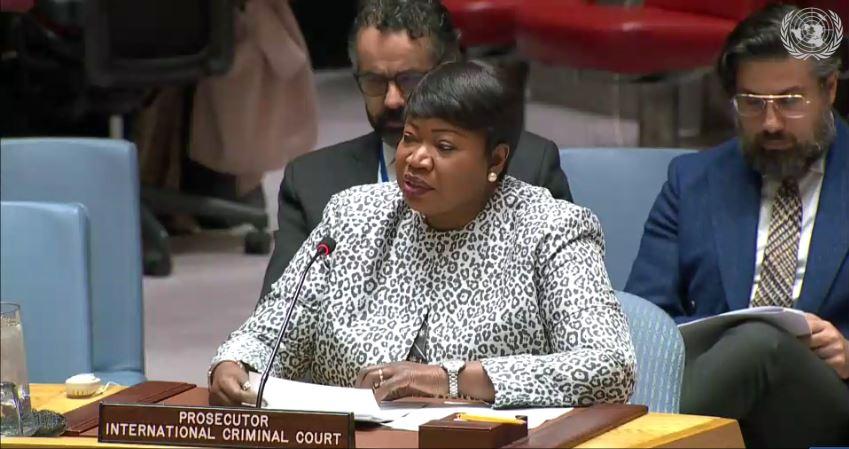 I welcome the opportunity to engage with this Council once again as I present my Office's eighteenth report on the situation in Libya pursuant to Resolution 1970, adopted in 2011. Before I begin, I would like to congratulate the United Kingdom on assuming the Presidency of the Security Council for the month of November and wish the Presidency and the Council success in the important work before you.

At the outset, I must observe with serious concern that there has been an escalation of violence in Libya over the reporting period. Reports indicate that there have been a high number of civilian deaths, thousands of persons internally displaced, and a sharp increase in abductions, disappearances and arbitrary arrests across Libya.

As recently highlighted by the Special Representative of the Secretary-General of the United Nations, Mr Ghassan Salamé, without the unequivocal support of this Council and the broader international community for an immediate end to the Libyan conflict, Libya will be at risk of being embroiled in persistent and protracted conflict and continued fratricide. The implosion of Libya must carry a heavy burden on the conscience of the international community and galvanize meaningful action to assist the Libyan authorities to bring stability to the country, and an end to the cycle of violence, atrocities and impunity.

Impunity serves both as an obstacle and a threat to stability and must be checked through the force of law. My Office continues to strive to do its part to ensure justice for victims and to hold accountable those alleged to be responsible for committing Rome Statute crimes in Libya. I am pleased to inform you that my Office has made further progress in its existing investigations and is continuing to work on applications for new warrants of arrest.

Regarding recent developments in the case against the suspect, Mr Saif Al-Islam Gaddafi, the Council will recall that Mr Gaddafi's challenge to the admissibility of his case was rejected earlier this year. Mr Gaddafi has filed an appeal against this decision. The Appeals Chamber recently ordered that a hearing be scheduled before it from 11 to 12 November 2019 to hear submissions and observations in Mr Gaddafi's appeal.

Let me stress that irrespective of the current admissibility proceedings, Libya remains under an obligation to arrest and surrender Mr Gaddafi to the Court.

The failure to execute warrants of arrest is not limited to Mr Gaddafi's case. The ICC arrest warrant against Mr Al-Tuhamy Mohamed Khaled has remained outstanding for more than six years. Furthermore, the two arrest warrants against Mr Mahmoud Mustafa Busayf Al-Werfalli remain unexecuted more than two years since the first warrant was issued.

The three ICC fugitives stand accused of grave international crimes. These crimes include the war crimes of murder, torture, cruel treatment and outrages upon personal dignity, and the crimes against humanity of persecution, imprisonment, torture, and other inhumane acts.

My Office has reliable information on the current whereabouts of all three suspects. Yet, Mr Gaddafi, Mr Al-Tuhamy and Mr Al-Werfalli remain at large, and justice still eludes the victims of their alleged crimes.

First, Mr Gaddafi is believed to be in Zintan, Libya.

Second, when the warrant for Mr Al-Tuhamy's arrest was issued, he was believed to be residing in Cairo, Egypt. This was reflected in the arrest warrant itself, which was unsealed on 24 April 2017. The information currently available to my Office indicates that Mr Al-Tuhamy still resides in Cairo.

Third, Mr Al-Werfalli – a suspect we allege is individually criminally responsible for war crimes under the Rome Statute – continues to enjoy his liberty in the Benghazi area. Furthermore, credible reports investigated by my Office indicate that the General Command of the Libyan National Army recently promoted Mr Al-Werfalli on the 8th of July from Major to Lieutenant Colonel. This promotion sends a clear message that General Khalifa Haftar, commander of the LNA, has no intention to genuinely prosecute Mr Al-Werfalli for the crimes alleged in the ICC arrest warrants.

On the contrary, it seems that Mr Al-Werfalli continues to be rewarded for his behaviour. In this respect, I note that this is the second time that the General Command of the LNA has promoted Mr Al-Werfalli. The first promotion took place on 25 May 2017, after the videos depicting the first four unlawful executions allegedly perpetrated by Mr Al-Werfalli had already been posted online.

During the reporting period, my Office has also continued to investigate allegations against other perpetrators with a view to potential applications for additional warrants of arrest.

The effective power to arrest and surrender ICC suspects rests solely with States. However, my Office is working to increase opportunities for outstanding arrest warrants to be executed. To this end, my Office, in line with its strategic goals, is developing, in coordination with States, enhanced strategies and methodologies to track and arrest suspects.

In accordance with UN Security Council Resolution 1970, I urge all States, including Libya and Egypt, to facilitate the immediate arrest and surrender of the Libyan fugitives to the Court.

The situation in Libya continues to be grave. I am deeply alarmed by reports indicating that, since early April 2019, more than 100 civilians have been killed, 300 injured, and 120,000 displaced as a result of the armed conflict.

As detailed in my report, there have been several events of particular concern over the past six months. I strongly condemn the car bomb attack in Benghazi on 10 August that killed five people, including three United Nations staff members, and injured multiple other civilians.

I also note reports of the indiscriminate shelling of Mitiga airport in Tripoli, and the multiple attacks against health workers and medical facilities. On 2 July 2019, airstrikes on Tajoura migrant detention centre, east of Tripoli, reportedly killed 53 people and injured 130. In addition, there have been reports of an alleged summary execution of LNA-affiliated fighters and some civilians at Gharyan hospital. My Office is also following events in southern Libya, where violent clashes and airstrikes in Murzuq have reportedly claimed many lives.

I condemn all unlawful violence in Libya resulting in the loss of life and injury. My Office remains seized of the situation in Libya, and if the actions of any party amount to war crimes or crimes against humanity, and all the required elements of the Rome Statute are satisfied, they may be liable to prosecution. Let me be clear: I will not hesitate to bring new applications for warrants of arrest against those most responsible for alleged crimes that fall under the jurisdiction of the ICC.

As regards alleged crimes committed against migrants in Libya, this Council will recall that my Office has adopted a two-pronged approach aimed at closing the impunity gap. My team continues to collect and analyse documentary, digital and testimonial evidence relating to alleged crimes committed in detention centres. We are assessing the viability of bringing cases before the ICC in relation to migrant-related crimes in Libya based on this evidence-driven process.

It is worth recalling that the ICC is a court of last resort in accordance with the principle of complementarity. It only acts when States do not genuinely investigate and prosecute serious international crimes or are unable to do so.

Consistent with this principle, my Office is concentrating its efforts on positive complementarity. Pursuant to Strategic Goal 6 of my Office's Strategic Plan, my team is actively assisting States that are investigating and prosecuting individuals who have allegedly committed crimes against migrants in Libya.

My Office's collaborative efforts with national law enforcement authorities have helped identify which of the judicial actors are best placed to investigate and prosecute migrant-related crimes in Libya.

I am pleased to inform you that this cooperation strategy has borne fruit. My Office has provided key evidence and information to national authorities, which has facilitated progress in a number of investigations and prosecutions relating to crimes against migrants in Libya.

I would be remiss not to recognise the ongoing cooperation of the Libyan Prosecutor-General's office. I commend the Libyan authorities for their continued commitment to implementing the November 2013 Memorandum of Understanding concluded between the Government of Libya and my Office.

I also greatly appreciate the support offered by many States including Italy, The Netherlands, Tunisia, the United Kingdom, Lithuania, Ireland, Spain and France.

I note the extension of the mandate of the United Nations Support Mission in Libya and I look forward to our continued valuable collaboration.

Perpetrators of serious international crimes are emboldened when they believe they will never face justice. The cycle of impunity has provided a breeding ground for atrocities in Libya. To break this cycle requires a concerted international effort to ensure accountability for atrocity crimes. Through the arrest and surrender of the ICC fugitives, the international community can begin to bring justice to the victims in Libya and help prevent future crimes and victimisation.

I reiterate my call on General Haftar, and those working with him, to facilitate the arrest and surrender of Mr Al-Werfalli to the ICC without further delay so that he can answer for his crimes in a court of law and for the truth to be established.

I call on all States to do everything in their power to ensure the surrender of all three ICC Libya fugitives to the Court.

I also call on all parties to immediately cease all indiscriminate attacks and to comply with their duties under international humanitarian law.

Libya will continue to be a priority situation for my Office in 2020. I remain committed to fulfilling my mandate with the aim of holding to account those responsible for the most serious crimes of international concern. This Council, as well as States Parties and non-States Parties, is once again urged to provide full support to the ICC to achieve its mandate in Libya, and to break the cycle of impunity.

We will soon be reaching a decade since this Council referred the situation in Libya to my Office. The people of Libya deserve peace and stability. Bringing those responsible for war crimes and crimes against humanity to justice facilitates that coveted outcome.

I thank you, Madame President, Your Excellencies, for your attention.