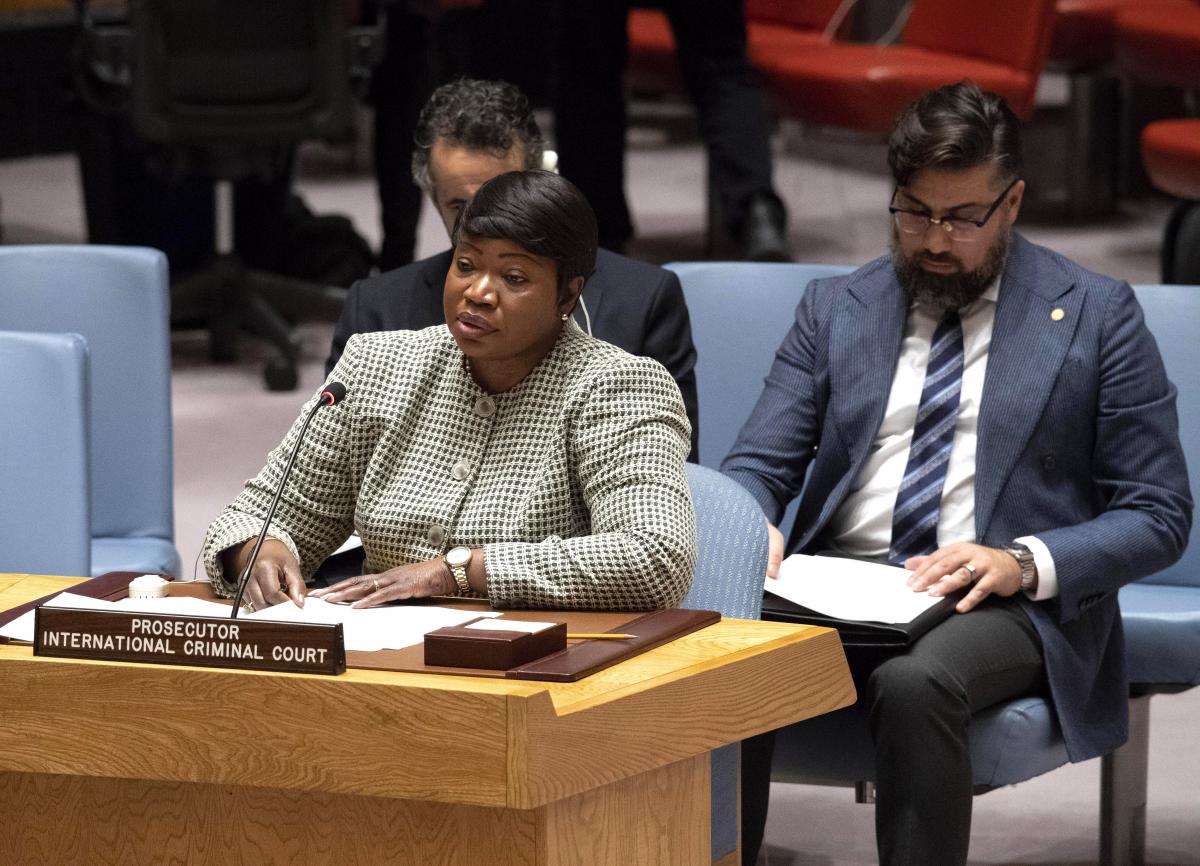 1. At the outset, I would like to congratulate the People's Republic of China on assuming the presidency of the Security Council for the month of November. I wish you every success in steering the essential work conducted by this august Council.

2. I welcome the opportunity to engage with this Council once again in relation to the Libya situation, and to provide updates regarding on-going cases and investigations, outstanding warrants of arrest, and cooperation with States, the organs of the United Nations and other organisations.

3. As this Council will recall, in June 2011, the Pre-Trial Chamber of the International Criminal Court issued the first warrants of arrest in the situation in Libya. Over seven years later, Libya remains a high priority situation for my Office. Three additional ICC warrants of arrest have been issued following applications brought by my Office during this period, and my team continues to make significant progress in investigations related to other alleged crimes in Libya.

4. Since my last report, we have also piloted new models of cooperation with interested States and organisations in relation to alleged crimes committed against migrants transiting through Libya. My Office hopes to replicate these models for cooperation in other situations before the Court and thereby further contribute to the fight against impunity.

5. I now turn to recent developments in the case against Mr Saif Al-Islam Gaddafi. As this Council is aware, in June of 2011, the Pre-Trial Chamber of the Court issued a warrant of arrest against Mr Gaddafi for the crimes against humanity of murder and persecution. This warrant of arrest was issued in relation to Mr Gaddafi's contribution, as de facto Prime Minister of Libya, to a common plan to deter and quell, by any means, the demonstrations against the rule of Muammar Gaddafi in 2011.

6. On the 5th of June this year, Mr Gaddafi filed an admissibility challenge submitting that his case is inadmissible before the ICC.

7. Significantly, in his challenge, Mr Gaddafi states that on or around the 12th of April 2016, he was released from custody of the Abu-Bakr al-Siddiq Battalion in Zintan, pursuant to an amnesty law.

8. Mr Gaddafi also argues that as a consequence of the domestic proceedings conducted against him in Libya he cannot be tried at the ICC.

9. For the reasons set out in my written response to this admissibility challenge, filed on the 28th of September 2018, I argued that Mr Gaddafi's case remains admissible before the Court. My sixteenth report, transmitted to the Council two weeks ago, briefly outlines my submissions.

10. My Office maintains that Mr Gaddafi must be arrested and surrendered to the Court.

11. This admissibility challenge is now sub judice and the Pre-Trial Chamber will render a decision in due course. I will therefore not delve any deeper into the factual and legal arguments in relation to this specific matter.

12. Turning to our on-going investigations, my Office continues to make considerable progress in the Libya situation.

13. We continue to monitor criminal conduct carried out by members of armed groups in Libya whose alleged criminal acts could fall within the jurisdiction of the Court. Armed groups use violence to exert control over State institutions, commit serious human rights violations, and abuse and exploit detainees in unregulated prisons and places of detention throughout the country.

14. These armed groups represent a major threat to long-term peace and stability in Libya. We do not confine our investigations to any one group; we look at alleged Rome Statute crimes committed by actors across the territory of Libya.

15. More information regarding the nature of these investigations cannot be divulged at the present, due to the confidential nature of investigations.  Based on the progress made, my Office hopes to be in a position to apply for new arrest warrants in connection with the Libya situation.

16. I also remain focused on the alleged Rome Statute crimes committed against migrants transiting through Libya. The journeys these people embark upon can quickly turn into true nightmare scenarios where they become victims of the darkest sides of human nature; where they are preyed upon mercilessly, and their vulnerabilities exploited with no regard for decency or the rule of law. My Office continues to receive evidence of serious crimes committed against migrants in Libya.

17. These alleged crimes include killings, sexual violence, torture and enslavement. In line with my June 2014 Policy Paper on Sexual and Gender-Based Crimes, my Office integrates a gender perspective and analysis into these and all investigations.

18. My Office recognises that to effectively respond to these serious crimes, not only must they be addressed in Libya, but the criminal networks that facilitate such activities operating outside of Libya must also face justice.  A multi-layered and multi-party strategy is therefore required to tackle the web of crimes that thrive in the context of migration through Libya.  To this end, my Office continues to work collaboratively with various States, including Libya, as well as international law enforcement organisations. Information on crimes committed against migrants in Libya, and on the business model used to perpetuate these horrific acts, is gathered, shared and analysed.

19. We engage in this coordinated effort in the spirit of complementarity and in line with Goal 9 of my Office's Strategic Plan.

20.  Pursuant to this cooperation model, efforts are being made to identify which entities are best placed to investigate or prosecute alleged crimes and determine what further support other partners can provide. The aim is to close the impunity gap at national, transnational and international levels and to hold accountable all those who commit these alleged crimes.  I am pleased to inform you that this cooperation strategy is proving effective.

21. My Office also continues to benefit from, and is grateful for, the excellent cooperation it receives from the United Nations Support Mission in Libya and the Libyan Prosecutor General's Office.

22. As you are aware, within the Rome statute system of international criminal justice, the arrest and surrender of ICC suspects remains one of the most challenging issues for my Office and the ICC as a whole. There can be no justice for the victims, and the aims of prevention and deterrence also suffer, unless ICC suspects are arrested and transferred to the Court to stand trial.

23. Contrary to the urging of members of this Council, and despite concerted efforts by my Office and the Registry of the Court, not one suspect in the Libya situation has been surrendered to the ICC.

24. Mr Gaddafi is at large and despite his self-claimed release from custody over two years ago, he has shown no intention to surrender himself to the Court or to the competent authorities in Libya.

25. In relation to Mr Al-Tuhamy Mohamed Khaled, former head of the Libyan Internal Security Agency, this Council will recall that in April 2017, upon my request, the Pre-Trial Chamber made public a warrant originally issued under seal in April 2013.

26. While under seal, the warrant remained unexecuted for more than four years, despite diligent efforts by the Registry and my Office. I hoped that unsealing the warrant of arrest could facilitate Mr Al-Tuhamy's arrest and surrender to the Court. It is deeply regrettable that Mr Al-Tuhamy remains at large.

27. Concerning the case of Mr Mahmoud Mustafa Busayf Al-Werfalli, a commander in the Al-Saiqa Brigade operating in and around Benghazi, this Council will recall that on the 15th of August 2017, a Pre-Trial Chamber of the Court issued an arrest warrant against him, having found reasonable grounds to believe that he is criminally responsible for seven execution incidents resulting in the murder of 33 individuals.

28. Mr Al-Werfalli is yet another ICC suspect not yet arrested and surrendered to the Court. Furthermore, despite repeated claims by the Libyan National Army that Mr Al-Werfalli had been arrested and was being investigated, he is alleged to have murdered an additional 10 people earlier this year on the 24th of January in Benghazi.

30. Mr Al-Werfalli is alleged to have committed war crimes. He must be apprehended and surrendered to the Court to answer these serious charges. The Court's legal proceedings will afford him, as for every ICC suspect, all due process rights guaranteed under the Rome Statute.

31. Information obtained through our on-going investigations indicates that Mr Gaddafi and Mr Al-Werfalli are in Libya, while Mr Al-Tuhamy is outside Libya.

32. If ICC fugitives are permitted to remain at large, the mandate of the Court to hold those responsible for the most serious crimes of concern to the international community will continue to be frustrated, and the Council's referral of the situation in Libya to the ICC will be rendered ineffective. My Office will continue to do its part pursuant to its obligations under the Rome Statute.  This Council also bears a responsibility following its referral to support such work. Moreover, States Parties and non-States Parties should take all necessary steps to effect the arrest and surrender of these fugitives to the ICC.

33. In the absence of effective accountability for atrocity crimes, impunity will continue to reign in Libya, causing greater suffering and instability.

34. Allow me to observe that I very much welcomed the convening of the first Arria-formula meeting on relations between this Council and the ICC, held in July, on the eve of the 20th anniversary of the adoption of the Rome Statute. The gathering, co-sponsored by the Kingdom of The Netherlands and other ICC States Parties on the Council, provided a unique opportunity to reflect on the important relationship between my Office, and more broadly the Court, and this Council, and to make proposals on ways to strengthen that relationship. I wish to reiterate my gratitude to all co-sponsoring states, the Council, and all who contributed to those productive discussions.

35. The ICC seeks independent and impartial justice through individual criminal accountability for grave crimes that threaten the peace, security and well-being of the world, in an effort to end impunity and contribute to the prevention of such crimes.

36. The primary responsibility of this Council is the maintenance of international peace and security.

37. Our two institutions must therefore work together if we are to achieve our different, yet mutually reinforcing mandates.

38. I conclude by expressing my appreciation for the continued support members of this Council offer in relation to the difficult but essential work my Office carries out in connection with the Libya situation.

39. During my last briefing in May, many here today recognised the ICC's important work in tackling impunity for serious crimes of international concern, and contributing to the maintenance of peace and security. A number of Council members offered their full support and cooperation in relation to the arrest and surrender of individuals subject to ICC warrants of arrest.

40. These genuine expressions of support are very welcome. However, I respectfully submit these words must be complemented by real action in support of the ICC.

41. Some twenty years have passed since the Rome Statute was adopted. I continue to believe that the creation of the ICC must surely be one of humanity's proudest moments.  Yet we have much work to do, and tangible support by this Council is vital to the realisation of the ICC's full potential to address impunity for the world's most serious crimes.

42. I look forward to effective support and concrete action from this Council to ensure that our separate, yet interlinked mandates can positively contribute to the cause of peace, stability and justice in Libya.

43. I thank you for your attention.