Skip to main content
Statement of the Prosecutor of the International Criminal Court, Fatou Bensouda, at a press conference in Uganda: justice will ultimately be dispensed for LRA crimes

Statement of the Prosecutor of the International Criminal Court, Fatou Bensouda, at a press conference in Uganda: justice will ultimately be dispensed for LRA crimes 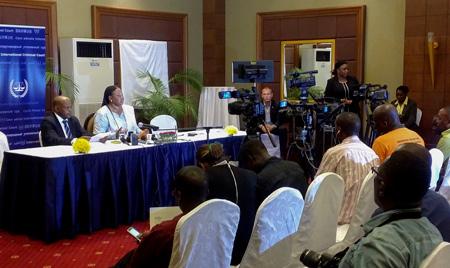 Welcome and thank you for your presence here today.  As you may know, while I have had the privilege to visit Uganda in the past in my previous role as Deputy Prosecutor, this is my first official visit to the country as Prosecutor of the International Criminal Court ("ICC" or the "Court"). I am honoured to be here.

I attach great importance to personally visiting situation countries under the jurisdiction of the Court; first and foremost, to meet with affected communities as well as the authorities, civil society, and members of the media, among other stakeholders.

I'm sure you have many questions.  I look forward to answering them following my remarks.

Allow me at the outset to recall where we started, where we stand today and where we are headed in our long journey to bring justice to the victims of mass crimes committed by the Lord's Resistance Army ("LRA").

Let me first reassure the people of Uganda and, in particular, the people of the North as well as Mr Ongwen's family, that Mr Ongwen will be treated with dignity throughout the proceedings at the Court and subjected to a fair and impartial judicial process of the highest international standards that will fully respect all his rights as a defendant. A panel of three independent judges will listen to all sides and assess all evidence and submissions before taking any decision. At all times, it will be up to my Office to prove its case against Mr Ongwen.

The Republic of Uganda ratified the Rome Statute – the Court's founding treaty – on the 14th of June 2002.

On the 16th of December 2003 and in the exercise of its sovereign right under the Statute, the Government of Uganda referred the situation in Northern Uganda to the Office of the Prosecutor of the ICC.

The referral letter cited LRA and called for its members who had committed crimes in Northern Uganda to be brought to justice.

The Office of the Prosecutor made it clear to the Government that all sides involved in the conflict in the North would be investigated and the evidence alone would determine which individuals would ultimately be charged, irrespective of status or affiliation.

I wish to underscore here that, without exception, we conduct our investigations in complete independence and impartiality.  We have always been, and continue to be, guided by these same principles with respect to our work in Uganda.

On the 28th of July 2004, following a rigorous process of assessing whether legal requirements for opening an investigation had been met, the Office of the Prosecutor opened investigations into the alleged crimes committed in Northern Uganda.

The evidence we collected demonstrated that crimes against humanity and war crimes - including the mass killing and mutilation of civilians, the abduction of tens of thousands of children and the sexual enslavement and rape of young girls - were committed by the LRA in all regions of Northern Uganda.

The evidence also implicated senior commanders in the LRA, namely Joseph Kony; Dominic Ongwen; Okot Odhiambo; Vincent Otti and Raska Lukwiya as being the most responsible for mass crimes.

We presented the evidence at our disposal to a panel of three independent international judges and requested the arrest of these five individuals.

After careful consideration and assessment of the evidence, on the 8th of July 2005, the Court's judges issued warrants of arrest against these top five commanders.

All LRA commanders who are the subject of ICC warrants of arrest, including Mr Ongwen, were charged for crimes they are alleged to have committed as adults.

We do not prosecute child soldiers for crimes committed under the age of 18. This is a strict requirement of the Rome Statute.

We remain confident that one day, Joseph Kony will face justice for the enlistment and recruitment of children - including Mr Ongwen - to participate in his campaign of violence.

Over the course of many years, the LRA, under the leadership of the five commanders, has continued to commit heinous crimes not only in Northern Uganda but in the Central African Republic ("CAR") and the Democratic Republic of Congo ("DRC").

On the 16th of January 2015, the numerous coordinated efforts over the years by civil society, the governments of Uganda, DRC, CAR, and the United States of America, as well as the African Union and the ICC, finally paid off when Mr Ongwen was transferred to the custody of the Court after nearly a decade of evading justice.

His transfer sends a firm and clear message that no matter how long it takes, the Office of the Prosecutor and the international community at large will spare no effort to ensure that victims of mass crimes ultimately receive justice.

This is a promising development, but it is only the beginning.

Let me emphasize this message to Joseph Kony:

Leave the bush and encourage other members of the LRA to do the same. Stop committing crimes against your own people and others, do the right thing and surrender.

At the ICC, you will be treated fairly and impartially, in accordance with highest standards of justice, and with full respect for your due process rights as a defendant.   You have the opportunity to plead your case in Court and let the judicial process establish the truth.  There is no future in violence and brutality.

Let me be equally clear to all other LRA fighters and followers:

You have nothing to fear from the ICC. We are only concerned with those five top commanders against whom the Court has issued warrants of arrest.  Abandon violence and choose a new, more promising path; a path which has a future.  Return to your families, communities and country, and start the process of rebuilding your life.  It is not too late.

So, what comes next in the Ongwen case, you may ask?

As a first step, on the 26th of January 2015, Mr Ongwen appeared before the Court's judges who explained to him his rights, including the right to freely choose his own lawyer.

The next step will be the confirmation of charges hearing.  Although the judges have provisionally scheduled these proceedings for August of this year, my Office has asked for an extension in light of the many years that have passed since arrest warrants were issued in this case. The additional time requested can also be of assistance to Mr Ongwen in preparing his defence.

The process of facilitating preparations for Mr Ongwen's defence has started. This entails, amongst other things, providing Mr Ongwen's lawyer and legal team with all the information he needs to prepare his defence, such as the evidence my Office has gathered against him.

My Office has always benefited from the strong cooperation of Ugandan authorities, for which we are thankful.  Throughout this process, the continued cooperation of the Government of Uganda with both my Office and the defence will be crucial.

Following my meetings with Uganda government officials today, I am confident of the Government's cooperation and support to my Office, to the defence and the Legal Representatives of Victims, as we continue on the path of fair and impartial justice for the people of Uganda.

I am also pleased to announce that tomorrow, I will be travelling to the North of the country where I will meet with community and religious leaders as well as affected communities in Gulu, Lira and Soroti, as part of my efforts to explain our work and to listen and address concerns.  I very much look forward to this opportunity.

I have ensured that my team will regularly visit Uganda, and in particular the North, to continue engaging with affected communities and to keep them all informed of the latest developments in the case as proceedings progress.

My appeal to you and to all Ugandans, and in particular affected communities, is this:

The wheels of justice may turn slowly but turn, they surely will; let us leave justice to take its course. Let us embrace the independent and impartial judicial process offered by the Court as a means of bringing healing and closure for victims of mass crimes and to ensure the atrocities that devastated communities in Northern Uganda will never happen again.

We are committed to these goals. We are committed to seeing peace and stability thrive in Uganda on the strength of justice and the recognition of the importance of the plight of victims and affected communities. I thank you for your attention.

The Office of the Prosecutor of the ICC conducts independent and impartial investigations and prosecution of the crimes of genocide, crimes against humanity and war crimes. The Office of the Prosecutor has opened investigations in: Uganda; Democratic Republic of the Congo; Darfur, Sudan; Central African Republic; Kenya; Libya; Côte d'Ivoire and Mali. The Office is also conducting preliminary examinations relating to the situations in Afghanistan, Colombia, Georgia, Guinea, Honduras, Iraq, Nigeria, Ukraine and Palestine.