Skip to main content
Statement to the press by Fatou Bensouda, Prosecutor of the International Criminal Court

Statement to the press by Fatou Bensouda, Prosecutor of the International Criminal Court 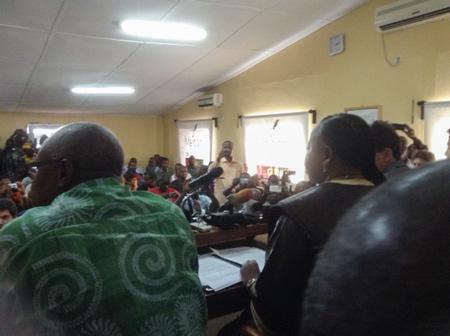 Thank you for attending this afternoon's press conference.

At the outset, I would like to thank His Excellency the President and Head of State of the Republic of Guinea, Professor Alpha Condé, and the Minister of Justice Maître Cheick Sako, for their long standing invitation for me to conduct another official visit to the country.

I am grateful for their welcome, and also take this opportunity to underscore the quality of the cooperation provided to my Office by the Guinean authorities over the past six years.  Since the opening of its preliminary examination in the weeks following the horrific events of 28 September 2009, my Office has conducted eleven visits to Guinea, the latest in May of this year. In this context, it is the fourth visit I have personally undertaken to Guinea.

Why are we here? Firstly, I am here to update myself on the judicial investigation concerning crimes committed on 28 September 2009, conducted by Guinean authorities in accordance with their primary responsibility to bring to justice those responsible for crimes under the jurisdiction of the International Criminal Court ("ICC").  I am also here to gauge the prospects of a trial starting within a reasonable time frame.

To this end, yesterday and today I have had a number of meetings with the Guinean authorities, the magistrates in charge of the domestic investigations, representatives of the diplomatic community, civil society as well as victims. Following these meetings, I note that significant and encouraging progress has been made in the investigation carried out by the panel of investigative judges. Numerous high ranking individuals have been indicted and hundreds of victims and key witnesses have been interviewed.

I would like to pay tribute to the enduring determination and dignity of the victims, and especially victims of sexual violence, for the decisive role they are playing in advancing these investigations. They have been waiting for six long years to see justice done.

In this process, it is important to recognise the support provided by the Guinean authorities and in particular the Minister of Justice to the investigative judges in their work. The judges have received extra resources to execute their mandate in full independence, despite significant challenges such as the Ebola crisis which the country has been facing.

The second goal of my visit is related to my Office's preventive mandate. It is absolutely crucial to prevent further crimes from being committed, no matter the situation or circumstance. We know that violence can erupt during elections. I reiterate my 2010 call to all Guinean political actors, to ensure that elections remain calm and that their supporters refrain from violence. I am confident that this message will be heard by all Guineans. I will continue to closely monitor this situation.

In the upcoming months, in accordance with its status as a State Party to the ICC, Guinea can and must demonstrate its will and ability to actively fight against impunity and put an end to violence.