Statement of the International Criminal Court Prosecutor, Luis Moreno-Ocampo, on decision by Pre-Trial Chamber I to issue three warrants of arrest for Muammar Gaddafi, Saif Al-Islam Gaddafi and Abdulla Al-Senussi 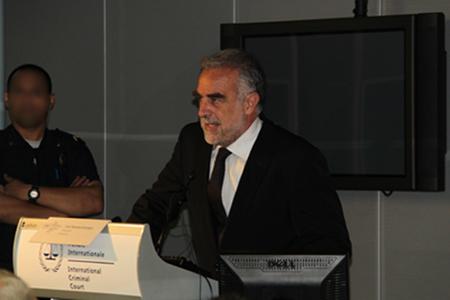 Just 4 months ago, the world requested justice for crimes committed in Libya and the UN Security Council unanimously asked for the intervention of the International Criminal Court. Yesterday, the Court delivered its first decision, it issued arrest warrants against Muammar Gaddafi, his son Saif Al-Islam Gaddafi and Abdullah Al Senussi for shooting civilians on the streets and persecuting alleged dissidents in their homes as crimes against humanity. The Judges considered that they have to be arrested to prevent them from using their powers to continue the commission of crimes.

Today, it is time for arrest. Let me clarify who should arrest them and how they can do it.

Libya has the primary responsibility to implement the arrest warrants. Libya is not a State Party of the Rome Statute, but it is a member of the United Nations since 1955. Libya has to comply with UN Security Council Resolution 1970, which specifically called on Libya to ‘cooperate fully with and provide any necessary assistance to the Court and the Prosecutor.’

Second option, the Interim National Council has expressed its will to implement the arrest warrants. Justice Minister Mohamed Al Alagi is here, and Prime Minister Mahmoud Gibril is coming tomorrow. They will explain their plans as soon they are ready.

International forces operating under UN Security Council Resolution 1973 have no specific mandate to implement arrest warrants, and the Court is not asking for that.

More than ever there is an urgent need for negotiations. But negotiations have to respect UN Security Council Resolution 1970 to do justice in Libya and the Court’s decision that Gaddafi, his son Saif and Al Sanussi should be arrested.

There are two clear legal limits. Gaddafi cannot retain power to keep attacking his victims. If Gaddafi travels to a State Party of the Rome Statute, he should be arrested.

The Office of the Prosecutor will continue investigating new crimes regarding the situation in Libya since 15 February 2011, in particular allegations of rapes and efforts to cover up the crimes; we will eventually add new charges to the same case.

Source: Office of the Prosecutor