Skip to main content
Statement of ICC Prosecutor to the United Nations Security Council on the Situation in Darfur, pursuant to UNSCR 1593 (2005)

Statement of ICC Prosecutor to the United Nations Security Council on the Situation in Darfur, pursuant to UNSCR 1593 (2005)

Due to COVID-19 restrictions, ICC Prosecutor, Fatou Bensouda, presents her Office’s 32nd report on the Situation in Darfur to the UN Security Council remotely through VTC. ©ICC-CPI<br>

1. I welcome the opportunity to present my thirty-second report regarding the situation in Darfur pursuant to this Council's Resolution 1593 and to brief you on recent developments.

2. Before doing so, I congratulate South Africa on assuming the Presidency of the Council for the month of December and wish you, Mr President, continued success in the essential work before you.

3. Once again, I am briefing this Council virtually as the world continues to navigate the uncertain era of the COVID-19 pandemic.

4. Since my last update in June 2020, there have been significant developments in the Darfur situation. Today, I will focus on two of these important developments: the ongoing case against Mr Ali Muhammad Ali Abd-Al-Rahman, also known as Ali Kushayb, and the directly related issue of the status of cooperation between my Office and the Government of the Sudan.

5. Fifteen years after the referral of the situation in Darfur to the International Criminal Court ("ICC" or the "Court") pursuant to Resolution 1593, the victims of the crimes in Darfur finally have a chance to finally see justice in relation to one of the cases.

6. My written report sets out the main judicial developments in the case against Mr Abd-Al-Rahman, who, as you are aware from my June report, was transferred to the International Criminal Court on 9 June 2020, following his voluntary surrender to  authorities in the Central African Republic. My Office, assisted by the Registry of the Court, was able to secure the surrender and transfer of the suspect to the custody of the ICC notwithstanding the operational challenges presented by the COVID pandemic.

7. You will recall that the ICC judges have issued two arrest warrants against Mr Abd-Al-Rahman, for multiple counts of war crimes and crimes against humanity, allegedly committed in Darfur.

9. Mr Abd-Al-Rahman made his initial appearance before ICC Pre-Trial Chamber II on 15 June 2020. The Pre-Trial Chamber scheduled the confirmation of charges hearing for 7 December 2020. This hearing has since been postponed to 22 February 2021.

11. Despite limited resources, my Office is adapting to the new reality and related restrictions of the COVID-19 pandemic, in its pursuit of justice for victims in the Darfur situation.

12. My team of investigators, analysts, advisers and lawyers has been working under difficult conditions, including conducting missions in Europe and Africa, to expedite preparations for Mr Abd-Al-Rahman's confirmation of charges hearing.

13. The planning, preparation and conduct of these missions have been heavily impacted – and, at times, unavoidably delayed – by the challenges that my Office, cooperating States and other partners have had to overcome, to enable my team to conduct its work in the circumstances of a global pandemic.

14. I take this opportunity to express my appreciation to the team for their hard work and resilience during these last six months, in extremely challenging circumstances.

15. During the reporting period, my Office has continued to monitor alleged crimes in Darfur, which may fall within the Court's jurisdiction.

16. There are repeated allegations of attacks on civilians in Darfur, occurring mainly in June and July. These attacks reportedly resulted in significant casualties. Alarmingly, there are continuing reports of sexual and gender-based violence and crimes against children. Attacks such as these must stop and the protection of civilians must remain a priority.

17. I welcome the Juba Peace Agreement, signed on 3 October 2020, between the Sovereignty Council and the Sudan Revolutionary Front and other movements. I am hopeful this agreement will help bring justice to the victims of atrocity crimes in Darfur and build sustainable and prosperous peace in Sudan.

18. I commend the parties' agreement to create a Special Court for Darfur Crimes and a Truth and Reconciliation Commission. I also welcome the importance the Juba Peace Agreement affords to the ICC, and the emphasis placed on cooperation between Sudan and the Court in relation to the five ICC suspects, which include, of course, Mr Abd-Al-Rahman.

19. Indeed, the parties are committed to facilitating the appearance of those wanted before the ICC, providing ICC prosecutors and investigators with access to victims, witnesses and investigation sites, and allowing ICC personnel to freely travel throughout Sudan. The Juba Peace Agreement also states that the parties shall not interfere with ICC investigations, and shall ensure the safety of victims and witnesses.

20. I also welcome Sudan's recent repeal of criminal law provisions that prevented cooperation with the ICC. 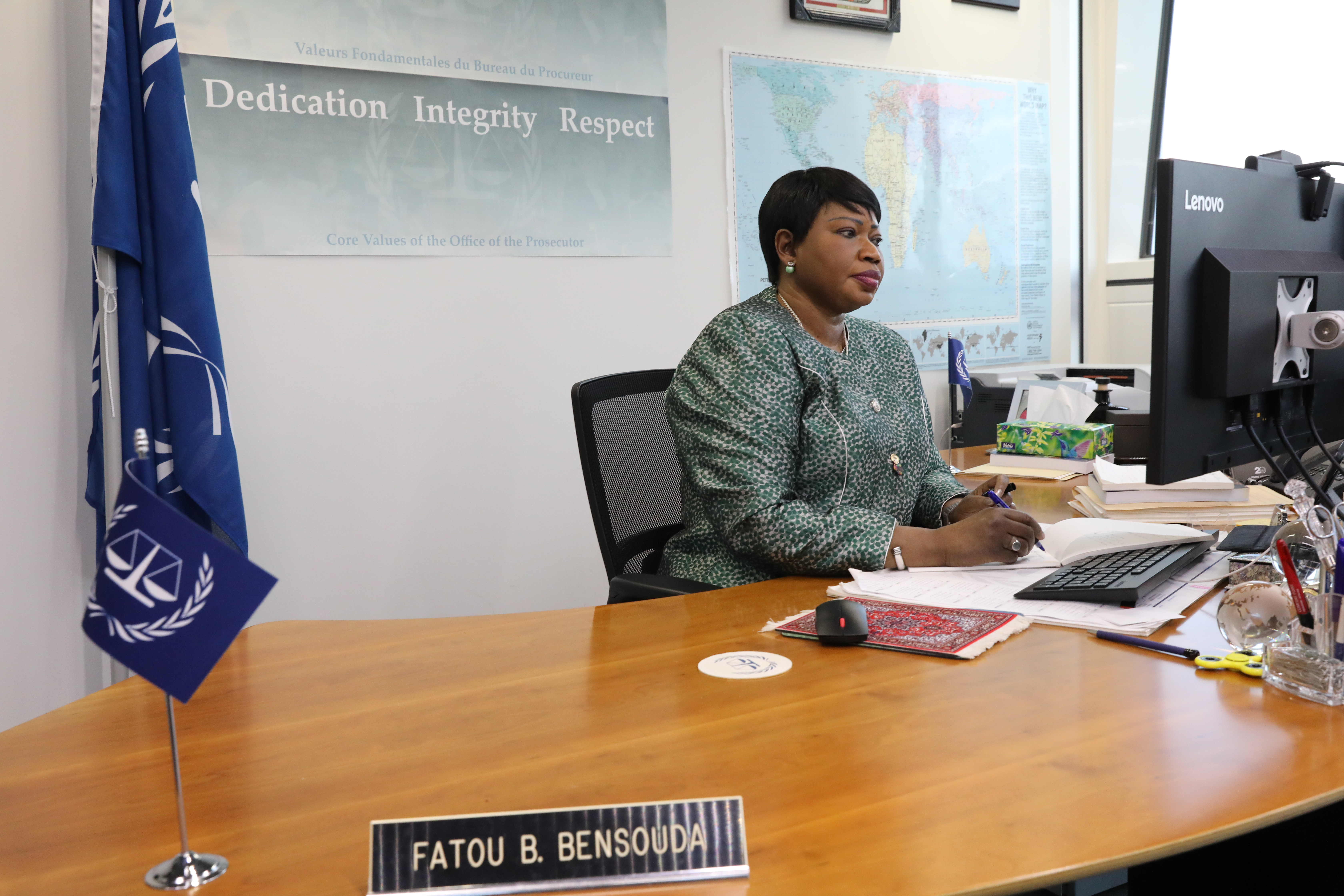 21. In October, I led the first mission by my Office to Sudan in  13 years. In Khartoum, my team and I engaged in productive meetings with the highest officials of the Government of the Sudan.

22. I also held fruitful discussions with representatives of civil society organisations, international bodies and the diplomatic corps in Khartoum.

23. Those meetings allowed my team to explain the ICC proceedings and the status of the Darfur cases. Our discussions also presented an opportunity to hear directly from the Sudanese authorities about their plans for cooperation with my Office and their commitment to accountability and justice for the people of Darfur.

24. My visit to Khartoum further gave my delegation and the Government of the Sudan the opportunity to hold preliminary discussions on the possible mechanisms to bring the suspects against whom ICC warrants have already been issued, to justice.

25. I welcome the assurances of support, cooperation and the commitment to justice expressed by the authorities during my mission to Khartoum. I am also hopeful that the draft memorandum of understanding on modalities of cooperation, submitted by my Office to Sudan shortly after the mission, can be swiftly concluded. At the present time, we are waiting for the authorities of Sudan to provide their reaction to the draft.

26. In Khartoum, I stressed in particular, the urgent need for my investigators to be given access to the territory of Sudan; I emphasised that time is of the essence as my team strives to meet the various deadlines set by the Court's judges in Mr Abd-Al-Rahman's case. I reiterate this call and urge this Council to impress upon Sudan the urgent need for my investigators to access its territory and in particular, to conduct investigative missions in Darfur without further delay.

27. It had been my hope that my team would have travelled to Sudan in November for an operational assessment mission to pave the way for fully fledged investigative activities immediately thereafter. Unfortunately, this mission was postponed at the request of the Sudanese authorities. No new dates have been offered and the window of opportunity to conduct investigations prior to Mr Abd-Al-Rahman's confirmation of charges hearing is rapidly closing.

28. Unless the mission is rescheduled soon, my Office risks losing a golden opportunity to directly engage with victims and witnesses, in situ, for the first time and to ensure their evidence is made available to the judges at Mr Abd-Al-Rahman's confirmation of charges hearing, currently scheduled for 22 February 2021.

29. Sudan's immediate facilitation of access to its territory would demonstrate to victims, to the Sudanese people and to the international community including this Council, that Sudan seriously intends to implement the principles adopted in the Juba Peace Agreement and this Council's Resolution which referred the situation of Darfur to my Office. It would further give concrete expression to the assurances of cooperation conveyed to me in person during the recent historic visit of my Office to Khartoum. It would equally signal that Sudan is genuinely committed to the path of justice.

30. My Office stands ready to work collaboratively with Sudan as it charts its way towards accountability for the atrocity crimes alleged to have been committed in Darfur.

32. To date, my Office has not received any official confirmation by the competent authorities of Sudan on what actions they intend to take in relation to the remaining ICC suspects, who, with the exception of Mr Banda, are reportedly in their custody.

33. I take this opportunity to appeal to this Council and through you, to the authorities of the Government of the Sudan, to intensify the dialogue with my Office in relation to these outstanding warrants. We must ensure, with full respect for the principle of complementarity, that all the ICC suspects are brought to justice through fair, objective and independent proceedings, either before the Court, or in Sudanese courts, guided by the requirements of the Rome Statute. This Council can play a decisive role in expediting this process and ensuring Sudan's full, prompt and tangible cooperation with the ICC, consistent with its international obligations. The victims of atrocity crimes in Darfur deserve to finally see real progress in the pursuit of justice.

34. I would like to acknowledge and express appreciation for the fruitful cooperation between my Office and other States in Africa, Europe and beyond, in relation to our investigative activities in the Darfur situation.

35. The support and cooperation of all States in the execution of Resolution 1593 is essential for the success of my Office's investigations, particularly in the case against Mr Abd-Al-Rahman. The progress my Office has been able to make thus far, despite the significant challenges we face, would not have been possible without the principled cooperation of a number of States, including a number of those who sit on this Council. Allow me to express my sincere gratitude for this unwavering support.

36. I must also express my heartfelt thanks and respect to the inspirational witnesses, victims and other individuals and organisations who continue to do everything in their power to pursue justice and accountability for crimes in Darfur.

37. Despite the many challenges faced by my Office in the course of its work, we remain undeterred by any obstacles, including political interference, in pursuit of justice for the victims in the Darfur situation.

38. My recent mission to Khartoum, and the related high-level meetings, represent a turning point in the Office's formal relationship with the Government of the Sudan. During those meetings, a number of the highest officials assured me that Sudan's commitment to justice in Darfur was genuine and that the presence of my delegation in Khartoum was a demonstration of that. I do not doubt the sincerity of those words, but they must be matched, now, with concrete action, starting with unimpeded access for my investigators to witnesses, crime scenes and other evidence in Darfur.

39. My next report on the Darfur situation will be in June 2021. It will be my last report to this Council as Prosecutor of the ICC. During that final report, I hope to be in a position to brief you on the activities that my Office has conducted on the ground in Darfur. Before then, I also hope to visit Darfur myself, to engage with victims and pay personal tribute to the courage, resilience and patience they have demonstrated since this Council's referral first ignited their hopes for justice, 15 years ago.

40. This access to Darfur is what the victims expect, and it is what Sudan, with the support of this Council, must immediately facilitate.

41. The developments in Sudan give renewed hope for justice and accountability in Darfur. These hopes must not be dashed.

42. These promising developments also convey a clear message, and that is: politics that aim to undermine the progressive movement towards greater accountability for atrocity crimes have a limited shelf life as they go against the currents of modern history and humanity's quest, and indeed need, for a more just world.

43. I thank you for your attention and crucial support. |