Statement by ICC Prosecutor, Mrs Fatou Bensouda, on the referral submitted by Palestine 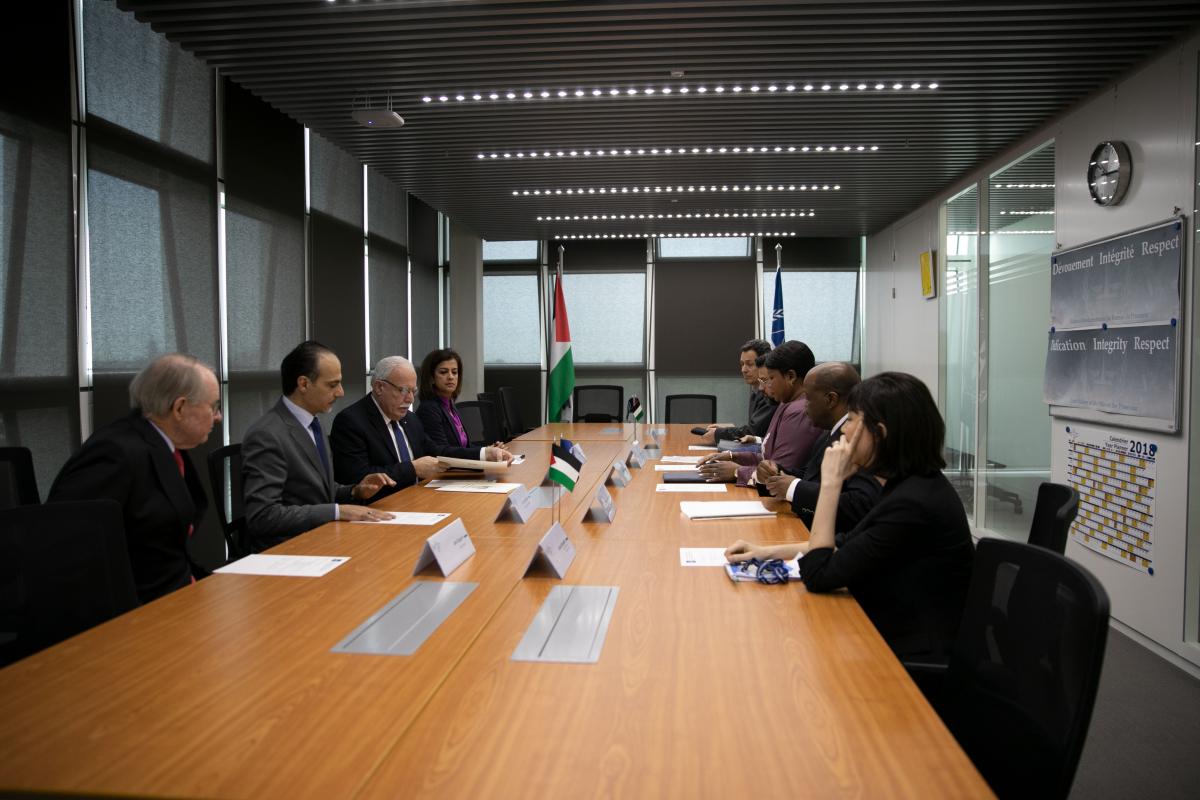 Photo&#58; 22 May 2018 – ICC Prosecutor, Mrs Fatou Bensouda and her team meet the Minister of Foreign Affairs and Expatriates of Palestine, H.E. Dr Riad Malki and delegation at the Court’s Headquarters © ICC-CPI

Today, 22 May 2018, I received a referral from the Government of the State of Palestine ("Palestine"), a State Party to the Rome Statute, regarding the situation in Palestine since 13 June 2014 with no end date.

Specifically, pursuant to articles 13(a) and 14 of the Rome Statute of the International Criminal Court ("ICC" or "Court"), the State of Palestine "requests the Prosecutor to investigate, in accordance with the temporal jurisdiction of the Court, past, ongoing and future crimes within the court's jurisdiction, committed in all parts of the territory of the State of Palestine". Pursuant to Regulation 45 of the Regulations of the Court, I have informed the ICC Presidency of this referral.

This is the eighth referral to be received from a State Party since the Rome Statute came into force on 1 July 2002. Previously, the Governments of Uganda (2004), the Democratic Republic of the Congo (2004), the Central African Republic (2004 and 2014), Mali (2012), the Comoros Islands (2013) and the Gabonese Republic (2016) each referred a situation to my Office in accordance with their prerogatives as a State Party.

Since 16 January 2015, the situation in Palestine has been subject to a preliminary examination in order to ascertain whether the criteria for opening an investigation are met. This preliminary examination has seen important progress and will continue to follow its normal course, strictly guided by the requirements of the Rome Statute.

Specifically, under article 53(1) of the Statute, as Prosecutor, I must consider issues of jurisdiction, admissibility and the interests of justice in making this determination. As noted in the Office's Policy Paper on Preliminary Examinations, these factors are applied to all situations, irrespective of whether the preliminary examination was initiated on the basis of information received on crimes, by a referral from a State Party or the United Nations Security Council, or by a declaration lodged pursuant to article 12(3) of the Statute. In all circumstances, my Office independently evaluates and analyses the information received.

A referral or an article 12(3) declaration does not automatically lead to the opening of an investigation.  Should I, however, ultimately determine that the situation referred warrants an investigation in accordance with the statutory criteria, as a result of this referral, the Statute does not require the Prosecutor to seek authorisation from the Pre-Trial Chamber of the Court in order to proceed with an investigation.

There should be no doubt that in this and any other situation before my Office, I will always take the decision warranted by my mandate under the Rome Statute.

The ICC's Office of the Prosecutor conducts independent and impartial preliminary examinations, investigations and prosecutions of the crime of genocide, crimes against humanity and war crimes. Since 2003, the Office has been conducting investigations in multiple situations within the ICC's jurisdiction, namely in Uganda; the Democratic Republic of the Congo; Darfur, Sudan; the Central African Republic (two distinct situations); Kenya; Libya; Côte d'Ivoire; Mali; Georgia and Burundi. Pre-Trial Chamber II is seized of the Prosecutor's request for authorisation to commence an investigation into the situation in the Islamic Republic of Afghanistan. The Office is also conducting preliminary examinations relating to the situations in Colombia; the Gabonese Republic; Guinea; Iraq/UK; Nigeria; Palestine; The Philippines; Venezuela and Ukraine.