Skip to main content
Statement of ICC Prosecutor Fatou Bensouda to the United Nations Security Council on the Situation in Darfur, Sudan pursuant to UNSCR 1593 (2005)

Statement of ICC Prosecutor Fatou Bensouda to the United Nations Security Council on the Situation in Darfur, Sudan pursuant to UNSCR 1593 (2005) 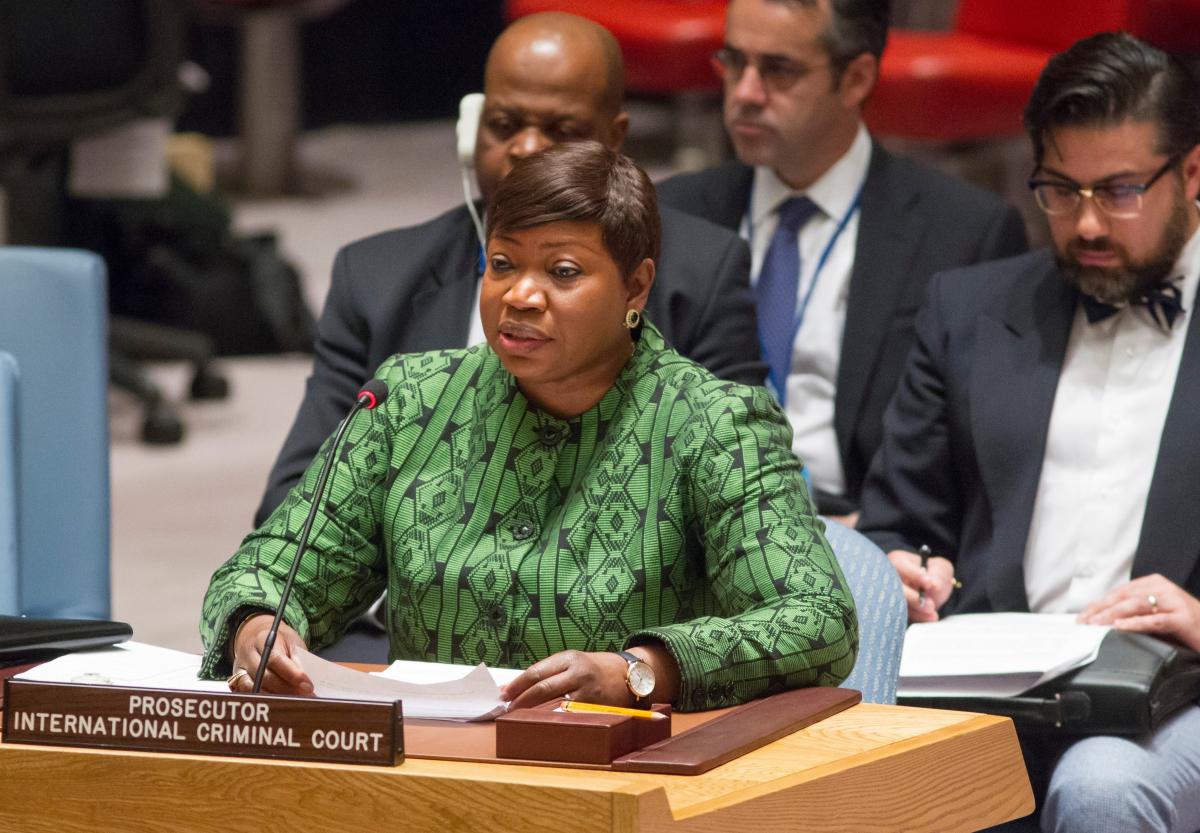 1. Thank you for the opportunity to once again engage with the Council on the occasion of my Office's Twenty-Third report on the Darfur situation.

2. It has been more than a decade since the UN Security Council through Resolution 1593 referred the situation in Darfur to my Office.  Resolution 1593 served as a message of hope for the victims of Darfur subjected to grave crimes under the Rome Statute that they would finally see accountability and justice for their suffering.

3. Today, those victims' quest for justice is as far from being realized as it was eleven years ago. Worrying still, grave crimes continue to be committed in Darfur resulting in further victimisation and suffering.  This reality is to be lamented by all people of good conscience.

4. Over the years since the adoption of Resolution 1593, my Office's message to this august body regarding Sudan's flagrant disregard of this Council's resolutions has been principled, consistent and clear. Sadly, my Office's countless appeals to you for action to address the persistent failure of Sudan to comply with its international obligations have not been heeded.

5. I respectfully note that regrettably this Council has been equally consistent in its conspicuous silence over Sudan's non-compliance with its own resolutions.

6. This inaction by the Council has issued in adverse consequences.

7. First, it has emboldened Mr Al Bashir to continue travelling across international borders despite the fact that two arrest warrants have been issued against him by the Court.

8. Second, the Council's failure to act in response to 11 findings of non-compliance issued by ICC judges has equally emboldened states, both parties as well as certain non-parties to the Rome Statute, not only to facilitate Mr Al Bashir's travels to their territories but to invite and host him.

9. A reasonable observer cannot be faulted for asking: how many more such findings must be rendered by the Court to spur this Council into action?   The victims group of Darfur I will be meeting later today will surely, and indeed, rightly have such questions on their minds.

10. This evolving trend risks setting an ominous precedent, which unless it sees redirection, will not bode well for similar genuine efforts aimed at bringing those responsible for mass atrocities to justice.

11. What message are we sending to would-be perpetrators if those against whom international warrants have been issued for the world's most egregious crimes can travel freely, and without any repercussions for those who facilitate, or worse, keep suspects of atrocity crimes as company.

12. Above all, such nonfeasance has emboldened some states to publicly express pride in disregarding the Council's authority. This trend of non–compliance with Chapter VII of the UN Charter resolutions continues to exacerbate victims' frustrations and should be a matter of great concern to us all.

13. It is should therefore be particularly concerning that violation of a Chapter VII resolution has become routine without any resulting condemnation or appropriate action by this Council.

14. With your indulgence, I would like to place the accent on several important observations in this regard.

15. Firstly, it is imperative for this Council to fully appreciate and embrace its inter-institutional relationship with the International Criminal Court within the framework of the Rome Statute, and with full respect for the respective independence of these important institutions.

16. More specifically, the Council must recognise that once a ruling of non-compliance has been referred to it pursuant to article 87.7 of the Rome Statute, it is duty bound to act, to give due consideration to the judicial ruling, and to take decisive action as appropriate.

17. To do otherwise would not only deprive article 87.7 of the Statute of its object and purpose and frustrate the ends of justice but also erode public confidence in the Council.

18. The Council cannot and must not remain silent and non-responsive on such judicial findings which are, after all, inherently linked to the resolution referring the Situation of Darfur to my Office

19. I invite and encourage you to give due consideration to the constructive proposal tabled by New Zealand calling for a structured approach in dealing with the Court's findings of state non-compliance.

20. A formula which has in the past proved useful for meaningful exchange of ideas is the Informal Interactive Dialogue between my Office and the Council.  To be sure, increased interaction between my Office and the Council will enable us to jointly reflect and generate proposals on strengthening our existing inter-institutional relationship in a manner that issues in more effective outcomes.

21. This is the least we can do to re-assure the victims of Darfur that they have not been forgotten; that both this Council and my Office are fully engaged and committed to finding solutions that ultimately ensure accountability and by extension bring peace and stability to Darfur.

22. My second broad observation relates to the obligations of states and cooperation.

23. Quoting from the International Court of Justice's advisory opinion on Namibia, the Pre-Trial Chamber of the ICC noted in an instance of non-compliance with Mr Al Bashir's arrest that: "when the Security Council adopts a decision under article 25 in accordance with the Charter, it is for member States to comply with that decision […]. To hold otherwise would be to deprive this principal organ of its essential functions and powers under the Charter."

24. The Pre-Trial Chamber in the same decision further emphasised the critical role of this Council in enforcing compliance with resolutions made under Chapter VII of the Charter of the United Nations.

25. To be clear, Sudan's failure to cooperate with the Court amounts to non-compliance – not the least, it is in breach of Resolution 1593. This Resolution has in effect brought Sudan under the full breath and ambit of the Rome Statute legal framework.

26. Regarding non-State Parties, when they fail to cooperate in the arrest and surrender of suspects against whom warrants of arrest have been issued by the Court in the Darfur Situation, they do so with complete disregard for Resolution 1593 which "urges" them to do the contrary – that is to fully cooperate with the Court.

27. As it concerns Rome Statute States Parties, a failure to arrest and surrender would not only constitute a violation of Resolution 1593, but a breach of their Rome Statute obligations – indeed, treaty obligations.

28. In either case, these breaches undermine the cause of international criminal justice and are a direct attack on the credibility of this Council which referred the situation in Darfur to my Office.

29. Despite these challenges, my Office is continuing its investigations with a view to deliver justice to the victims of grave crimes under the Rome Statute in Darfur.

30. A list of obstacles complicates our work: lack of access to the territory of Sudan; resource constraints and non-execution of the long outstanding arrest warrants have all contributed to the slow progress in investigations.

31. Nevertheless, my Office's strong belief that justice and accountability are key to lasting peace in Darfur continues to motivate us to exert every effort within the means and abilities at our disposal to advance the investigations as effectively as possible.

32. Leads that have the potential to yielding additional evidence continue to be followed even as the modest Darfur Team of my Office divides its time and energies between the Darfur dossier and other cases before us that are equally demanding.

33. Despite these difficulties, Mr President, we will not falter.

34. Our commitment to the victims of the crimes under the Rome Statute in Darfur and elsewhere is what inspires us and propels my Office forward to overcome challenges and to ultimately obtain the desired results.

35. We are unbending in this commitment.

36. My Office shares this Council's expression of deep concern in its Resolution 2265, at the increased violence and insecurity in Darfur, the significant increase in the number of internally displaced persons since 2014, and the restriction of humanitarian access to conflict areas where vulnerable civilian populations reside.

37. I am concerned about a significant increase in aerial bombardments and ground attacks, resulting in over 400 civilian deaths and up to 200 villages destroyed as reported.

38. In addition, 107 incidents of sexual crimes against women were reported, resulting in 225 victims. Seventy per cent of these alleged incidents involved gang-rape and nineteen per cent involved girls under the age of 18 years. Troops aligned with the Government of Sudan and unidentified assailants are the main alleged perpetrators.

39. Over 129,000 people have been displaced from Jebel Marra since mid-January. There might be thousands more displaced, hidden in the mountains of Jebel Marra, but as this Council is undoubtedly aware, the United Nations and humanitarian organisations have no access to those areas. There have been five reported incidents of attacks on humanitarian aid workers and peacekeepers, with one peacekeeper killed, in this reporting period.

40. In relation to allegations of on-going crimes, my Office is concerned over reports of the activities of the Government of Sudan Rapid Support Forces ("RSF"). The RSF have allegedly again been involved in the commission of crimes during the reporting period.

41. In one such attack in Central Darfur between 30 December 2015 and 1 January 2016, the Sudanese Armed Forces, RSF and Janjaweed attacked villages in East Jebel Marra. The attack was supported by air raids and artillery fire. Between four and six civilians were allegedly killed, including two children during the ground attack. In another attack on 21 January 2016, aerial bombardments reportedly killed 48 women and destroyed six houses.

42. As mentioned in my latest report, my Office notes that the modus operandi of the attacks employed by the Government of Sudan is similar to the manner in which the attacks were carried out in 2003 and 2004.

43. The continuation of the Government of Sudan's military attacks in Darfur in this manner must be halted.  In our assessment, the arrest and surrender of Mr Al Bashir and other accused in the situation in Darfur may assist in stopping these crimes.

44. In conclusion, this Council must no longer tolerate the continuing deteriorating humanitarian situation in Darfur; the continued non-cooperation of the Government of Sudan, and in particular, the refusal of Sudan to arrest and surrender suspects within its territory into the custody of the Court.

45. It is within the powers of the Council to reverse these trends through concrete action and resolve.

46. Meaningful follow-up in response to the Court's findings of non-compliance is one concrete step this Council can take to project its commitment to the victims of Darfur and to accountability as an indispensable and indivisible component of peace and security.

47. Again, I urge this Council to give serious consideration to the proposal made by New Zealand for a structured approach to dealing with ICC findings of non-compliance referred to the Council.

48. To be sure, without stronger and committed action by this Council and State Parties, the situation in Sudan is unlikely to improve; the alleged perpetrators of serious crimes against the civilian population will not be brought to justice, and the prospects for a lingering conflict will become more acute.

49. Justice and accountability for the grave crimes under the Rome Statute must not be sacrificed at the altar of political expediency.

51.    I thank you, Mr President, Your Excellencies, for your attention. | OTP