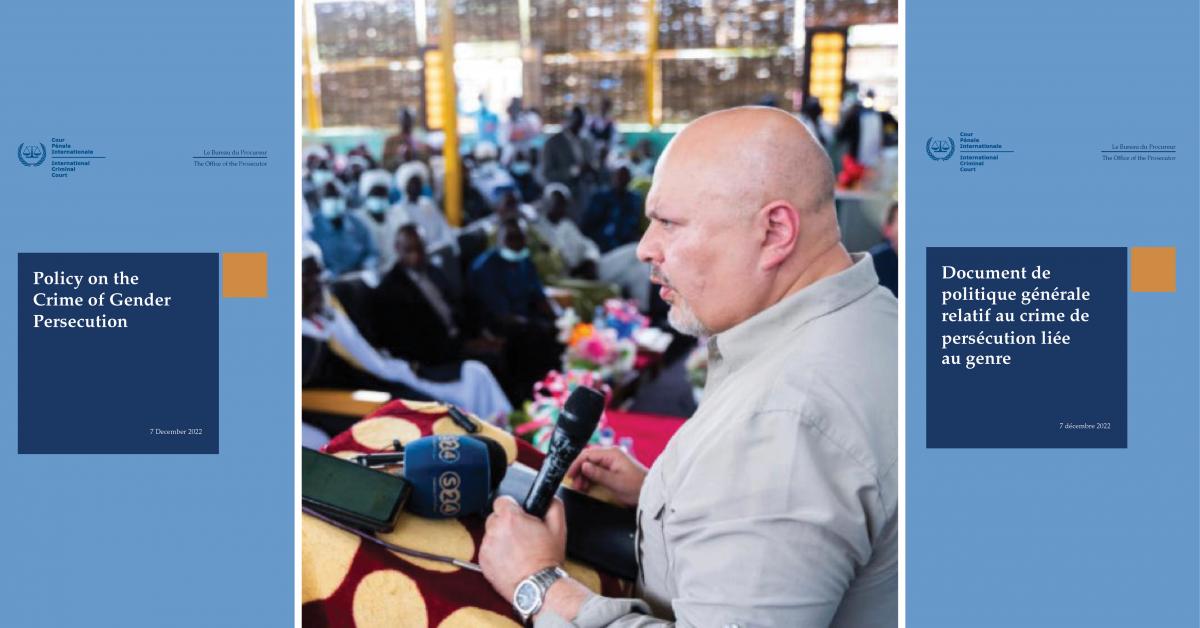 If we are to deliver justice for victims and ultimately break cycles of gender-based violence, we must first comprehend the discrimination that fuels these egregious acts. We must also recognise the complex nature of victimisation. Only then can we successfully advance accountability for the crime against humanity of persecution on the grounds of gender under the Rome Statute. I am firmly committed to ensuring that my Office systematically addresses sexual and gender-based crimes, and takes a deeper and more focused approach to investigating and prosecuting gender persecution. This latest policy paper initiative is another commitment to this necessary objective.

This new Policy takes a comprehensive approach to sexual and gender-based crimes that may amount to the crime against humanity of persecution on the grounds of gender (gender persecution). It recognises all of its victims, namely women, girls, men, boys, including/and LGBTQI+ persons. It also recognises that acts or crimes of gender persecution may include, but are not always manifested as, forms of sexual violence or any physical violence or physical contact. They may include psychological abuse. They may also take forms other than physical injury to persons, including acts such as cultural destruction or confiscation and prohibition of education for girls.

Accountability for gender persecution crimes can help to disrupt the normalisation of institutionalised gender discrimination and violence. By promulgating this Policy, my Office signals its commitment to ensuring that in all our future cases we properly reflect the specific facts and evidence. We will do this by charging gender persecution and persecution on any other ground where it exists. To this end, I will ensure that this Policy is effectively implemented.

I am particularly grateful to Professor Lisa Davis, my Special Adviser on Gender Persecution who led the drafting of this Policy at my request. Complementing and building on the 2014 Policy Paper on Sexual and Gender-Based Crimes, this new Policy will help to further promote accountability, transparency, and predictability in the Office’s work in this crucial area. The Office has already taken steps in this direction, first confirming the charge of persecution on grounds of gender (and religion) in the case of Prosecutor v Al Hassan.

It was vital for me that the Policy be informed by the voices of staff and external actors, especially those with valuable experience addressing gender-based violence. Critically, we sought to ensure the voices of the victims of such crimes are reflected in our new approach. Taking direction from my initiative to strengthen engagement with civil society, the Policy was developed through an extensive year-long consultative process, engaging staff, civil society and affected communities. I want to thank the more than 500 organisations, institutions, States, UN experts, independent experts, activists, survivors, scholars, and academics, representing over 100 countries and territories who provided input. Their comments signal the importance of developing this Policy.

I am positive that this new approach will allow my Office to increase transparency, clarity, and predictability in the application of the legal framework. I look forward to taking the next necessary steps to expand cooperation, broaden accountability for gender persecution, and enhance the Rome Statute’s preventive impact in relation to gender crimes.