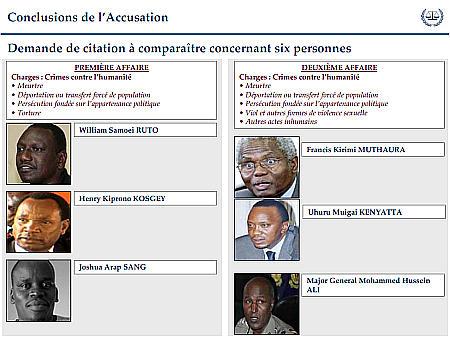 The Prosecutor has concluded there are reasonable grounds to believe crimes against humanity were committed, in the first Prosecution case, by:

1. William Samoei Ruto - currently: Minister of Higher Education, Science and Technology (suspended), MP for Eldoret North and during the PEV, MP for Eldoret North. The Prosecution considers that he was one of the principal planners and organizers of crimes against PNU supporters;

2. Henry Kiprono Kosgey - currently: Minister of Industrialization, MP for Tinderet Constituency, ODM Chairman and during the PEV: MP for Tinderet. The Prosecution considers that he was one of the principal planners and organizers of crimes against PNU supporters; and

3. Joshua Arap Sang - currently Head of Operations, KASS FM and during the PEV: Radio broadcaster. The Prosecution considers that he was one of the principal planners and organizers of crimes against PNU supporters.

And in the second Prosecution case, by:

4. Francis Kirimi Muthaura - during the PEV and to date: Head of the Public Service and Secretary to the Cabinet and Chairman of the National Security Advisory Committee. The Prosecution considers that he authorized the Police to use excessive force against ODM supporters and to facilitate attacks against ODM supporters.

5. Uhuru Muigai Kenyatta - currently: Deputy Prime Minister and Minister of Finance. The Prosecution considers that during the PEV he helped to mobilize the Mungiki criminal organization to attack ODM supporters; and

“The post election period of 2007-2008 was one of the most violent periods of the nation’s history,” said the Prosecutor.

The post election attacks left more than 1, 100 people dead, 3,500 injured and up to 600, 000 forcibly displaced. During 60 days of violence, there were hundreds of rapes, possibly more, and over 100, 000 properties were destroyed in six of Kenya’s eight provinces.

“These were not just crimes against innocent Kenyans”, said Prosecutor Moreno-Ocampo. “They were crimes against humanity as a whole. By breaking the cycle of impunity for massive crimes, victims and their families can have justice. And Kenyans can pave the way to peaceful elections in 2012.”

The judges of Pre-Trial Chamber II will now review the evidence. If they determine that there are reasonable grounds to believe that the six persons named committed the alleged crimes, they will decide on the most appropriate way to ensure their appearance in Court. The Prosecution has requested Summonses to Appear.

Summary of the Application

1. As early as December 2006, WILLIAM SAMOEI RUTO (“RUTO”) and HENRY KIPRONO KOSGEY (“KOSGEY”), prominent leaders of the Orange Democratic Movement (“ODM”) political party, began preparing a criminal plan to attack those identified as supporters of the Party of National Unity (“PNU”).[1] JOSHUA ARAP SANG (“SANG”), a prominent ODM supporter, was a crucial part of the plan, using his radio program to collect supporters and provide signals to members of the plan on when and where to attack. RUTO, KOSGEY and SANG coordinated a series of actors and institutions to establish a network, using it to implement an organizational policy to commit crimes. Their two goals were: (1) gain power in the Rift Valley Province, (“Rift Valley”) and in Kenya Central Government, (2) punish and expel from the Rift Valley those perceived to support PNU (collectively referred to as “PNU supporters”).

2. Kenyans voted in the presidential election on 27 December 2007. On 30 December 2007, the Electoral Commission of Kenya declared that Mwai Kibaki, presidential candidate for the PNU had won the election. The announcement triggered one of the most violent periods in Kenya’s history. The Prosecution will present some of the incidents, identifying those who are most responsible.

3. Thousands of members of the network (“perpetrators”) cultivated by RUTO, KOSGEY and SANG began to execute their plan by attacking PNU supporters immediately after the announcement of the presidential election results on 30 December 2007. On 30-31 December 2007, they began attacks in target locations including Turbo town, the greater Eldoret area (Huruma, Kimumu, Langas, and Yamumbi), Kapsabet town, and Nandi Hills town. They approached each location from all directions, burning down PNU supporters’ homes and businesses, killing civilians, and systematically driving them from their homes. On 1 January 2008, the church located on the Kiambaa farm cooperative was attacked and burned with more than hundred people inside. At least 17 people died. The brunt of the attacks continued into the first week of January 2008.

4. All identified attacks occurred in a uniform fashion. Perpetrators gathered at designated meeting points outside of locations selected for attack. There, they met Coordinators, who organized the perpetrators into groups with assigned tasks. Perpetrators then attacked target locations. Some perpetrators approached on foot, while others were driven or in trucks, previously arranged. SANG helped coordinate the attacks using coded language disseminated through radio broadcasts.

5. In response to RUTO, KOSGEY and SANG’s planned attacks on PNU supporters, as well as to deal with protests organized by the ODM, prominent PNU members and/or Government of Kenya officials Francis Kirimi MUTHAURA (“MUTHAURA”), Uhuru Muigai KENYATTA (“KENYATTA”), and Mohammed Hussein ALI (“ALI”) developed and executed a plan to attack perceived ODM supporters in order to keep the PNU in power.

6. First, under the authority of the National Security Advisory Committee, of which MUTHAURA and ALI were Chairman and a member, respectively, the Kenya Police in joint operations with the Administration Police (“Kenyan Police Forces”) were deployed into ODM strongholds where they used excessive force against civilian protesters in Kisumu (Kisumu District, Nyanza Province) and in Kibera (Kibera Division, Nairobi Province). As a consequence, between the end of December 2007 and the middle of January 2008, the Kenyan Police Forces indiscriminately shot at and killed more than a hundred ODM supporters in Kisumu and Kibera.

7. Second, MUTHAURA, KENYATTA and ALI also developed a different tactic to retaliate against the attacks on PNU supporters. On or about 3 January 2008, KENYATTA, as the focal point between the PNU and the criminal organization the Mungiki, facilitated a meeting with MUTHAURA, a senior Government of Kenya official, and Mungiki leaders to organize retaliatory attacks against civilian supporters of the ODM. Thereafter, MUTHAURA, in his capacity as Chairman of the National Security Advisory Committee (“NSAC”), telephoned ALI, his subordinate as head of the Kenya Police, and instructed ALI not to interfere with the movement of pro-PNU youth, including the Mungiki. KENYATTA additionally instructed the Mungiki leaders to attend a second meeting on the same day to finalize logistical and financial arrangements for the retaliatory attacks.

9. The violence resulted in more than 1,100 people dead, 3,500 injured, approximately 600,000 victims of forcible displacement, at least hundreds of victims of rape and sexual violence and more than 100,000 properties destroyed in six out of eight of Kenya’s provinces. Many women and girls perceived as supporting the ODM were raped.

[1] This is a coalition of parties including the Kenya African National Union (KANU), Ford-Kenya, Ford-People, Democratic Party and the National Alliance Party of Kenya.