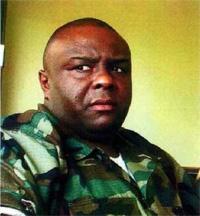 Jean-Pierre Bemba Gombo, alleged national of the Democratic Republic of Congo (DRC), about 45 years old, was arrested today by the Belgian authorities following a warrant of arrest issued under seal by the International Criminal Court.

Jean-Pierre Bemba Gombo, President and Commander in Chief of the Mouvement de libération du Congo (MLC), is alleged to be criminally responsible for four counts of war crimes and two counts of crimes against humanity committed on the territory of the Central African Republic from 25 October 2002 to 15 March 2003.

On 23 May 2008, Pre-Trial Chamber III issued a sealed warrant of arrest for Jean-Pierre Bemba Gombo. The warrant remained under seal until today.

Pre-Trial Chamber III found that there are reasonable grounds to believe that in the context of a protracted armed conflict in the Central African Republic from about 25 October 2002 to 15 March 2003, MLC forces led by Jean-Pierre Bemba Gombo carried out a widespread or systematic attack against a civilian population during which rape, torture, outrages upon personal dignity and pillaging were committed in, but not limited to, the localities of PK 12, Bossongoa and Mongoumba.

Pre-Trial Chamber III also found that there are reasonable grounds to believe that Jean-Pierre Bemba Gombo, as President and Commander in Chief of the MLC, was vested with de facto and de jure authority by the members of the MLC to take all political and military decisions.

According to the warrant of arrest for Jean-Pierre Bemba Gombo, he is criminally responsible, jointly with another person or through other persons, within the meaning of article 25(3)(a) of the Rome Statute of the International Criminal Court, on:

On 21 December 2004, the Central African Republic, which is a State Party to the Rome Statute, referred the situation on its territory to the Prosecutor of the Court.

On 22 May 2007, following a thorough analysis of the information regarding alleged crimes, the Prosecutor announced his decision to initiate an investigation in the Central African Republic.

The warrant of arrest for Jean-Pierre Bemba Gombo is the first warrant issued in the situation in the Central African Republic.

The International Criminal Court is an independent, permanent court that tries persons accused of the most serious crimes of concern to the international community as a whole, namely the crime of genocide, crimes against humanity and war crimes.