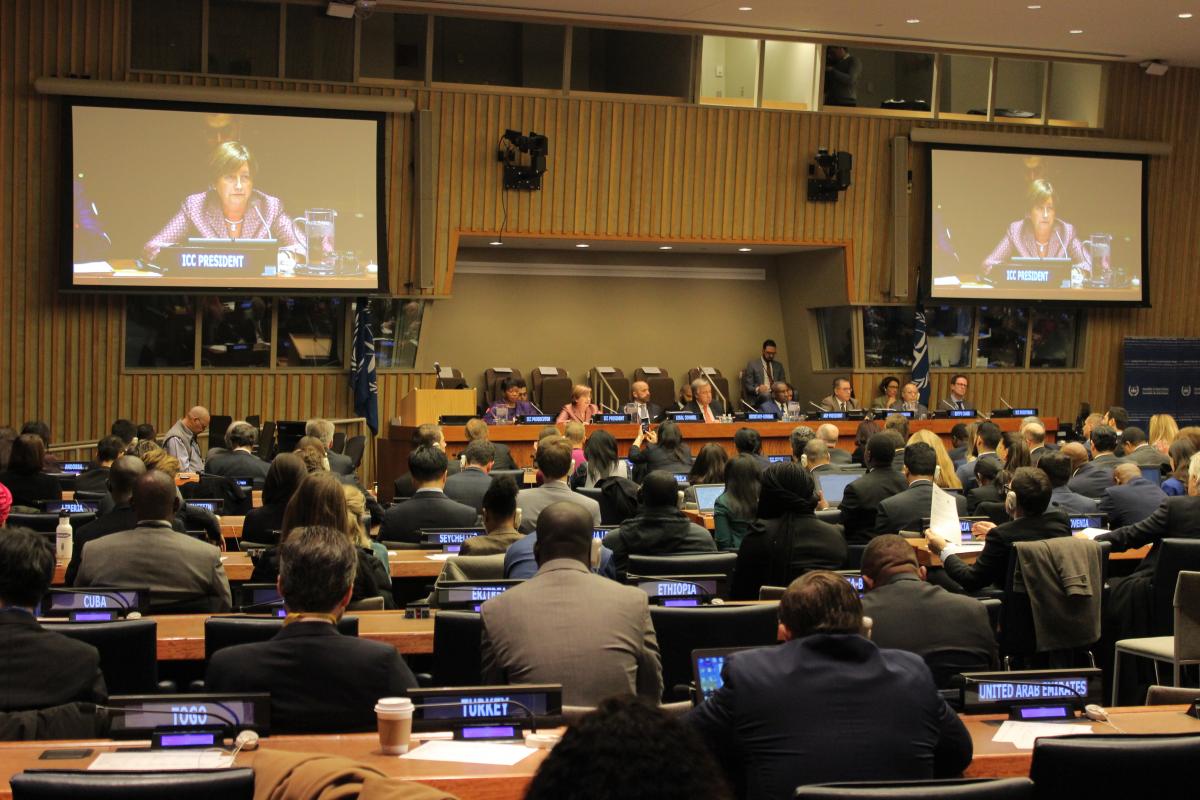 Today, 4 December 2017, the President and the Prosecutor of the International Criminal Court ("ICC" or "Court") presented the Court's annual report on activities to the Assembly of States Parties to the Rome Statute ("ASP" or "Assembly") at the opening of its 16th session, to be held from the 4th to the 14th of December 2017 at the United Nations Headquarters in New York (USA).

ICC President Judge Silvia Fernández de Gurmendi informed the Assembly that the Court had a busy year behind it, with important judicial developments at all phases of proceedings. The Court has stepped up its outreach to victims and affected communities to ensure sufficient understanding of and access to proceedings. "Participation and reparations to victims are central aspects of the Rome System", she said and emphasised the role of the Trust Fund for Victims.

Referring to efforts to enhance the Court's efficiency, the President stated: "concrete reforms put in place are already having a visible impact in our courtrooms and cases, including a drastic reduction of the time required for some phases or aspects of proceedings," adding that "the enhancement of the Court´s performance is work in progress that must continue as new lessons are drawn from additional experience."

She also informed the Assembly about the steps taken through inter-organ collaboration to strengthen safeguards to ensure that officials and staff members of the Court uphold the highest standards of integrity and professionalism in the exercise of their functions, including a mapping of the relevant legal provisions and codes of ethics in order to consider further measures.

Concluding her remarks, President Fernández underlined that the Court needs the support of States, international and regional organisations, as well as civil society for its work. "At a time when serious pushback appears to challenge the achievements already made to enhance accountability, the firm and sustained commitment of the international community is crucial for the Court to effectively fulfil its mandate", she said.

The Prosecutor of the Court, Mrs Fatou Bensouda, provided a tour d'horizon of her Office's activities, including developments in cases prosecuted at the Court as well as policy work undertaken by her Office. She also touched upon preliminary examinations activities as detailed in her Office's latest report.  In this context, she highlighted her recent request seeking authorisation from the Court's Pre-Trial Chamber to proceed with an investigation into the situation in the Islamic Republic Afghanistan, as well as the new investigation opened concerning the situation in Burundi.  In her remarks, Prosecutor Bensouda stressed that these developments alone demonstrate, once again, her resolve and that of her Office to independently and impartially apply the Rome Statute, while fully attuned to the challenges and complexities of these situations.  She emphasised the importance of full support and cooperation of the Court's States Parties, stating that "closing the impunity gap for Rome Statute crimes and, by so doing, promoting the international rule of law are both a necessary goal and a joint responsibility."

In her address to the Assembly, the Prosecutor concluded by recalling the upcoming 20th anniversary of the Rome Statute as a symbolic moment which must be seized to recommit to the fight against impunity for the worst crimes of concern to the international community. "What is required, today more than ever, is greater recognition of the need to strengthen the Court and the evolving system of international criminal justice.  It is up to States Parties, first and foremost, as custodians of the Rome Statute, to stand firmly by its values and further foster its positive impact in practice" she stated.

The ICC, governed by the Rome Statute, is the world's first permanent, treaty-based, international criminal court established to help end impunity for the perpetrators of the most serious crimes of concern to the international community, namely crimes against humanity, war crimes and genocide, and potentially, the crime of aggression in the future. In accordance with article 112 of the Rome Statute, the Assembly is the management oversight and legislative body of the ICC. It is composed of representatives of the States that have ratified and acceded to the Rome Statute. To date, the ICC benefits from the membership of 123 States Parties.

Report on the Activities of the International Criminal Court