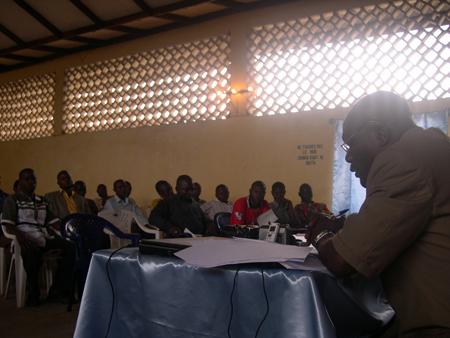 Celebration of the Day of International Criminal Justice in Bunia

Since the ICC’s jurisdiction is complementary to that of national courts, familiarity with those courts is vital in the fight against impunity for international crimes. In the Democratic Republic of the Congo, it is the military courts that currently have jurisdiction over international crimes. Judge Innocent Mayembe, President of the Bunia Garrison Court and Ndes Anzim, Public Prosecutor at the Bunia Tribunal de Grande Instance, spoke to the journalists on three topics: “The History of International Criminal Justice”, “The Structure of the Military Court System” and “The Structure of the Civil Court System”.

The ICC’s representative also informed participants about the latest developments in the various ongoing cases, with particular emphasis on the case against Thomas Lubanga Dyilo. In relation to this case, numerous questions were asked about the time limits for the appeals judges to rule on appeals and on the future course of the proceedings. Lastly, the Coordinator of the national Coalition for the ICC (CCPI) introduced his organisation.