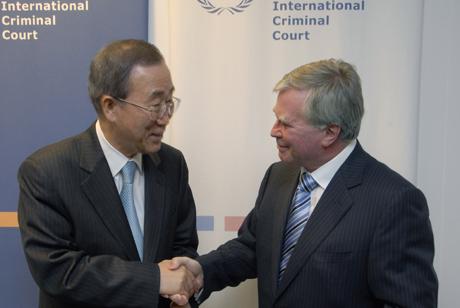 The two delegations discussed issues pertaining to the relationship between the UN and the ICC. During the meeting, President Kirsch and Prosecutor Moreno-Ocampo informed the Secretary-General of the activities of the Court and of the Office of the Prosecutor respectively.

President Kirsch thanked the Secretary-General for the sustained support of the UN to the ICC and emphasized the importance of continued cooperation, stating that “Though the ICC is independent from the UN, the two institutions operate in a context of interdependence.”

The Prosecutor of the Court, Mr. Luis Moreno Ocampo, expressed his appreciation for the UN's cooperation and support. He also stressed the need to work together to promote the message that ending impunity will bring lasting peace and stability.

The ICC is an independent international organisation. The ICC was brought into relationship with the UN through an agreement concluded in October 2004.  The ICC and the UN cooperate in many different areas including the exchange of information and logistical support.  The ICC reports annually on its activities to the UN.

For further information please contact Ms Sonia Robla, Head of Public Information and Documentation Section at +31 (0)70 515-8089 or at [email protected]