Skip to main content
ICC Prosecutor, Fatou Bensouda, launches Policy on Children: “We must strengthen our resolve to end impunity for atrocity crimes against and affecting children”

ICC Prosecutor, Fatou Bensouda, launches Policy on Children: “We must strengthen our resolve to end impunity for atrocity crimes against and affecting children” 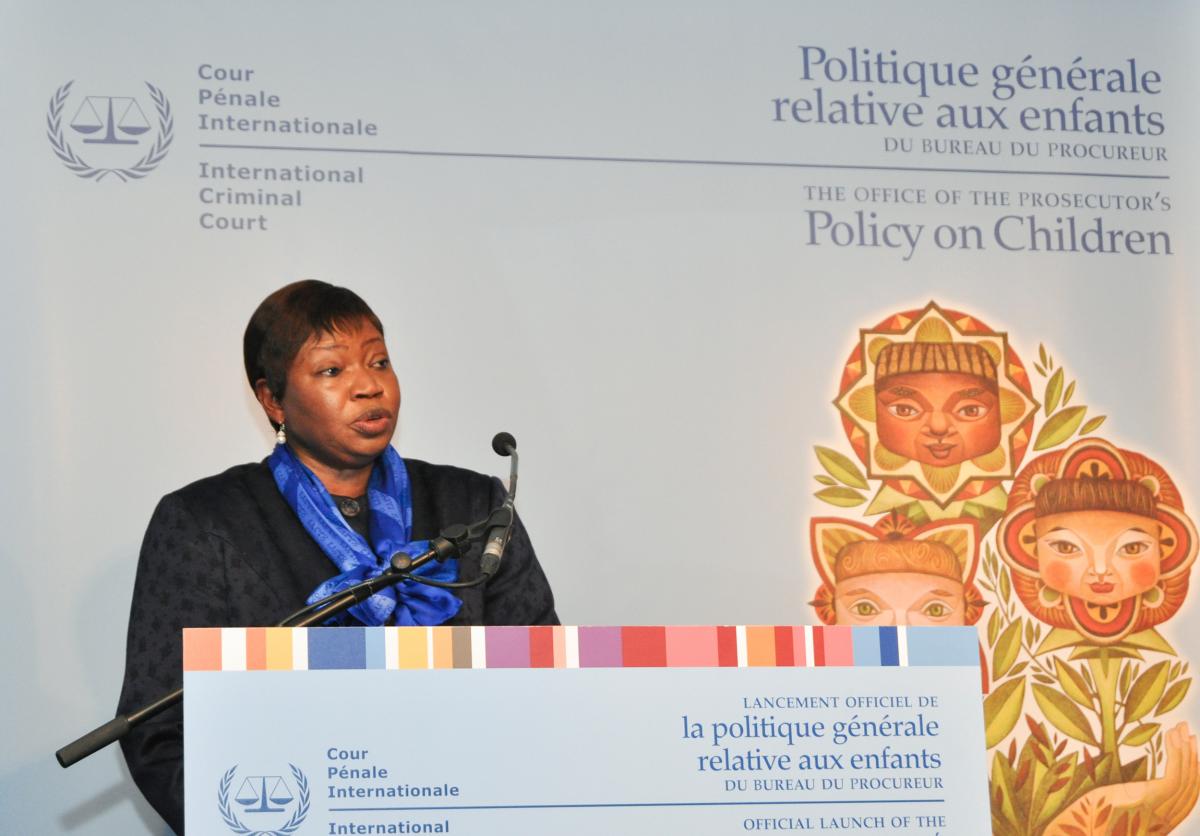 The Prosecutor of the International Criminal Court ("ICC" or the "Court'), Mrs. Fatou Bensouda, has officially launched her Office's Policy on Children at a major event organised in the Hague on the first day of the fifteenth session of the Assembly of States Parties to the Rome Statute.

At the launch, which was attended by high-level representatives of the United Nations, the diplomatic community including at the ministerial level, civil society, academia and media, Prosecutor Bensouda stressed the need for all relevant actors to work together to combat atrocity crimes against or otherwise affecting children.  "We must send a firm and consistent message that humanity stands united in its resolve that such crimes will not be tolerated and that their perpetrators will not go unpunished. Only with collective action can we truly make a difference," she stated.

The Policy highlights the severity of atrocity crimes against and affecting children and will assist the Office of the Prosecutor ("Office") in its efforts to robustly address these crimes in accordance with the Rome Statute.  An important feature of the Policy is that it further reinforces the Office's child-sensitive approach, one that is respectful of the rights of children as recognised in the Convention on the Rights of the Child (1989). It will thus guide the Office in its efforts to hold accountable perpetrators of international crimes against children, bearing in mind their rights and best interests.  The Policy is the product of extensive expert consultations and informed by the insights of children themselves, the primary beneficiaries of this initiative.

The first case before the ICC - The Prosecutor v. Thomas Lubanga Dyilo - concentrated on the recruitment and use of children to participate actively in hostilities. The 2012 guilty verdict rendered by the Court was a landmark decision, highlighting the need to take urgent and concerted action.

In its attempts to do so, the Prosecutor has elevated the investigation and prosecution of atrocity crimes against children to one of the key strategic goals of the Office.  "A crime against a child is an offence against all of humanity; it is an affront to our basic tenets of human decency.  Children are our greatest resource, and must be protected from harm so as to reach their full potential.  We, at the ICC, intend to play our part through the legal framework of the Rome Statute", Prosecutor Bensouda stated at the official launch of the Policy event.  In calling for a global response to address atrocity crimes against children, she emphasised that: "it is for each and every one of us to assume our responsibility and take concrete steps to end impunity for these crimes."

The official launch was made possible by the generous sponsorship and support of the Ministry of Foreign Affairs and Worship of the Argentine Republic, the Government of Costa Rica, the Ministry for Foreign Affairs of Finland, the Ministry of Justice of Korea, the Office of Special Representative of the UN Secretary-General for Children and Armed Conflict, The Romeo Dallaire Child Soldiers Initiative, KidsRights, WatchList on Children and Armed Conflict, and the Institute for 21st Century Questions.

The Policy on Children is available in five languages: Arabic, English, French, Spanish and Swahili.

The Office of the Prosecutor of the ICC conducts independent and impartial preliminary examinations, investigations and prosecution of the crimes of genocide, crimes against humanity and war crimes. The Office has been conducting investigations in: Uganda, the Democratic Republic of the Congo, Darfur, Sudan, the Central African Republic (two separate investigations), Kenya, Libya, Côte d'Ivoire, Mali and Georgia. The Office is also conducting preliminary examinations relating to the situations in Afghanistan, Burundi, the registered vessels of Comoros, Greece and Cambodia, Colombia, Gabon, Guinea, Iraq/UK, Palestine, Nigeria and Ukraine.