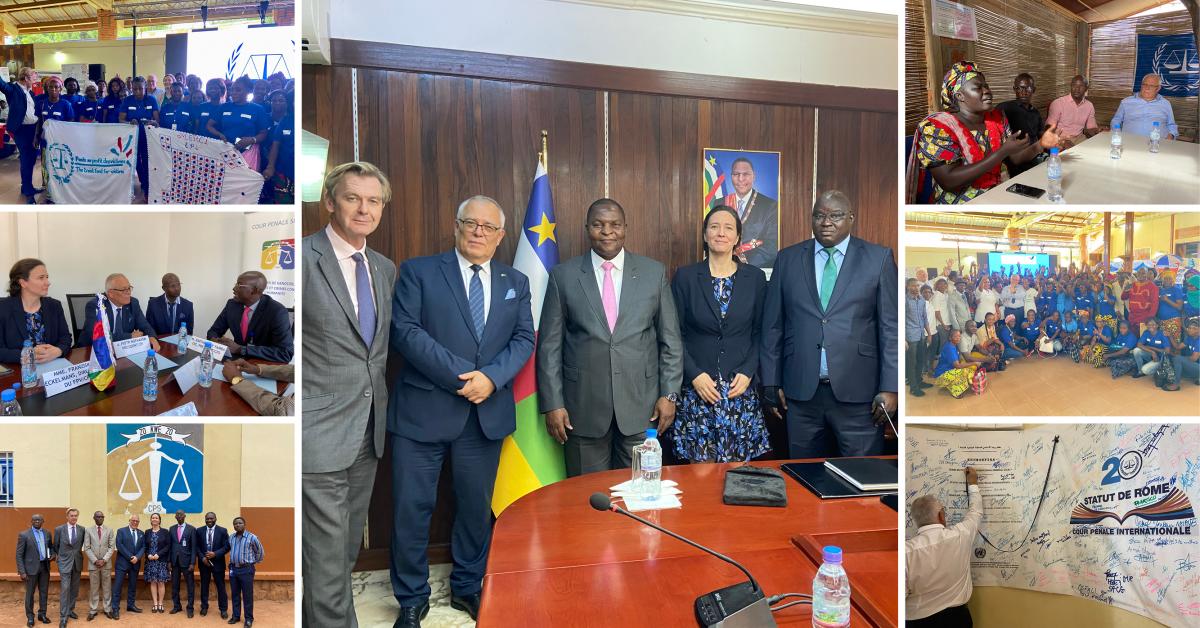 From 22 to 26 November 2022, the President of the International Criminal Court (“ICC” or “the Court”), Judge Piotr Hofmański, and the Acting Executive Director of the Trust Fund for Victims (TFV) at the ICC, Ms. Franziska Eckelmans, paid an official visit to the Central African Republic (CAR) to witness first-hand the Court’s work on the ground, including the assistance programme of the TFV aimed at redressing harm suffered by victims of Rome Statute crimes in situations before the ICC as well as to engage with the authorities and stakeholders in the country.

President Hofmański and his delegation met with the President of the Central African Republic, H.E. Faustin-Archange Touadéra, and the Minister of Justice, Arnaud Djoubaye-Abazene, to thank them for the many important forms of assistance that CAR authorities have provided to the ICC in relation to the Court’s operations, and to discuss future collaboration in the fight against impunity. President Touadéra and Minister Djoubaye-Abazene assured President Hofmański of the CAR’s full commitment to cooperation with the Court.

President Hofmański also visited the Special Criminal Court (SCC), a hybrid judicial institution created under CAR law, comprising national and international officials, with a mandate to investigate, prosecute and adjudicate grave breaches of international criminal and humanitarian law committed in the Central African Republic since 2003. The ICC President held a detailed conversation with the SCC’s Acting President, Chief Prosecutor, Chief Registrar and Deputy Chief Registrar, during which he reaffirmed the ICC’s strong support for the SCC’s efforts in the fight against impunity in line with the principle of complementarity enshrined in the ICC’s Statute, according to which national courts have primacy. Prospects for expanding the good cooperation between the two courts were discussed during the meeting. “If the ICC, the SCC and the national authorities of CAR can work together, we can move closer to achieving the objective of the Rome Statute, which is to close the gap of impunity,” the President said.

Apart from national stakeholders, the ICC President and the Acting TFV Executive Director also met with representatives of the diplomatic corps based in Bangui, including constructive bilateral meetings with the Ambassador of the African Union and the Ambassador of Chad.

A major part of the visit was devoted to the assistance programme of the TFV aimed at redressing harm suffered foremost by victims, women and men, of sexual and gender-based violence with a focus on those of the 2002-2003 conflict. Since 2020/2021, more than 6,000 victims have had access to physical, psycho-social, psychological and socio-economic rehabilitation measures through TFV implementing partners, Association des Femmes Juristes de Centrafrique, Comité Inter Africain pour les Femmes de Centrafrique, DanChurchAid, Médecins d'Afrique and Mukwege Foundation.

President Hofmański and Ms Eckelmans held conversations with representatives of the implementing partners in the projects under way in different prefectures of CAR and listened to the accounts of survivors on what they had endured and the transformative effect of the assistance projects they are benefitting from. “I am impressed by the activities of local organisations and touched by the stories I have heard. I assure you that victims are at the heart of the ICC's mandate. You have our support and we are proud of the work carried out by the Trust Fund for Victims with its partners”, President Hofmański said in relation to this event, which was also attended by CAR government officials, officials of the CPS and various representatives of international and national and non-governmental organisations located in CAR, who engaged with TFV partners and beneficiaries and experienced the transformative character of reparations and their important role for justice and stability.

The acting TFV Executive Director said: “The beneficiaries we heard are indeed ‘walombe’ – champions, as they refer to themselves. Together with the TFV partners, they have demonstrated what transformative reparations are and the processes, staff and time required to achieve such transformation. We will take the beneficiaries’ calls for an increased engagement by the TFV to the donors and plead for funds to continue and extend the programme in CAR.”

President Hofmański also held a session of frank dialogue with “ambassadors of justice”, who are community leaders that work together with the ICC’s Public Information and Outreach Programme with a view to disseminating information and raising awareness of the Court’s work around the country. With the support of Canada and UK, some of the ambassadors of justice have visited the ICC in The Hague to watch CAR related trials first hand and to meet with Court officials, and others are scheduled to do so next year. “Understanding of the local communities comes from local stakeholders and leaders like the ambassadors of justice, who have good knowledge and access to the affected communities, thus playing a key role for the ICC in terms of outreach”, said President Hofmański.

At the various meetings, views were exchanged on the issue of reparative justice and reparations in CAR, given the Truth, Justice, Reparation and Reconciliation Commission (CVJRR) of CAR has the opportunity to establish a framework for a trust fund for reparations, and given reparations are a live issue before the SCC. To share its expertise in this area, the TFV organised a hybrid roundtable together with representatives of the CVJRR, CPS, the Global Survivor’s Fund (GSF) and representatives of governments and international organizations, which allowed for an in-depth exchange on the subject: “A coordinated and streamlined approach to reparations is essential because reparations are a right of victims. Given the institutional and legal conditions for reparations have already been established in CAR, we have a real opportunity in this country to move together in this direction”, Acting TFV Executive Director said.

During their stay in CAR capital Bangui, President Hofmański and Ms Eckelmans engaged extensively with the staff of the ICC Country Office in CAR, which houses international as well as local staff performing crucial functions such as the protection and support of witnesses, outreach to victims and affected communities, and oversight of TFV projects. President Hofmański expressed the gratitude of the Court’s senior management for the hard work of the country office staff, often in difficult circumstances, and held long conversations with them to fully appreciate the challenges they face.

Background: The situation in the CAR was referred to the ICC by the CAR government in December 2004. The Prosecutor opened an investigation in May 2007. On 30 May 2014, the Prosecutor received a second referral from the CAR authorities regarding alleged crimes in CAR since 1 August 2012. On 24 September 2014, the Prosecutor opened a second investigation in CAR regarding crimes allegedly committed since 2012. Two of the four trials currently ongoing before the ICC – in the Yekatom and Ngaïssona case, and in the Said case - concern crimes allegedly committed in the Central African Republic. Another case in this situation, regarding Maxime Jeoffroy Eli Mokom Gawaka, is at the pre-trial stage, and an ICC arrest warrant against Mahamat Nouradine Adam is outstanding.