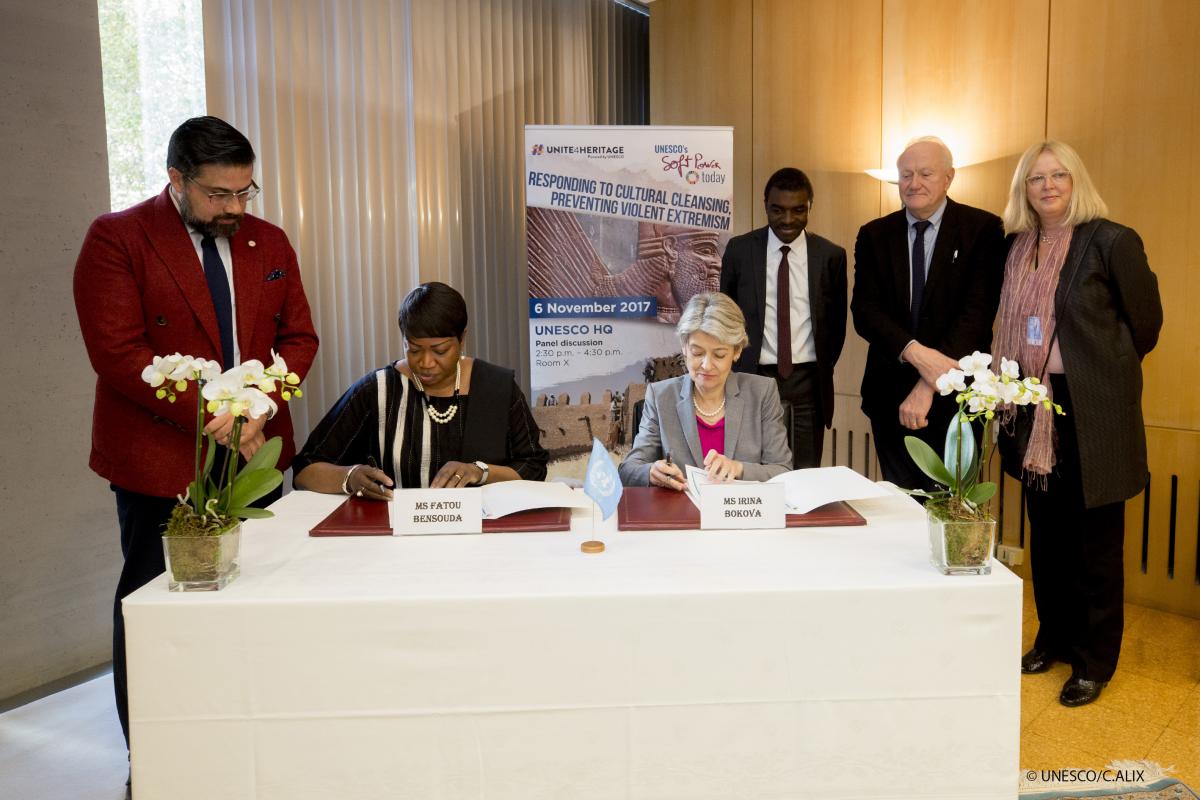 Paris, France - Recognising the importance of protecting cultural heritage from attack in time of conflict, Irina Bokova, Director-General of UNESCO, and Fatou Bensouda, Prosecutor of the International Criminal Court ("ICC" or the "Court"), today signed a Letter of Intent by which UNESCO and the ICC Office of the Prosecutor will formalise and further enhance their collaboration, in line with their respective mandates.

The signing of the Letter of Intent took place in the margins of an international high-level panel on "Responding to Cultural Cleansing, Preventing Violent Extremism" convened at UNESCO Headquarters, in which both Mrs Bokova and Prosecutor Bensouda participated.

"The deliberate destruction of cultural heritage not only affects peoples' historical identity but fuels sectarian violence and hampers post-conflict recovery and peace building. UNESCO and the ICC must strengthen their cooperation for the protection of cultural property in armed conflicts, as this is a humanitarian and security imperative", stated Mrs Bokova.

Praising UNESCO for its crucial work, Prosecutor Bensouda emphasised that more can be done going forward, adding that "an effective strategy to address the destruction of cultural heritage requires a multi-faceted and collaborative approach.  UNESCO is a natural partner for my Office and, the ICC more broadly, in confronting the scourge of attacks against cultural heritage, within the Rome Statute framework. This Letter of Intent is a recognition of that important relationship and paves the way for continued cooperation."  She added: "cultural heritage is the embodiment of the continuity of the human story, a celebration of our commonality and the richness of our diversity.  We all have a duty to protect cultural heritage. With close collaboration with UNESCO, we hope to make a difference."

The recent historic ruling of the ICC in the case of the destruction of shrines and mausoleums in Timbuktu (Mali), the first of its kind before the Court, sent a clear signal that intentional targeting of cultural heritage is a serious crime that causes significant suffering to those immediately affected and beyond, and should not go unpunished. In its subsequent Reparation Order, moreover, the Court established that the victims of such crimes were entitled to compensation and issued a Reparation Order.

The importance of prosecuting those responsible for war crimes against cultural heritage was echoed in the ground-breaking UN Security Council Resolution 2347, adopted in March 2017, the first ever to condemn the unlawful destruction of cultural heritage.  These unprecedented developments have led over the past years to frequent exchanges and collaboration between UNESCO and the ICC Office of the Prosecutor, based on the convergence of similar aims within their respective independent mandates.

As attacks against culture have regrettably become more frequent, the need for a stronger and more articulated framework of cooperation has become apparent.  In addition to expertise UNESCO has provided in the context of the Al Mahdi case, cooperation has also been at the non-operational level, for example through participation in the ICC Office of the Prosecutor's new policy initiative on cultural heritage, which is scheduled for finalisation and adoption in 2018.  The Letter of Intent signed today builds on these efforts, further solidifying the existing relationship, with a view to establishing a comprehensive cooperation agreement in the near future.

Joint Communiqué of the ICC Office of the Prosecutor with UNESCO