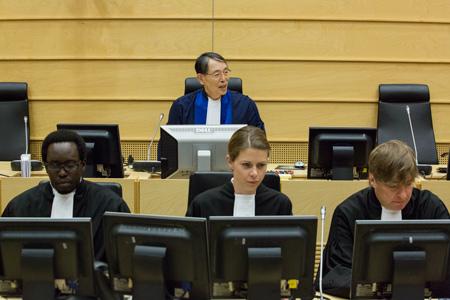 Today, 3 March 2015, the Appeals Chamber of the International Criminal Court (ICC) delivered, in open court, its judgment rejecting Abdallah Banda's appeal against Trial Chamber IV's decision replacing the summons to appear by a warrant of arrest.

Today, Judge Sang-Hyun Song, Presiding Judge in this appeal, read a summary of the Appeals Chamber judgment and explained that the issue on appeal was not the issuance of the arrest warrant itself but the question of whether the Trial Chamber should have provided Mr Banda with a further opportunity to present submissions on the appropriateness of replacing the summons to appear with a warrant of arrest after being satisfied that Mr Banda would not appear voluntarily for his trial.

The Appeals Chamber noted that Mr Banda had not demonstrated that, in the absence of the alleged error, the Trial Chamber decision would have substantially differed from the one rendered. Furthermore, Mr Banda had not put forth any legal argument in support of the contention that the procedural step of inviting further submissions was required as a matter of law. The Appeals Chamber also noted that the Trial Chamber's decision left open the possibility to "revisit […] the conditions of [Mr Banda's] stay in The Netherlands during trial" in the case of his voluntary appearance after the issuance of the warrant of arrest. For these reasons, the Appeals Chamber deemed it appropriate to confirm the Trial Chamber's decision.

Background: On 11 September 2014, Trial Chamber IV issued an arrest warrant against Abdallah Banda Abakaer Nourain. The Chamber also vacated the trial date - previously scheduled for 18 November 2014 - and directed the ICC Registry to transmit the new requests for arrest and surrender to any State, including the Sudan, on whose territory Mr Banda may be found.

Trial Chamber IV had requested the Government of Sudan's cooperation to facilitate the accused's presence at trial. This cooperation, according to the information provided by the Registry, is not forthcoming. By way of consequence, the Chamber considered that there are no guarantees that, in the current circumstances, he will be in an objective position to appear voluntarily, regardless of whether he wishes to be present at trial or not. The Chamber concluded that an arrest warrant is now necessary to ensure the accused's presence.

Abdallah Banda faces three charges of war crimes (violence to life in the form of murder, whether committed or attempted; intentionally directing attacks against personnel, installations, material, units or vehicles involved in a peacekeeping mission; and pillaging). These crimes were allegedly committed in an attack carried out on 29 September 2007, against African Union Peacekeeping Mission in Sudan, at the Haskanita Military Group Site, in the Umm Kadada locality of North Darfur, Sudan. While the case initially involved Saleh Mohammed Jerbo Jamus, Trial Chamber IV terminated the proceedings against him on 4 October 2013, upon receiving evidence pointing towards his death.