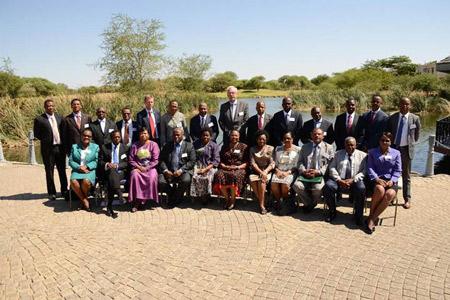 On 29 and 30 October 2015, a High-level Regional Seminar was held in Gaborone, Botswana with the participation of government representatives from Angola, Botswana, Comoros, Lesotho, Madagascar, Malawi, Mozambique, Namibia, Seychelles, and Zambia, along with regional experts from the United Nations Office on Drugs and Crime and the Southern Africa Litigation Center, and with officials and representatives of the International Criminal Court (ICC).  The theme of the seminar was on cooperation between the ICC and States, as well as the connection between cooperation and regional and national capacity building. The event was organised by the ICC in cooperation with the Government of the Republic of Botswana, and sponsored by the European Commission and the Governments of the Kingdom of the Netherlands and the Kingdom of Norway.

The ICC needs the cooperation of States to effectively investigate, prosecute and try perpetrators of mass atrocities. In particular, the facilitation of requests for judicial assistance, ensuring the arrest and surrender of ICC suspects, the freezing and seizure of assets, the relocation of witnesses, enforcement of sentences, and provisional release of detainees are critical forms of State cooperation. A broad consensus at the Seminar was that while there may be areas in which the dialogue and cooperation between the States and the ICC could be further enhanced, cooperation is a must and pivotal for the Court's functioning.

In her opening address, the Hon. Dr Pelonomi Venson-Moitoi, Minister of Foreign Affairs and International Cooperation of the Republic of Botswana, stressed that the Seminar provided the "necessary platform for an exchange of views in an open, frank and transparent manner" on issues pertaining to the ICC and the Rome Statute. She pointed out that the ICC "should be allowed to operate independently and without interference or intimidation". Minister Venson-Moitoi also recalled the important role that States Parties from Africa, as the largest regional bloc, play within the Rome Statute system and she urged the participating States to use this Seminar's platform to "strengthen relations between African States and the Court by engaging and identifying critical measures that will improve [African States'] communication channels with the Court". The Attorney General of Botswana, Dr Athaliah Molokomme, held that States Parties are the parents of the Court and that all sides have to work together towards a harmonious and effective relationship between the parents and their common child.

The Prosecutor of the ICC, Fatou Bensouda, saluted "Botswana's leading role in the promotion of the international rule of law, and in particular, its steadfast support for the ICC from its very inception to the present day." Prosecutor Bensouda stressed that "the Court and its States Parties must remain unwavering in our resolve to create a world that seeks justice for atrocity crimes. Fighting impunity for such serious crimes is our shared responsibility, and only through continuous engagement, discussion, and support can we achieve this necessary common goal."

Judge Sanji Mmasenono Monageng said that the ICC is "at the centre of an evolving, global paradigm of justice that States have created, in order to secure a safer and more just world for future generations." She added that "justice under the Rome Statute system can only thrive with the active support of States. Cooperation is a central pillar of this system – the ICC itself does not have enforcement powers. From investigations to enforcement, from arrest and transfer of suspects to witness protection, the ICC needs the cooperation and unwavering commitment of States Parties to do the job it has been assigned."

Closing officially the High-level Seminar in Gaborone, the Hon. Shaw Kgathi, Minister of Defence, Justice and Security of the Republic of Botswana, noted that during the two-day Seminar, the "delegates reaffirmed their countries' commitment to the ICC and the fight against impunity". He added that some of the main challenges include "inadequate legal and institutional frameworks at both regional and national levels", dispelling "misperceptions about the ICC, for example that it is targeting Africa", and lack of voluntary cooperation agreements with the Court. He concluded that there was a "general consensus that these challenges can only be resolved by the States Parties through dialogue and engagement with the International Criminal Court".