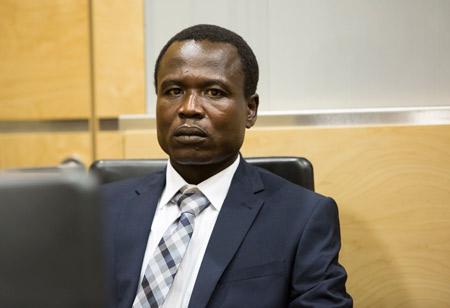 On 26 January 2015, Dominic Ongwen appeared before the Single Judge of Pre-Trial Chamber II of the International Criminal Court (ICC), Judge Ekaterina Trendafilova, at the seat of the ICC in The Hague (The Netherlands). The Single Judge provisionally set the date of the beginning of the confirmation of charges hearing in respect of Dominic Ongwen for 24 August 2015.

The hearing was held in the presence of the Prosecutor and the Defence. Dominic Ongwen was represented by his Duty Counsel, Hélène Cisse. The Single Judge verified the identity of the suspect, and ensured that he was clearly informed of the charges brought against him and of his rights under the Rome Statute of the ICC in a language he fully understands and speaks, Mr Ongwen's native Acholi.

The Chamber will soon issue a set of decisions regarding disclosure of evidence, redactions and victims' participation in the proceedings. The beginning of the confirmation of charges hearing was provisionally set for 24 August 2015.

Background: Dominic Ongwen was the alleged Brigade Commander of the Sinia Brigade of the Lord's Resistance Army (LRA). On 8 July 2005, ICC Judges issued an arrest warrant against Mr Ongwen for three counts of crimes against humanity (murder; enslavement; inhumane acts of inflicting serious bodily injury and suffering) and four counts of war crimes (murder; cruel treatment of civilians; intentionally directing an attack against a civilian population; pillaging) allegedly committed in 2004 within the context of the situation in Uganda.

Audio and video of the hearing:

Questions and answers on the Dominic Ongwen case