Skip to main content
To commemorate the Day of International Criminal Justice, the President of the Assembly convenes a regional discussion in Dakar on state sovereignty and international criminal justice

To commemorate the Day of International Criminal Justice, the President of the Assembly convenes a regional discussion in Dakar on state sovereignty and international criminal justice 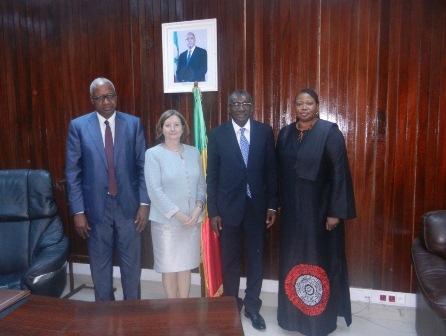 To commemorate the Day of International Criminal Justice, the President of the Assembly of States Parties, H.E. Mr. Sidiki Kaba, convened, on 20 and 21 July, a regional conference in Dakar on “Sovereignty of States and International Criminal Justice”. This conference was organized under the patronage of H.E. Mr. Macky Sall, President of the Republic of Senegal, and with support from the Government of The Netherlands and from the TrustAfrica foundation.

At the opening ceremony, the President of the Court, Judge Silvia Fernández de Gurmendi emphasized the utmost necessity of a system of international criminal justice to address the high cost of impunity for genocide, war crimes and crimes against humanity. “In this regard, national courts as well as the International Criminal Court have a crucial and complementary role to play. Effective deterrence of such crimes requires a credible expectation that the commission of such atrocities will be met by a robust, fair and predictable legal process. The road to justice may be long and arduous, but when the demands for justice are sufficiently strong, the obstacles can be overcome,” President Fernández stated.

The President of the Republic of Senegal H.E. Mr. Macky Sall with ICC Prosecutor Mrs. Fatou Bensouda at the Presidential Palace ©Senegal

In recalling the central role of the International Criminal Court within the system of international criminal justice, the Prosecutor of the Court, Mrs. Fatou Bensouda underscored that  “although many challenges still lie ahead, we must not deviate from our essential goal: to fight against impunity for the most heinous crimes, and to give a voice to the victims. To this end, at the Office of the Prosecutor, we continue to uphold our obligations in accordance with the Rome Statute to independently and impartiality investigate and prosecute those most responsible for atrocity crimes.”

During the second day of the conference, two panels, on complementarity and cooperation, facilitated by international experts, underscored the importance of strengthening domestic systems and cooperating with the Court to guarantee that there would be no impunity gap concerning the prosecution of the most serious crimes.

In closing the proceedings, Minister Sidiki Kaba stated the discussions held in Dakar reaffirmed there is no contradiction between sovereignty and international criminal justice: “The establishment of a permanent and effective international system of deterrence is the ultimate expression of sovereignty, and the impartial and fair prosecution of the most serious crimes under international law, be that at the international or national level, has the undeniable effect of reinforcing the power of the State and the rule of law”.

In parallel to the conference, more than 50 journalists from West, East and North Africa, participated in a training session led by staff from the Court, the Office of the President of the Assembly and experts from situation countries, to create a regional network of journalists committed to increasing public understanding of the mandate and operations of the Court.

During a press conference held in the margins of this event, Guinean Justice Minister H.E. Mr. Sako reiterated his appreciation for the cooperation between Guinea and the ICC’s Office of the Prosecutor, in relation to the domestic investigations concerning the crimes committed in the country on 28 September 2009.

On 20 July, the President of the Republic of Senegal, H.E. Macky Sall, received President Fernández and Prosecutor Bensouda respectively. In these meetings, President Sall reiterated his commitment to support the work of the ICC and to further strengthen dialogue between the Court and Africa.