Skip to main content
Central African Republic: The ICC organises a screening in Bangui of the first two days of the trial of Jean-Pierre Bemba Gombo

Central African Republic: The ICC organises a screening in Bangui of the first two days of the trial of Jean-Pierre Bemba Gombo 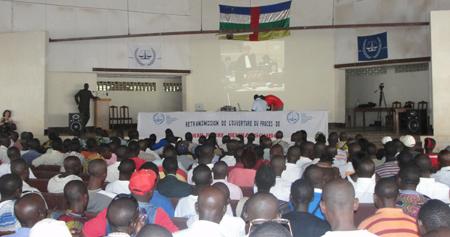 Audience following the opening of the Bemba trial in Bangui, the CAR ©ICC-CPI

The Field Outreach Unit of the International Criminal Court (ICC) screened the first two days of the trial of Jean-Pierre Bemba Gombo in Bangui, capital of the Central African Republic. The two-day viewing was held in the large hall of the CPJ (Protestant Youth Centre) in a working-class neighbourhood in the north of the capital.

The screening for the general public was publicised by announcements in the CAR media. In the days running up to the event, the press and radio stations conveyed the invitation to the local population to go to the CPJ and see the first images from the courtroom in The Hague. The broadcast was streamed from the ICC website with a 30-minute delay.

Over 1450 visitors were registered at the CPJ during the two days (738 on the first day and 721 on the second). Many journalists also attended – not only those based in the capital, but also others from the rest of the country – the Outreach Unit having made a particular effort to secure their attendance. In addition, many victims’ organisations, women’s associations and human rights advocates took up the Outreach Unit’s invitation to attend the event.

This two-day screening was a unique opportunity for the people of Bangui and the surrounding areas to familiarise themselves with the judicial proceedings before the International Criminal Court. The audience was particularly interested in the principles governing a fair trial and gained a better understanding of the protective measures available to Court witnesses.

Having watched all of the screenings over the two days, many participants asked the Outreach Unit to continue the broadcasts so that they could follow the hearings over subsequent days. The Outreach Unit wrapped up the event by presenting the communication strategy it had designed so that the people of the CAR can continue to follow the Jean-Pierre Bemba Gombo trial: weekly video summaries called “In the Courtroom” will be produced by the Court to keep the public updated on judicial developments in the Bemba trial. They will be broadcast both by the public television station and radio stations in Bangui and the rest of the country: those present in the CPJ were provided with the programme schedule. Lastly, the Outreach Unit emphasised that regular large-scale public meetings would be organised by the Court, not only in Bangui but also elsewhere in the country (Bimbo, Mongoumba, Damara, Sibut, Bossembele, Bossangoa, Bozoum), to screen audiovisual summaries of the trial of Jean-Pierre Bemba Gombo in the affected communities.