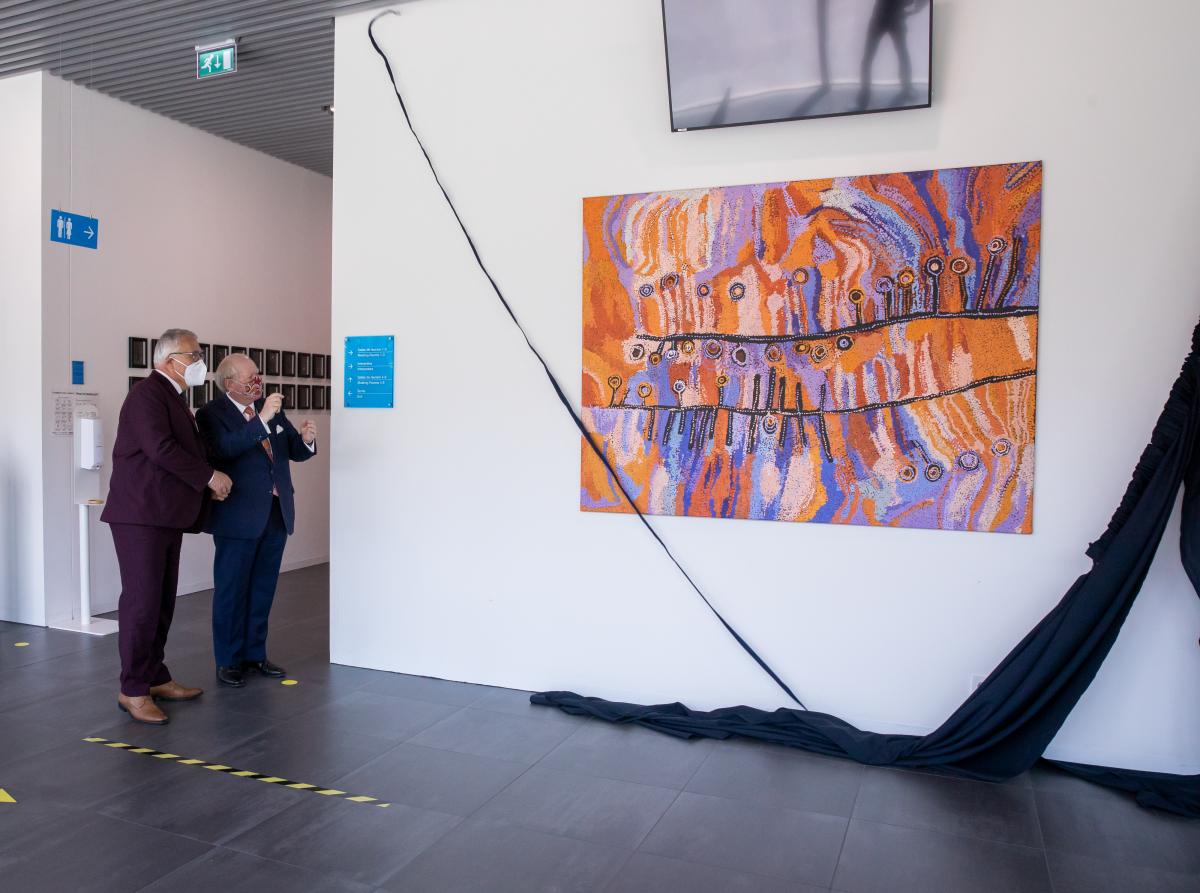 On 31 May 2021, H.E. Matthew E.K. Neuhaus, Ambassador of Australia to The Netherlands, and ICC President Judge Piotr Hofmański unveiled a new artwork donation to the International Criminal Court (ICC) in The Hague, the Netherlands. It was donated by Australia in the context of Australia's National Reconciliation Week.

The artwork is a painting titled Ngayuku Mamaku Ngura (My Father's Country), created in 2017 by Kunmanara – an Indigenous Australian artist and senior woman of law in her region. This work depicts an important law site near the remote community of Pipalyatjara, in South Australia.

"This painting and its story is about the transmission of knowledge and the law to the younger generations," H.E. Ambassador Matthew Neuhaus said in his remarks at the ceremony. "Today is an opportunity to showcase Australia's indigenous culture and art, as well as to highlight the importance of reconciliation and our recommitment to taking action on gender justice. We encourage international organisations, like the ICC, to adopt their own strategies that institutionalise an awareness of indigenous issues in their policymaking", the Ambassador added.

Expressing the Court's gratitude to the government of Australia for this donation, ICC President Judge Piotr Hofmański stated: "With its close connection to indigenous culture as well as gender aspects of the law, this painting will no doubt inspire many reflections on how to ensure the inclusiveness of the international criminal justice system, as we go forward. We are truly appreciative of such a thoughtful gift, which reflects Australia's longstanding support of the Court."

During the ceremony, held in the presence of the Executive Director of the Trust Fund for Victims Pieter de Baan, the Government of Australia also announced a pledge of AUD$ 300,000 to the Trust Fund, specifically earmarked to the Ntaganda case with a focus on survivors of sexual and gender-based violence.

Australia signed the Rome Statute – the Court's founding treaty – on 9 December 1998 and deposited its instrument of ratification on 1 July 2002. This donation highlights Australia's support to the Court and the joint efforts deployed in the fight against the impunity of those who perpetrate the most serious crimes that affect the international community as a whole.

Since the move to its new permanent premises in December 2015, the ICC received artwork donations from the Governments of Belgium, Canada, Cyprus, Denmark, Japan, Republic of Korea, Ireland, Liechtenstein, Mexico, The Netherlands, Portugal, Romania, Senegal, Slovenia, and Tunisia, representing their cultural heritage as well as reflecting the mandate of the Court.