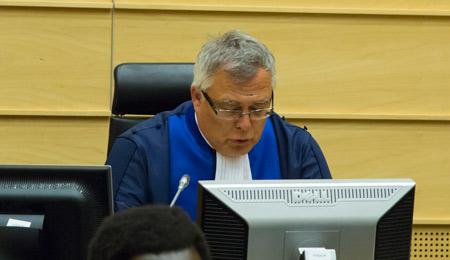 Today, 27 May 2015, the Appeals Chamber of the International Criminal Court (ICC) delivered its judgment by which it rejected the Republic of Côte d'Ivoire's appeal and confirmed the ICC Pre-Trial Chamber I's decision of 11 December 2014, which declared the case against Simone Gbagbo admissible before the Court.

On 30 September 2013, Côte d'Ivoire challenged the admissibility of the case against Simone Gbagbo, arguing that the same case was being prosecuted at the national level. On 11 December 2014, Pre-Trial Chamber I rejected Côte d'Ivoire's challenge and concluded that Côte d'Ivoire's domestic authorities were not taking tangible, concrete and progressive steps aimed at ascertaining whether Simone Gbagbo is criminally responsible for the same conduct alleged in the case before the Court. On 17 December 2014, Côte d'Ivoire appealed Pre-Trial Chamber I's decision.

Judge Piotr Hofmański, Presiding Judge in this appeal, delivered a summary of the judgment in open session. He indicated that the Appeals Chamber considered the two grounds of appeal that were raised by Côte d'Ivoire and concluded that they did not demonstrate any errors of fact or law in the Pre-Trial Chamber's decision.

The Appeals Chamber found no error in the Pre-Trial Chamber's assessment of the conduct underlying the crimes allegedly investigated domestically and concluded that the Pre-Trial Chamber did not apply overly rigorous criteria in determining that no relevant investigations or prosecutions were ongoing at the national level. The Appeals Chamber also noted that Côte d'Ivoire failed to demonstrate that it was unreasonable for the Pre-Trial Chamber to conclude that, on the basis of the available documentation, the factual parameters of the case or cases being investigated domestically were unclear. Furthermore, as regards the Pre-Trial Chamber's assessment of the nature of the crimes allegedly being investigated domestically, namely economic crimes and crimes against the State, the Appeals Chamber concluded that it was not unreasonable for the Chamber to find this conduct to be of a different nature to Ms Simone Gbagbo's conduct, as alleged before the ICC, in relation to the crimes against humanity of murder, rape and other forms of sexual violence, persecution and other inhumane acts.

The Appeals Chamber emphasised that its review was limited to the issue of the correctness of the Pre-Trial Chamber's decision, which determined the admissibility of the case as of the date of its issuance.

According to the Rome Statute, the ICC's founding treaty, a challenge to the admissibility of a case can be brought only once before the Court; however, "in exceptional circumstances, the Court may grant leave for a challenge to be brought more than once".

Background: On 29 February 2012, the judges issued a warrant of arrest under seal against Ms Gbagbo. The warrant of arrest was unsealed on 22 November 2012. According to the warrant of arrest, Ms Gbagbo is allegedly responsible, within the meaning of article 25(3)(a) of the Rome Statute, for the crimes against humanity of murder, rape and other forms of sexual violence,  other inhumane acts and persecution allegedly committed in the territory of Côte d'Ivoire during the period between 16 December 2010 and 12 April 2011. On 20 January 2015, the Appeals Chamber rejected the request for suspensive effect of the appeal against the Pre-Trial Chamber's decision of 11 December 2014, which had reminded Côte d'Ivoire of its obligation to surrender Simone Gbagbo to the Court without delay. The arrest warrant remains pending and Ms Gbagbo is not in the ICC's custody.