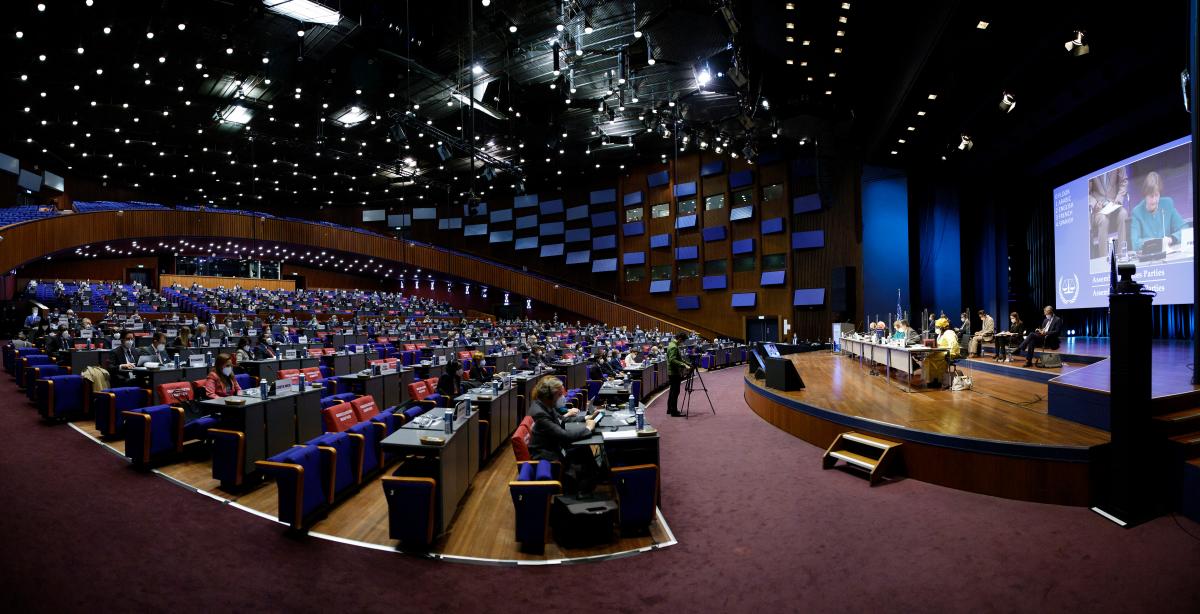 The twentieth session of the Assembly of States Parties (ASP) to the Rome Statute of the International Criminal Court (ICC) opened today, 6 December 2021, at the World Forum Convention Center in The Hague, The Netherlands. Due to the current COVID-19 restrictions, meetings will be held partly remotely.

From 6 to 11 December 2021, States Parties to the Rome Statute, the Court's founding treaty, observer States, invited States, international and regional organizations and representatives from civil society will discuss key challenges facing the Statute. States Parties will also make important decisions and adopt resolutions on key issues pertaining to the functioning of the Court and the Trust Fund for Victims, including in relation to their respective budgets, and on cooperation. They will also elect two Deputy Prosecutors, members of the Board of Directors of the Trust Fund for Victims, and members of the Advisory Committee on nominations of judges.

H.E. Silvia Fernández de Gurmendi, President of the Assembly of States Parties, highlighted the importance of the Court as a central piece of global justice. She stressed that for the Court to discharge its crucial mandate, it is necessary to review the Rome Statute system with a view to strengthening its functioning, increase cooperation and enhance universality.

Addressing the Assembly, the President of the ICC, Judge Piotr Hofmański said: "If I had to summarise in one sentence what I want to say today, it would be this: 'the ICC is on a good path'. The Court is doing more than ever in the concrete delivery of justice through investigations, trials and reparations. The Court and the Assembly are working closely together in the Review process, which is already yielding positive results. And the Court has survived the most challenging period of institutional threats against it since its creation." He recalled that a large number of significant judgments and decisions had been issued in the past 12 months and noted that the Court is likely heading to its busiest year yet in terms of trial activity. President Hofmański ended his remarks with a call for all stakeholders to maintain steadfast support for the ICC and its independence. "We cannot afford to compromise on the rule of law – and that is, ultimately, what the ICC represents", he said.

In his first address before the annual ASP as Prosecutor of the ICC, Prosecutor Karim A.A. Khan QC presented his vision for the Office, highlighting the main developments as well as changes already implemented since he assumed office in June 2021, and envisaged for the future, calling for a new era of engagement and support for the ICC. "I am honoured to take part in the twentieth session of the Assembly of States Parties as the new Prosecutor of the ICC. With renewed energy and a clear sense of purpose, I am committed – together with my team – to build on the past, and enhance the delivery of justice for the victims of atrocity crimes. To succeed will require working together. The vision of change that I have in mind requires us all to embrace ever wider and deeper partnership. It requires effective and meaningful collaboration with States Parties and other stakeholders of the Rome Statute family. It is a vision in which the Office renews itself and works more efficiently with ever greater quality control and in which we widen the circle of inclusivity and partnership in this common quest of humanity to erode impunity and move atrocity crimes towards extinction," stated the Prosecutor.

Addressing the ASP, the Chair of the Board of Directors of the Trust Fund for Victims (the "Fund"), Mama Koité Doumbia, said: "This will be the last time that I have this honour since the current Board of Directors is coming to the end of its term of office. With this in mind, I would like to express once more my appreciation of my fellow Board members who elected me to this position, and who have not stopped actively contributing to our work with perseverance." The Chair added: "The Trust Fund for Victims has increased its efforts to continue its work as efficiently as possible and thus ensure that reparations initiatives are provided for the victims in good time, despite the COVID-19 epidemic, which is still having a global impact." "Even when the perpetrators of the crimes concerned are prosecuted at the International Criminal Court, the harm caused to the victims of these unmeasurable crimes cannot be forgotten and must be the subject of restorative actions that will have a profound and lasting effect, both at individual and community level," declared the Chair of the Fund's Board of Directors. "This Board of Directors, passing on its mandate to the next Board, is convinced that the Trust Fund for Victims, will be able to fulfil its reparative justice mandate, as envisaged in the Rome Statute and in our Regulations, for the benefit and in the interest of those who, far from The Hague, suffer unremedied harm and are marginalised by unimaginable crimes, even if they were committed long ago", said the Chair of the Fund's Board of Directors.

Statement by ASP President H.E. Silvia Fernández de Gurmendi at the opening of the 20th Session of the Assembly of States Parties (available shortly)

Statement by ICC Prosecutor Karim A.A. Khan QC at the opening of the 20th Session of the Assembly of States Parties (available shortly)