Situation in the Republic of Kenya 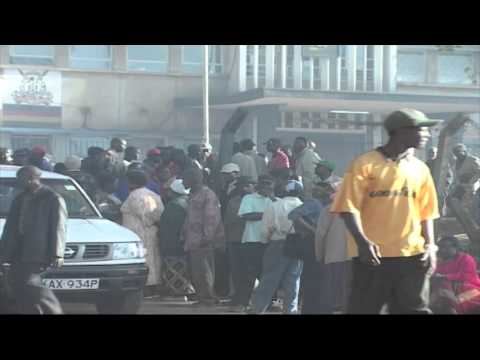 Current focus: Alleged crimes against humanity committed in the context of post-election violence in Kenya in 2007/2008.

Jurisdiction in the general situation

Kenya ratified the Rome Statute on 15 March 2005. The ICC therefore may exercise its jurisdiction over crimes listed in the Rome Statute committed on the territory of Kenya or by its nationals from 1 June 2005 onwards. On 31 March 2010, Pre-Trial Chamber II granted the Prosecutor's request to open an investigation proprio motu in the situation in Kenya, in relation to crimes against humanity within the jurisdiction of the Court committed between 1 June 2005 and 26 November 2009.

In granting the Prosecutor's request to open an investigation, the ICC Pre-Trial Chamber noted the gravity and scale of the violence. The Prosecutor contended that over 1,000 people were killed, there were over 900 acts of documented rape and sexual violence, approximately 350,000 people were displaced, and over 3,500 were seriously injured. The Chamber noted from the Prosecutor's submission "…elements of brutality, for example burning victims alive, attacking places sheltering IDPs, beheadings, and using pangas and machetes to hack people to death", and that perpetrators, among other acts, allegedly "terrorized communities by installing checkpoints where they would select their victims based on ethnicity, and hack them to death, commonly committed gang rape, genital mutilation and forced circumcision, and often forced family members to watch."

The Pre-Trial Chamber also observed victims' representations concerning the individual impact of the violence on the victims: "Complaints of harm suffered concern the inability of victims' children to continue their education, poor living conditions and health concerns in IDP camps, psychological damage such as trauma, stress, and depression, loss of income due to loss of jobs or an inability to re-establish their business, the contraction of sexually transmitted diseases after rape, abandonment after rape, and the separation of families."

The investigation has produced two main cases, originally with six suspects, involving charges which include the following crimes:

However charges were not confirmed or were withdrawn concerning these six suspects.

Proceedings in two cases involving charges against three suspects for offences against the administration of justice consisting in corruptly or attempting to corruptly influencing ICC witnesses.

This was the first situation in which the Prosecutor opened an investigation proprio motu, rather than by receiving a referral.

On 5 April 2016, Trial Chamber V(A) decided, by majority that the case against William Samoei Ruto and Joshua Arap Sang is to be terminated. The parties have not appealed this decision. Case also involved Henry Kiprono Kosgey. Judges declined to confirm the charges against Mr Kosgey on 23 January 2012.

Questions and answers arising from the decision of no-case to answer in the case of Prosecutor v. Ruto and Sang

Next steps: The case is considered closed unless and until the Prosecutor submits new evidence.

The arrest warrant was issued under seal against Mr Barasa on 2 August 2013 and unsealed on 2 October 2013.

Next steps: The case remains in the Pre-Trial stage, pending the suspect’s arrest or voluntary appearance before the Court. The ICC does not try individuals in their absence.

Next steps:  Until Philip Kipkoech Bett is arrested and transferred to the seat of the Court in The Hague, the case will remain in the Pre-Trial stage. The ICC does not try individuals unless they are present in the courtroom.

On 15 July 2021, ICC Pre-Trial Chamber A confirmed the charges of offences against the administration of justice brought by the Prosecutor against Paul Gicheru and committed him to trial.

On 15 February 2022, the trial opened before Trial Chamber III. The accused plead not-guilty to the all charges. The prosecution then presented its opening statements and called its first witness. 8 witnesses have testified for the prosecution, the last one finished testifying on 24 March 2022. The Office of the Prosecutor completed its presentation of evidence on 29 March 2022. The Defence announced on 25 April 2022 that it will not call any witnesses.

The closing statements in this case took place on 27 June 2022.

NEXT STEPS: Trial Chamber III will deliberate on the proceedings and, within a reasonable period, pronounce its decision on conviction or acquittal.